India vs Sri Lanka: Airplanes with political messages on Kashmir fly over Headingley 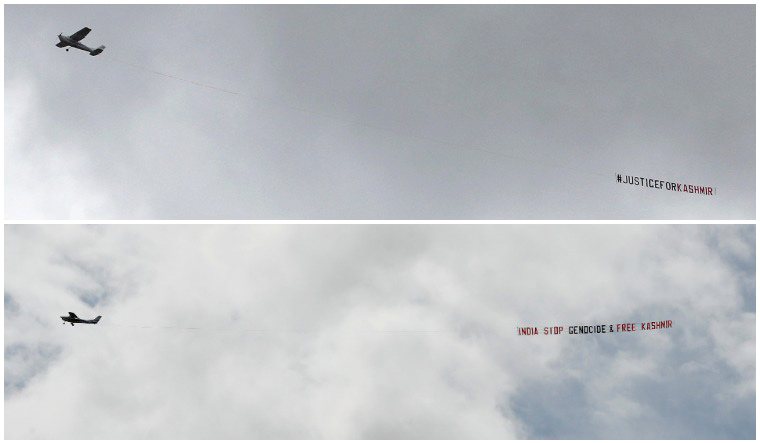 Political messages came up during India’s match against Sri Lanka despite International Cricket Council’s assurance that it would not happen again in the ongoing World Cup in England.

Airplanes with political messages first flew over the ground during the Pakistan and Afghanistan match. The airplane had raised the issue of “disappearances in Pakistan” and the Balochistan issue.

Today, airplanes with political messages flew over the Headingley stadium in Leeds where India were playing their last league match against Sri Lanka in the ongoing ICC World Cup 2019.

The incident happened when Sri Lanka were batting. First came a plane with a message “Justice for Kashmir”, followed by another which carried a slogan saying “India Stop the Genocide. Free Kashmir.”

It flew a couple of more times again—once carrying a marriage proposal for a woman named Tamara asking her to marry her boyfriend Sam, followed by an advertisement for a newly opened Islamic Store in the city.

These were followed by another political message which stated, “End Mob Lynchings in India.”

A disappointed ICC issued a statement saying that they had been assured this would not happen by West Yorkshire Police. "We are incredibly disappointed this has happened again. We do not condone any sort of political messages at the ICC Men’s Cricket World Cup.

“Throughout the tournament we have worked with local police forces around the country to prevent this type of protest occurring. After the previous incident we were assured by West Yorkshire Police there would not be repeat of this issue, so we are very dissatisfied it has happened again.”

The ICC, it is reliably learnt, had got the police authorities in Manchester and Birmingham and other venues to ensure the skies over stadia are declared no-fly zones.