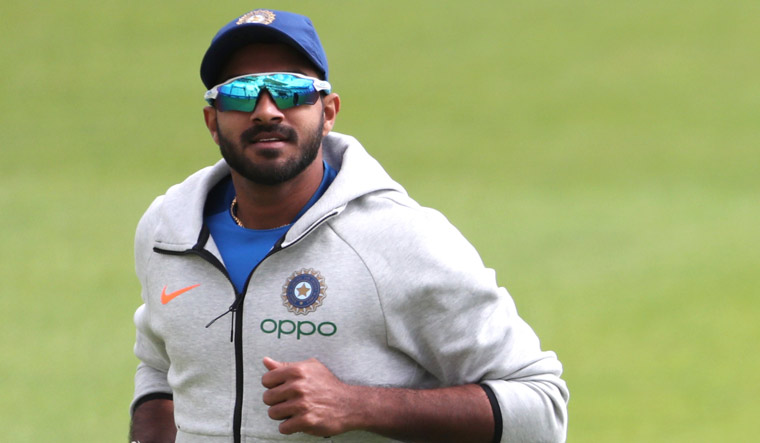 All-rounder Vijay Shankar is the latest to suffer an injury scare in the Indian camp after being hit on toe during Wednesday's training session, forcing him to skip practice on Thursday.

During Wednesday's training, a Jasprit Bumrah yorker hit Shankar flush on his toes and he was apparently in pain.

When Bumrah was asked if he would like to go a bit easy on his team's batsmen at the nets, his reply was a typical fast bowler's one.

"We don't obviously want to injure the batsman. Sometimes, when you play in the nets, nobody tells the batsmen not to hit. So they hit as well. It was unfortunate that he (Shankar) got hit. This is part and parcel of the game. But he is okay, he is fine," the fast bowler assured.

On Thursday, Shankar was seen walking around in slippers with a slight limp. Later he tried jogging wearing gym trainers but gave up after half a lap.

He then did some basic exercises as others took part in usual fielding drills as well as net sessions.

Shankar is one of the designated No. 4 batsmen in the Indian line-up although he is being used as a floater.

Shankar is also a handy medium pacer who got a couple important wickets against Pakistan, including that of skipper Sarfaraz Ahmed.

With Shikhar Dhawan already ruled out of the tournament due to thumb fracture and Bhuvneshwar Kumar out for two games due to a hamstring strain, Shankar's injury will only increase tension for the team management.

As of now Bhuvneshwar will not be bowling for eight days and will only be in contention for the England game (June 30) in Birmingham.

The team management, just like in Dhawan's case, is confident that Bhuvneshwar will be available during the business end of the tournament.

While the team management and the BCCI dilly dallied in giving a proper picture on Dhawan's injury, they are still maintaining that it is left-hamstring stiffness and not a tear for Bhuvneshwar.

In case of hamstring tear, there will be little chance of comeback for Bhuvneshwar in the World Cup.

The pacer was also seen doing a bit of short strides and jogging but didn't take part in the nets.

While Khaleel Ahmed, the stand-by pacer is with the team, in the worst case scenario if Bhuvneshwar has to be replaced, the team management can fall back on veteran Ishant Sharma as he is also among the reserves.

Bumrah expressed his sadness about Dhawan's injury that ended his World Cup but at the same time insisted that it's time to move on as Rahul is doing a good job as an opener.

"He (Dhawan) is an important member and has been doing so well for so many years. Especially in ICC tournaments, his record is so good. It's unfortunate incident that happened but you have to move forward and keep going," he said.

He said that Rahul's adaptability gives the team confidence even in crisis situations.

"It shows his ability to adjust according to any given situation. He was playing No. 4 as well and he adapted. Against Australia, he got a few balls, but he hit those balls well.

"So, he can adjust according to the situation. He can accelerate. So, it doesn't give us headache if we are facing any injury," said Bumrah.