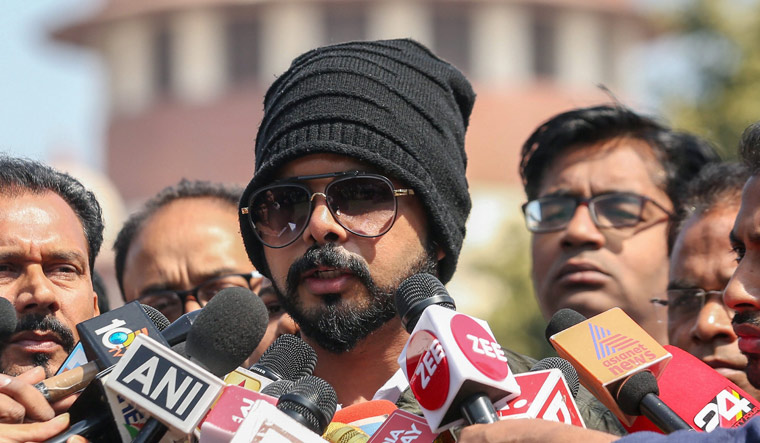 The Supreme Court on Friday said BCCI Ombudsman Justice (retd) D.K. Jain will reconsider within three months the quantum of punishment for former Indian cricketer S. Sreesanth for his alleged involvement in the 2013 IPL spot-fixing scandal.

A bench of Justices Ashok Bhushan and K.M. Joseph said this while hearing an application filed by the Board of Control for Cricket in India (BCCI).

BCCI said that since its disciplinary committee, which had earlier dealt with Sreesanth's matter, is no longer operational the matter be referred to the ombudsman appointed by the apex court.

On March 15, the top court had set aside the BCCI disciplinary committee's order imposing a life ban on Sreesanth for his alleged involvement in the matter.

The court had then said that the disciplinary committee may reconsider within three months the quantum of punishment to be given to Sreesanth.

The top court had also said that its verdict will have no effect on the criminal proceedings pending against Sreesanth in the Delhi High Court, where the Delhi Police has challenged a trial court's order discharging all accused, including him in the IPL spot-fixing case.

A single-judge bench of the Kerala High Court had lifted the life ban imposed on the 35-year-old cricketer by the BCCI and set aside all proceedings against him initiated by the board.

The division bench of the high court later restored the ban on a petition filed by the BCCI against the single-judge bench's order.

The BCCI had on February 28 told the apex court that the life ban imposed on Sreesanth was “fully sustainable in law” as he had “tried to influence” a match.

Sreesanth's lawyer had countered the arguments and had told the court that no spot-fixing took place during the IPL match and allegations levelled against the cricketer were not substantiated by evidence.

Senior advocate Parag Tripathi, appearing for the BCCI, had referred to the recorded telephonic conversations in the matter and told the court it was clear that money was demanded and was “probably received” also.

He had said there were allegations that Rs 10 lakh was paid to Sreesanth for conceding 14 runs in his second over in an Indian Premier League (IPL) match between the Rajasthan Royals and the Kings XI Punjab at Mohali in May 2013.

Sreesanth had earlier claimed in the top court that the life ban was “completely unfair” and the Delhi Police had “continuously tortured” him in custody to extract confession of his involvement in the case.

The former cricketer, who was arrested and later discharged by a trial court here in July 2015, claimed he had to confess his involvement in the alleged crime as police tortured him in custody and threatened to implicate his family in the case.

The Delhi Police had arrested Sreesanth, along with cricketers Ajit Chandila and Ankeet Chavan, and others on charges of spot-fixing.

As many as 36 accused in the spot-fixing case, including Sreesanth, Chavan and Chandila, were discharged by the trial court here in July 2015.

The BCCI, however, had refused to alter its disciplinary decision of life ban on Sreesanth even after the trial court's verdict.