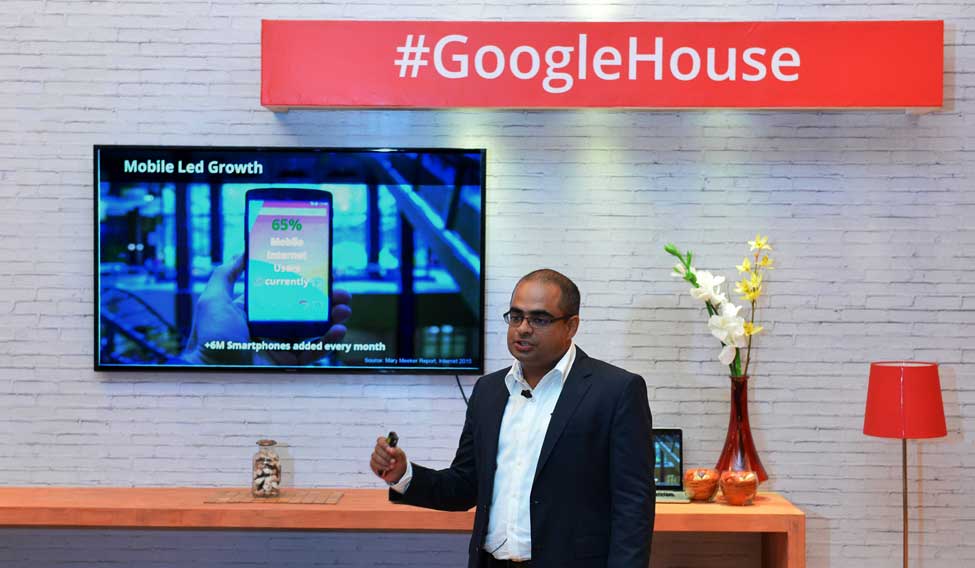 About 65 per cent of Indians access the Internet only through their mobile phones and search queries on mobile phones are exploding. Interestingly, India is adding six to seven million new mobile internet users every month. Google is just waiting to tap this growing opportunity.

As part of Google’s mobile-first product showcase for India, it organised 'Google House' in Bengaluru which featured some applications specifically targeted at the Indian market. The showcase had appearances from celebrity chef Kunal Kapur, fashion photographer Dabboo Ratnani, YouTube comedic Kanan Gill and photographer Anushka Menon. During the event, the celebrities also discussed how Google’s mobile products were helping them.

“Indians are coming online from mobile devices at an incredibly rapid rate. We are constantly working to make our products relevant and useful for India. Whether you need to get directions 10 minutes before your next meeting, a step-by-step recipe to make an impression, or a way to never be late to the airport again, Google can help keep you keep connected to the people and information that you care about,” said Sandeep Menon, Google Country Marketing Director.

The event had a hands-on showcase of a new instant translation feature in Google Translate which was recently launched in Hindi. This instantly translates printed text like street signs or ingredient lists by opening the app on the phone and pointing the camera at the text. Also showcased was a Google Photos app which automatically backs up photos and videos across all your devices. Some of the other innovations that were featured included the voice search updates to the Google app which has been optimised for English in the Indian accent and in Hindi to make finding answers to the user's questions faster. There was also an overview of some offline features such as the ability to save Maps for times when one might not have a connection or YouTube Offline, which gives one a way to watch videos even when one doesn't have a connection.

Commenting on his use of Google Search, chef Kunal Kapur said: “I travel the world meeting new people, experiencing new cultures and searching for new ingredients and culinary experiences. Sometimes when I travel I don’t even know the name of the ingredients I see in the local markets and Google Image search helps me find out what it is exactly. I also find abundance of recipes online. I also use Google Now to keep everything organised. It has helped me in managing a multi time-zone life much easier and Google Photos helps me archive and share my experiences instantly.”

Dabboo Ratnani, the Bollywood photographer said, “ I am always on the move, so it is important for me to have access to a good photo editor and for me to be able to search through and find a particular photo shoot quickly. Google Photos help me in achieving my objective.”