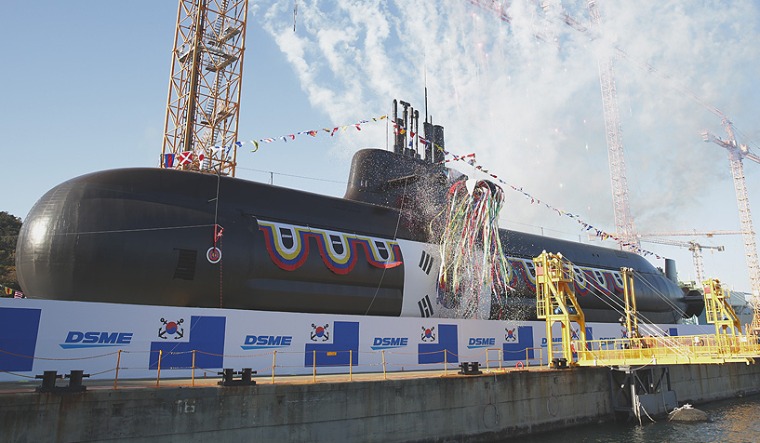 Two weeks ago, the ministry of defence approved issuance of request for proposals (RFP) to build six new conventionally powered submarines for the Indian Navy.

The Project 75 India (75I) tender, with an estimated value of around Rs 43,000 crore, envisages the construction of submarines that are larger than any of the existing class of diesel-electric submarines in the Indian Navy. The Project 75I submarines are required by the Indian Navy to have 'air-independent propulsion' (AIP), which is the capability to operate and recharge their batteries without use of atmospheric oxygen. Diesel-electric submarines typically run their diesel engines on the surface in order to recharge their batteries that are used for operations underwater. In addition, the Project 75I class submarines should also have the capability to launch land-attack cruise missiles.

The ministry of defence has earmarked state-run Mazagon Dock Shipbuilders Limited (MDL) and L&T as the shipyards that will build the chosen submarine design. Companies from Germany, Spain, Russia, France and South Korea have been shortlisted to bid in the contract.

Little over a decade ago, South Korea was barely known as an exporter of submarines. In 2011, South Korea's Daewoo Shipbuilding & Marine Engineering Co.,Ltd. (DSME) won a contract valued at $1.1 billion to supply three upgraded 'Type 209' submarines to Indonesia. The Type 209 was a German-designed submarine exported widely; its users include the Indian Navy.

Since the Indonesian contract, DSME has continued to pursue more submarine export contracts, while building the advanced Dosan Ahn Changho class of indigenously designed submarines for the Republic of Korea (ROK) Navy. The ROK Navy has a requirement for a total of nine Dosan Ahn Changho submarines, which will be built in three batches. In addition to being capable of firing torpedoes and missiles from their torpedo tubes, the Dosan Ahn Changho class is unique in having six vertical launch tubes for cruise missiles. This has been a design feature primarily seen on nuclear submarines of the US and Russia and rarely seen on diesel-electric submarines.

In 2019, media reports said DSME had made a 'surprise' entry as a bidder in the Project 75I competition.

DSME is offering to supply the Indian Navy the DSME3000, a variant of the Dosan Ahn Changho submarine. At the recent International Maritime Defense Industry Exhibition (MADEX), a defence exhibition in South Korea, DSME showcased a model of the DSME3000.

Naval News, a defence website, on Wednesday gave details of the DSME3000 submarine. The DSME3000 will have a length of 83.5 metres and a beam of 9.7 metres, making it substantially larger than the Scorpene class boats in the Indian Navy, which have a length of 67 metres and beam of 6.2 metres. The larger dimensions, typically, allow for greater fuel and equipment load and weapons storage.

The DSME representative told Naval News, "We are the most advanced in this regard amongst our competitors. We created a replica of the submarine’s battery system and completed quality control tests already. We plan on integrating the system into the second batch of Dosan Ahn Changho class submarines as well... Our lithium batteries are far more efficient than traditional lead-acid ones. This means they don’t have to be charged as often, allowing the submarine to stay submerged for longer. Moreover, they can be charged twice as often before they have to be replaced.”

The representative also mentioned the DSME3000 could be fitted with an air-independent propulsion system based on a hydrogen-oxygen fuel cell. The DSME representative claimed the DSME3000 would be "one of the most capable submarines" in terms of underwater endurance, without providing details. In December 2020, DSME announced that the first Dosan Ahn Changho submarine, which is equipped with a fuel cell system, had broken the world record for "longest continuous operation". Without giving details, DSME claimed the submarine demonstrated a 30 per cent increase in continuous underwater operation compared with similar submarines.

The ROK Navy has been using a hydrogen-oxygen fuel cell AIP system of German origin on its older Type 214 class submarines. In 2013, a German Navy submarine, the U32, which was fitted with the same fuel cell AIP system, transited from Europe to the US spending 18 days underwater. Interestingly, the DRDO is developing a phosphoric acid fuel cell that is intended to provide up to 14 days of underwater endurance for Indian Navy submarines.