In an interview with THE WEEK, DRDO chief had said work on AIP was progressing well 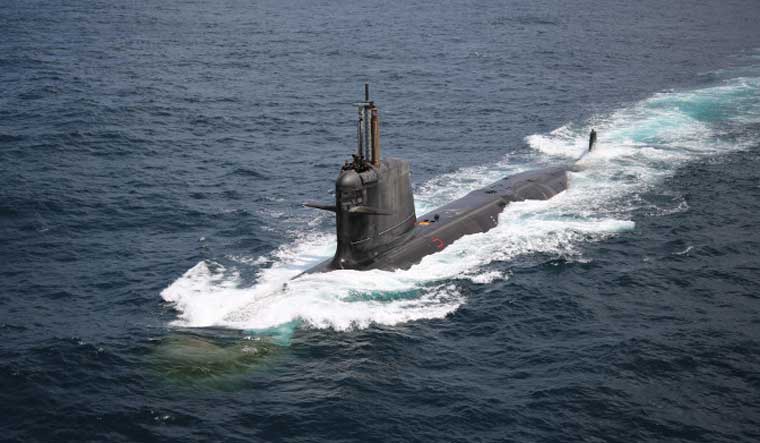 Representational image of a Scorpene submarine | via Commons

The ministry of defence has announced that Indian Navy chief Admiral Karambir Singh witnessed the operation of a land-based prototype of the module of the air-independent propulsion (AIP) system being developed by DRDO for non-nuclear submarines on Wednesday.

Air-independent propulsion is an umbrella term that refers to a range of propulsion solutions that allow conventional submarines to operate without using atmospheric oxygen. Conventional 'diesel-electric' submarines use diesel engines to move on the surface of the sea and also charge their electric batteries, which are then used for moving underwater.

While the batteries are quiet in operation and offer stealth, their endurance is limited to around 2-4 days depending on the speed of the submarines. The submarine would need to rise to the surface to run the diesel engines, which need air, to recharge the batteries. This would expose the ship to possible detection and attack from other surface ships, drones or aircraft.

There are a number of AIP systems in service or development, include a variety of fuel cells, ethanol-based systems and Stirling engines (that use liquid oxygen and diesel). Germany's HDW has equipped its new class of Type 212 and 214 submarines with a hydrogen-oxygen fuel cell system, which generates electricity through a chemical reaction between the two elements. The German AIP system is touted to offer over two weeks of underwater endurance.

The AIP module DRDO is developing is a 250KW phosphoric acid fuel cell (PACF), which uses phosphoric acid as an electrolyte that reacts with hydrogen (generated from sodium borohydride) and liquid oxygen to generate electricity. The DRDO fuel cell aims to give endurance of up to 14 days to a conventional submarine.

The DRDO began work on its fuel cell AIP system in 2010, with 30 per cent funding from the DRDO. The work was primarily done by Naval Materials Research Laboratory in Ambarnath, Maharashtra, which was visited by Admiral Singh on Wednesday. The DRDO AIP system has been touted as being more efficient and providing more endurance than the MESMA system offered by France for the Scorpene class of submarines. The MESMA system burns ethanol with liquid oxygen to generate heat to drive a steam turbine. Incidentally, the MESMA system was exported to Pakistan in the past decade. Pakistan Navy has installed MESMA on three of its submarines.

The Indian Navy hopes to refit the AIP system on all six of its Scorpene submarines over the next decade.

In an exclusive interview with THE WEEK, DRDO chief G. Satheesh Reddy had said, “work on indigenous air-independent propulsion systems is progressing well”.