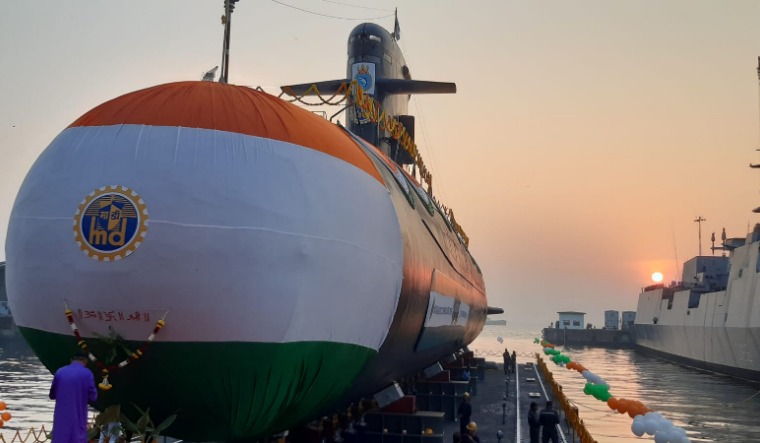 After years of deliberation, the Indian Defence Ministry on Friday finally cleared the decks for the Rs 43,000 crore project to domestically construct six new-generation stealth submarines with foreign collaboration.

Project "75 India" was initiated way back in November 2007 to get six conventional submarines with better sensors and weapons and an air-independent propulsion system (AIP)—all of which was to be manufactured in the country. But, it will take close to a decade for the delivery of the first submarine from this contract, due to procedural issues, a naval officer explains.

The Defence Acquisition Council (DAC) headed by Rajnath Singh today approved the issue of RFP (request for proposal) for Project P 75 (I) under the Strategic Partnership (SP) Model. DAC, which is the highest body on acquisition matters, had already short-listed Mazagon Dock and private shipbuilder Larsen & Toubro (L&T) for the contract.

Explaining the procedure, a senior defence official said that the MDL and L&T will tie up with one of the shortlisted foreign firms to submit their financial and technical bids.

Naval Group-DCNS of France, which is currently building six Scorpene-class submarines at Mazagon Dockyards Limited in Mumbai under Project 75 is amongst the five foreign shipbuilders including ThyssenKrupp Marine Systems from Germany, Navantia from Spain, Daewoo of South Korea and Rosoboronexport/Rubin Design Bureau from Russia, are in the race for the upcoming project.

As the navy's plan, the new six submarines will be nearly 50 per cent larger than its Scorpene-class submarines and capable of carrying and launching 18 heavyweight torpedoes at sea. Besides, to have more lethal firepower, the next generation, submarines must be equipped with at least 12 land-attack cruise missiles (LACM) and anti-ship cruise missiles.

Three Scorpene-class submarines, INS Karanj, INS Khanderi and INS Kalveri, have already joined the Indian Navy. The fourth and fifth submarines—Vela and Vagir—are undergoing sea trials. The Vagsheer, the last of its class, is under construction.

"This would be one of the largest ‘Make in India’ projects and will serve to facilitate faster and more significant absorption of technology and create a tiered industrial ecosystem for submarine construction in India," the Ministry of Defence said in a statement.

And, from a strategic perspective, this will help reduce current dependence on imports and gradually ensure greater self-reliance and dependability of supplies from indigenous sources.

Project 75 India under the SP Model provides a long-term opportunity and planning certainty for the industry to invest and support submarine construction, according to the statement issued by the MoD.

"It will also infuse the latest technology and weaponry for submarines in India through strategic tie-up between Indian Industry and leading foreign OEMs (original equipment manufacturers)," MoD statement said.

MoD claims that with the accord of this approval, the country will be enabled to achieve its 30-year Submarine construction programme envisioned by the Government to acquire national competence in submarine construction and for the Indian industry to independently design and construct submarines in India.

Though India has the largest coastline of 7,516 km among any other maritime state with its blue water navy ambitions, its underwater capability is nowhere close to its needs. Ideally, the Indian Navy needs at least 24 submarines to meet its 30-year submarine-building plan, which was approved by the cabinet committee on security in 1999, months after the Kargil conflict.

While China operates 65 submarines, the Navy’s fleet of attack submarines, all diesel-powered, has come down from 21 in the 1980s to just 15 at present. And only eight battle-ready submarines are available at any given time, as half of its fleet undergoes mid-life upgrades.

In 2019, the cabinet committee on security approved a programme to build six nuclear-powered attack submarines, costing an estimated Rs 90,000 crore as an answer to Beijing’s naval might. But experts believe that the project will take at least a decade to complete.