Earlier, it was too dangerous for scientists to get samples of such material 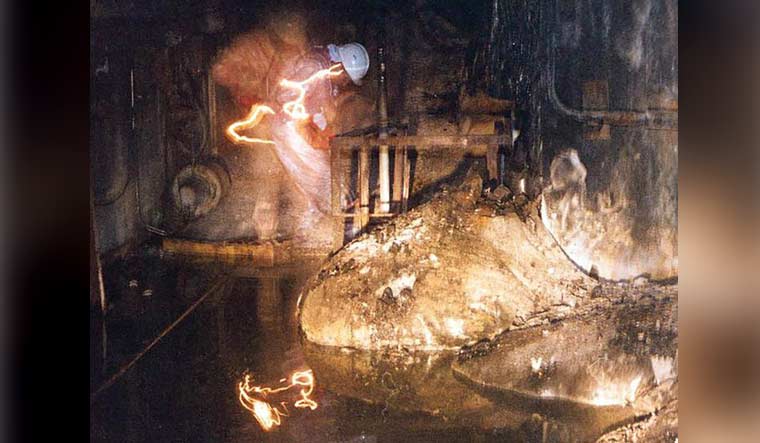 Representational: A photograph of Artur Korneyev inspecting the molten corium in Chernobyl's reactor | US Dept of Energy

It is said that the deadliest object on earth is the so-called ‘elephant’s foot’ in the reactor room of the Chernobyl nuclear plant. Resembling an elephant's foot at one part, it is lava made up of extremely-radioactive corium—A mixture of molten nuclear fuel, cladding, steel, concrete and sand.

A popular internet rumour is that the mass is so deadly that if one were to get close enough to even see it, they would receive a fatal dose of radiation. Its nickname—Medusa—aptly references the Greek monster, who could turn to stone those who simply looked at her.

While it was once so, some have entered and approached the lava since the 1986 nuclear disaster, most notably, Artur Korneyev, who took the photograph of the sludge and has entered the core more than anyone else.

For decades, however, the core of reactor 4, which triggered the Chernobyl disaster, has been a highly hazardous place for containment crews. Though the neighbouring areas have been evacuated, and the building itself placed under a giant concrete sarcophagus that allows observation, the molten nuclear fuel has proven too dangerous to extract or remove.

Nearly 100 tons of this melted nuclear fuel—dubbed Lava-like Fuel-Containing Material (LFCM)—flowed through the reactor building. Emitting what was estimated to be over 8,000 roentgens an hour in 1986, it is popularly considered to be the most toxic mass on earth. It will continue to be radioactive for over 100,000 years, perhaps more.

Getting a sample of such material to study has proved highly risky—the Soviets resorted to firing at the mass with armour-piercing AKM rounds to break off a small chunk. In Fukushima, nobody has yet managed to retrieve samples of the corium inside the reactors that underwent a meltdown in 2011.

But, there may be another way.

A team of researchers from Sheffield University’s Department of Materials Science and Engineering, in collaboration with scientists in Ukraine, have managed to simulate the nuclear lava that it is composed of, for the first time ever. The findings, published in the journal, Nature Materials Degradation, could allow scientists to evaluate methods of handling such deadly waste, and hopefully, develop a way to deal with the nuclear lava present in both Chernobyl in Ukraine and in Fukushima in Japan.

Dr Claire Corkhill and her team from @msesheffield have produced materials that could help with the clear up of the Chernobyl and Fukushima nuclear disasters.
Find out more 👇https://t.co/t7vzrautKR pic.twitter.com/me5JAlk0k3

The materials, produced by Dr Claire Corkhill and her team from the University’s Department of Materials Science and Engineering, in collaboration with scientists in Ukraine, can simulate the Lava-like Fuel Containing Materials (LFCMs) that are obstructing decommissioning efforts at the nuclear disaster sites.

Made by studying the sample broken off from the Chernobyl reactor room, the scientists combined uranium dioxide fuel, zirconium fuel cladding, stainless steel and concrete under high temperates to create a low-radioactive sample with similar physical properties.

Published in the journal Nature Materials Degradation, the development is the first time a close approximation of a real LFCM has ever been achieved.

Says Dr Claire Corkhill, whose team worked on producing the materials, “The major difficulty in understanding the real materials is that they are too hazardous to handle and, although the Chernobyl accident happened over 33 years ago, we still know very little about these truly unique nuclear materials.”

“Thanks to this research, we now have a much lower radioactivity simulant meltdown material to investigate, which is safe for our collaborators in Ukraine and Japan to research without the need for radiation shielding. Ultimately this will help advance the decommissioning operations at Chernobyl and also at Fukushima too.”

The investigation into the corrosion behaviour needs a lot more work, but having established a starting point, the research team hopes to advance this work quite rapidly. Dr Corkhill noted: “Since the clean-up of Chernobyl is anticipated to take around 100 years, and Fukushima at least 50 years, anything we can do to speed up the process will be beneficial to Ukraine and Japan, in both financial and safety terms.”