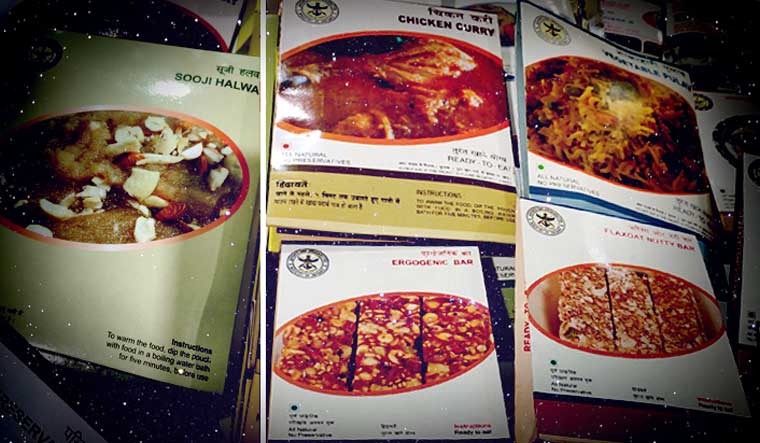 Representational image of the packaged food items that DRDO has prepared for soldiers, some of which could make its way into space, once reconstituted as rations for the Gaganyaan astronauts | Rekha Dixit

Idli or upma for breakfast. A choice between chicken biryani or vegetarian pulao, with a side of dal and mixed vegetables for lunch. How about a chicken korma and chappati for dinner? Sooji halwa is a good dessert option, and you could nibble on an energy bar when you feel peckish.

Sorry, this is a non-smoking, non-alcohol flight, but you could help yourself to coffee or tea, or a choice of fruit juices. All this, and more, could be available in space through ISRO's Gaganyaan programme.

Gaganyaan is India's first human space flight. Scheduled to take off before 2022, it will offer a gourmet spread of Indian food for its pioneering astronauts courtesy the Defence Research Development Organisation (DRDO), which has been tasked with organising the victuals for the week-long flight.

While DRDO is busy designing menus, its Mysore-based Defence Food Research Laboratory (DFRL) works on adapting a range of packaged food items that it makes for soldiers deployed on harsh missions. 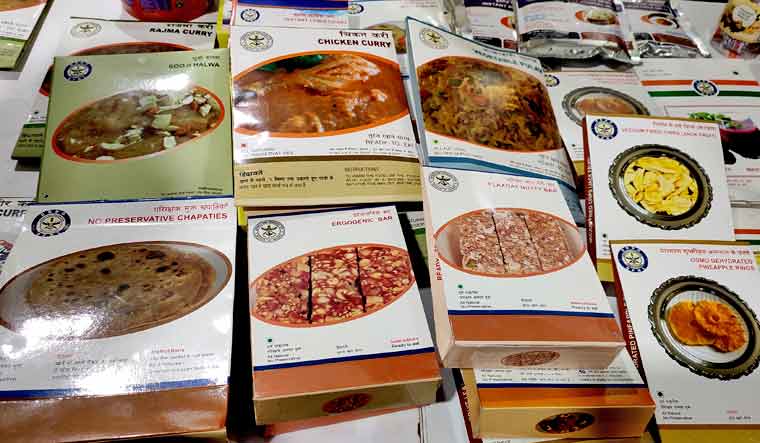 Some of the Indian food items being considered to serve as part of the Gaganyaan menu, pending modifications to suit the conditions in space| Rekha Dixit

A list of over two dozen items that includes cuisines from across India is being worked on. "We hope to get an initial set of food items ready to be taken off on the first of the three flights,'' said D. Semwal, DFRL director. Mission Gaganyaan includes a set of three flights; the first two will be unmanned ones, and only the third will have a human crew, of two or three astronauts. Four test pilots of the Indian Air Force have been selected from an initial shortlist of ten for further training for the flight.

While there is a range of space food available, with humans having voyaged for over six decades and many having spent months in space stations like the International Space Station, Gaganyaan is a platform to adapt Indian cuisines, the Indian way, for space flights. "We are keeping our food items mildly spiced, though there will be extra spice sachets for those who want them,'' Semwal said here in Bengaluru, at the Pride of India exhibition of the 107th Indian Science Congress.

The food packs will be desicated, requiring reconstitution through the addition of water. In the zero-gravity environment of the space module, water will have to be added within a contained space, so that the droplets do not float all around the spaceship.

The shortlisted food items have been carefully selected. Bread, for instance, is not on the list, because it tends to crumble, and those crumbs can be an annoyance.

The drinks will come with special straws that flap back after a sip, so that the droplets from the sachet remain within. A team of 20 scientists at the Mysore laboratory are working on the design of these straws, the sachets, and even the bins in which the food remains can be safely trashed.

The specifications of space food are different from packed army rations. One advantage with a short flight is that the food does not need to last for several weeks. So, it can be packaged in a semi-solid form, and not be entirely dry. On the other hand, the food will have to be reconstituted under pressure. The laboratory wants to meet the NASA standards of food quality and packaging, which are deemed the best in the world for space fare.

An army marches on its stomach—and so do astronauts. Gaganyaan's payload will include 60 kgs of rations in dry weight and another 100 litres of water. 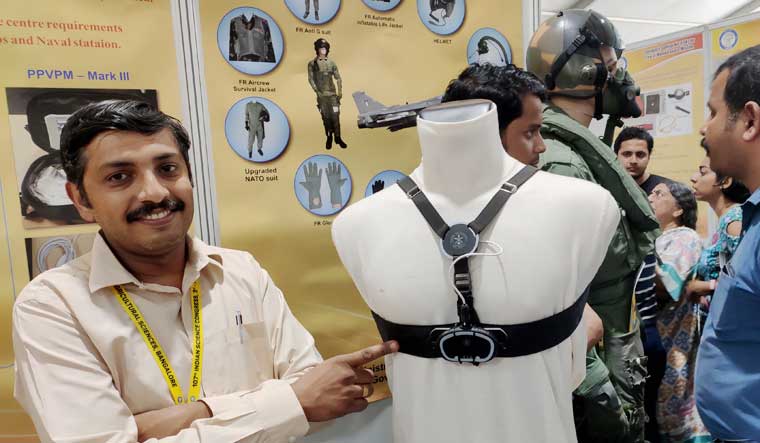 DRDO laboratories are also designing other components of Gaganyaan. The Bangalore-based Defence Bioengineering and Electromedical Laboratory (DEBEL) is working on a Wearable Remote Physiological Monitoring System, commonly known as the Bio Vest. This is actually a belt that the wearer straps onto the body. It is equipped with devices to continuously monitor the basic physiological parameters—heart rate, temperature and oxygen saturation in the blood, known as SPO2. The data will be transmitted wirelessly to earth receiving stations. DEBEL, having already made such devices for soldiers, needs to adapt them for space conditions. The bio vest will weigh less than 250g and will be delivered before December to the Institute of Aviation Medicine.

DEBEL is also designing the Emergency Survival Kit, a case of 18 items required to see the astronauts through for at least 72 hours post landing. It is designed primarily for a sea landing and will meet the requirement of a crew of three. The items include:

Floatation and navigation aids: A compass and a three-man raft

Each of these items is being tested for space conditions.

In the meanwhile, the Aerial Delivery Research and Development Establishment is readying the parachutes that will be required for landing the crew module at the end of the mission. Last month, the establishment celebrated a successful test run of the design of the parachute system. The fabrication and testing of the actual parachutes are now under progress.

Gaganyaan's landing will be coordinated with a set of six parachutes of different sizes and shapes, which will unfurl in pairs to reduce the speed of the module during descent. The smallest parachutes, or pilots, each of a two-metre diameter, will open out first. They will then pull out the drogue or central parachutes, each having a diameter of six metres. Finally, the pair of main parachutes of 31-metre diameter will open up.

The weight of the crew module is around four tonnes, and DRDO has already landed heavier weights—tanks of seven and 16 tonnes—so it is pretty confident of handling the weight. It needs to cater to other requirements, though. The crew module will enter into the atmosphere at supersonic speed; in traditional parachuting, the speeds are sub sonic. The descent also has to be a comfortable one for the men, for which the oscillations have to be minimised, said scientist Sandeep Kumar.