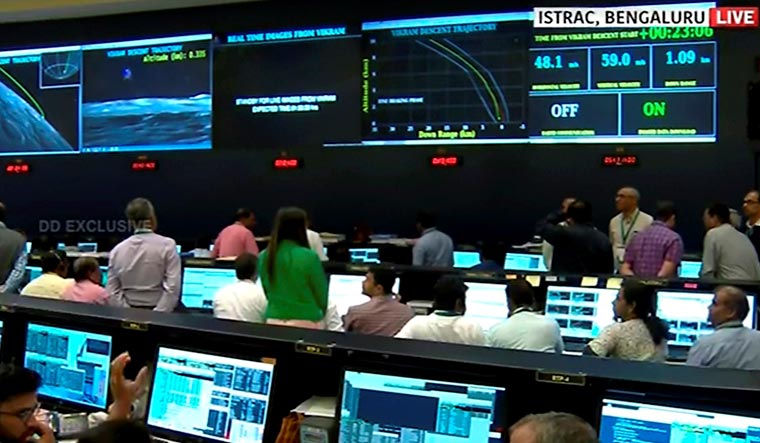 Officials watch live telecast of the soft landing of Vikram module of Chandrayaan 2 on lunar surface as it starts 'fine breaking' at ISRO Telemetry Tracking and Command Network (ISTRAC), in Bengaluru, Saturday | PTI

Former ISRO Chairman G Madhavan Nair said on Saturday the Chandrayaan-2 has achieved 95 per cent of its mission objectives, the lander's unsuccessful bid to touch-down on the Lunar surface notwithstanding.

The former Secretary in the Department of Space and ex-Space Commission Chairman noted that the orbiter is healthy and functioning normally in the Lunar orbit, and that Chandrayaan-2 had multiple objectives, including soft-landing. "I think we need not worry too much...I will rate more than 95 per cent of the mission objectives have been achieved," Nair told PTI after lander 'Vikram' lost contact with ground-stations during final descent to the Lunar surface in the early hours of Saturday.

"Already, orbiter is in space and it should do an excellent job of mapping", he added. Chandrayaan-2, a follow-on mission to theChandrayaan-1 mission undertaken more than a decade ago,comprises an orbiter, lander (Vikram) and rover (Pragyan). The 2379-kg orbiter, with designed mission life of one year, carries eight scientific payloads for mapping the lunar surface and study the exosphere (outer atmosphere) of the Moon.

The orbiter payloads will conduct remote-sensing observations from a 100 km orbit.

According to ISRO, the lander carried three scientific payloads toconduct surface and subsurface science experiments, while therover carried two payloads to enhance our understanding of the lunar surface.

Nevertheless, Nair said the lander's contact-loss was highly disappointing, and he never expected such a scenario.

"It's disappointing for all of us. The entire country was looking forward to it." He said the entire mission -- from the launch till the lander lost its communication with ground-stations at an altitude of to 2.1 km from the Moon's surface -- went like text-book precision.

"When you look at operation 2.1 km down below, it's really complex; half of us were keeping our fingers crossed because there are several instruments and thrusters will have to work very precisely; only then the final objective can be achieved," the former ISRO Chief said.

"If you start listing, there are at least ten points where it could have gone wrong. What has really gone wrong is difficult to predict now", he said.

"Only thing is in the last ten seconds (of the mission), there was a deviation in the trajectory and velocity path.

Looking at the data available till that point I am sure ISRO will be able to identify (where things went wrong)," he added.

There could be any number of reasons, including sensor failure, on-board software anomaly and thrust deviation, for the loss of communication.

Earlier in the day, contact from the lander to the ground stations was lost during its powered descent to the Lunar surface minutes before the planned touch-down.

"Vikram lander descent was as planned and normal performance was observed up to an altitude of 2.1 km.

Subsequently, the communication from the lander to ground-stations was lost," ISRO chief K Sivan said. "The data is being analysed," he added.

Speaking to PTI, a senior official closely associated with the mission, said ISRO may have lost the lander and Pragyan rover housed inside it.

"There is no communication with the lander.It's as good as lost. There is no hope. Very, very difficult to re-establish contact," the official said.