Navy to get home-made aircraft carrier by 2020 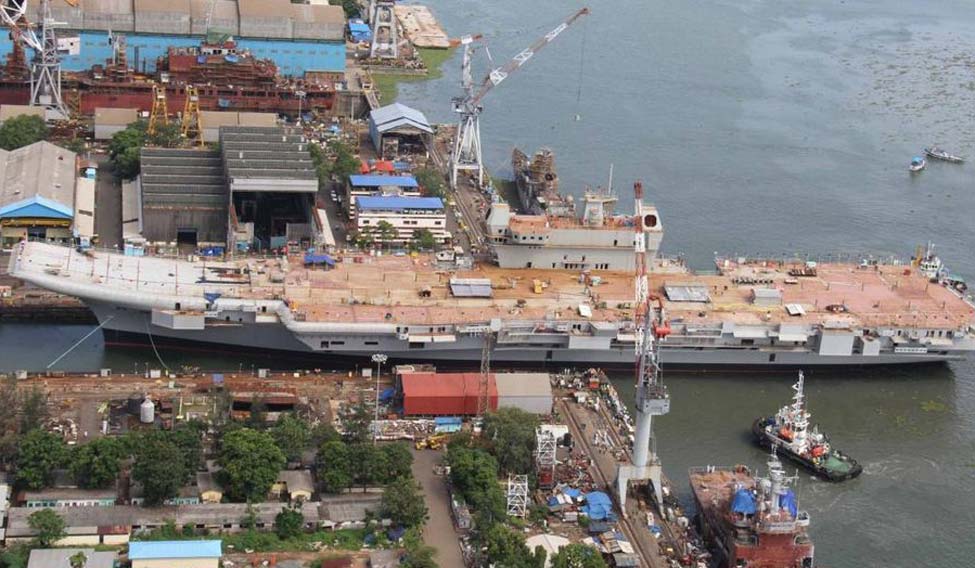 The country's first Indigenous Aircraft Carrier (IAC-1), which is being built in Cochin Shipyard, will finally join the Navy fleet by October 2020.

The long-delayed 40,000-ton warship was scheduled to be ready by the end of 2018, but due to delay in procuring equipment related to aviation complex from Russia, delivery date has been extended. After commissioning, the IAC will be formally named as INS Vikrant.

With this, India will join the elite group possessing indigenous built aircraft carriers, as other than Indian Navy, only the US, Russia, Britain and France have capacity to design and build aircraft carriers of 40,000 tonnes and heavier.

Projecting Make In India, a model of IAC- I will be showcased in the Indian Navy Tableaux in the upcoming Republic Day parade. The Indian Navy is presently operating with a single aircraft carrier—INS Vikramadatiya.

Talking to THE WEEK, principal director of naval design, Commodore J. Chowdhary said construction of aircraft carrier will be completed by early 2019 and then the Navy will start its sea and harbour trials before commissioning it into its fleet.

"IAC-1 will formally join the Navy fleet by October 2020 after completing all its trials. Construction of the warship is in full swing in the Cochin Shipyard," Commodore Chowdhary said.

Naval officials claim that delay happened due to non-availability of 18 types of major equipment related to aviation complex of the aircraft carrier from Russia.

With its length of 260 meters, the warship would have two take-off runways and a landing strip with three arrester wires capable of operating a STOBAR (short take off but arrested delivery) aircraft and a range of helicopters. 20 MiG 29 K fighter jet and 10 helicopters will be deployed on the aircraft carrier. Earlier, the Navy had plans to put indigenous naval version of Light Combat Aircraft Tejas on the warship. However, last year, the Navy dumped the programme after the fighter jet failed to meet the carrier capability required by the Indian Navy. Now, the Navy will have to depend on Russian made MiG-29K for its warship.

According to the naval officials, the design of IAC-1, with the cost of Rs. 3500 crore, was initially approved by the ministry of defence in the year 2003, but the construction only began in 2005 in Cochin Shipyard. IAC was scheduled to be launched in water by 2010, but it could only manage to launch in August 2013, after three years of delays.

In fact, repeated delay in the aircraft carrier has led to heavy cost over run, which was nearly 600 per cent. While deposing before the parliamentary standing committee on defence, naval officials claimed that procedural and administrative delays from the Russian side escalated the cost of Indian Aircraft Carrier (IAC) from Rs 3,261 crore to Rs 19,341 crore. The Navy maintained that due to non-availability of Russian steel, delay in receipt of critical pre-launch equipment such as gear box and 3MW diesel generators, project was running late.

Your form could not be submitted.
This browser settings will not support to add bookmarks programmatically. Please press Ctrl+D or change settings to bookmark this page.
Topics : #Navy | #defence