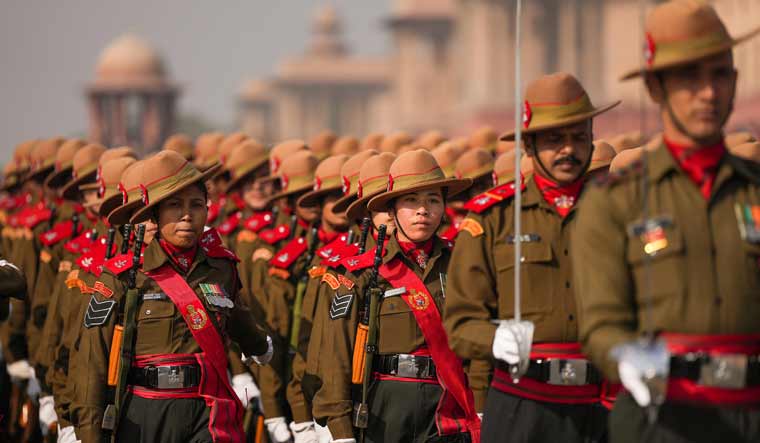 In an unprecedented initiative, the Republic Day parade in Delhi's Kartavya Path on Thursday will see a mixed contingent of the Assam Rifles, featuring equal number of riflemen and riflewomen. The 144-strong contingent will be led by Captain Akshay.

Calling it a sui generis initiative, the Assam Rifles said it was part of the force's renewed focus on gender equality. "The contingent will be led by Captain Akshay and will comprise of soldiers recruited from all over the country thus strengthening the belief in unity in diversity. The mixed marching contingent of men and women of Assam Rifles marching shoulder to shoulder is the epitome of ethos of the force of equal opportunity to all," said a spokesperson of Assam Rifles. The Force, with a rich history of 187 years, will be the first in the country to implement this on Republic Day.

"The force has now evolved itself into a modern and operationally efficient outfit, capable of responding to any challenges with elan and alacrity,” he said.

A senior officer, while describing the force, said the Assam Rifles is a local folklore often said in the remote corners of the North East.

"Whether it was the World Wars, Chinese aggression of 1962, insurgency in northeast or disasters due to natural calamities. On Republic Day the smartly attired soldiers of the Force will be watched fondly by their friends in the northeast with whom their relationship is everlasting," he said.

"The contingent will also be watched from our northern borders of J&K where Assam Rifles has been fostering a new bond since 2020 with the locals. Very recently Assam Rifles rescued more than 172 civilians at the Zozila Tunnel site who were trapped due to an avalanche. The Force is carving a new niche for itself in J&K both in operations and also winning the hearts and minds of the people," said the officer.

The marching contingent on Republic Day at Kartavya Path is also symbolic of the government's Act East Policy.