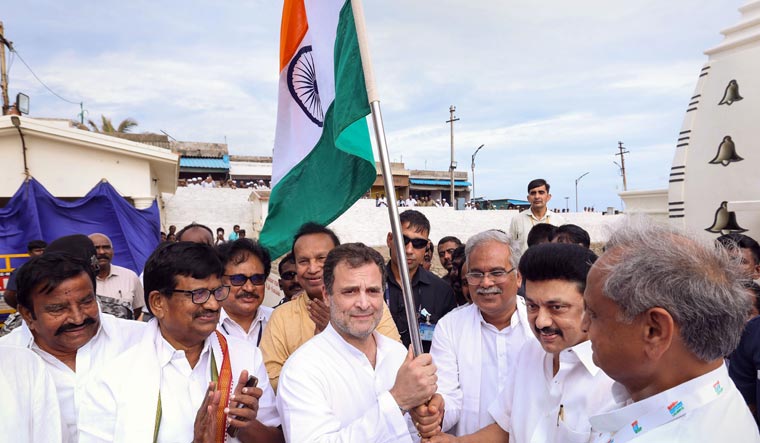 Though the Gandhis have made it clear that they are not backing any candidate officially in the election to the post of Congress President, the widespread feeling in the party is that Rajasthan Chief Minister Ashok Gehlot has their undeclared backing. He has gone ahead, and through his actions and words, conveyed that is the case.

Gehlot has repeatedly stated about entering the fray for the post of party president that he will go by the directive of the party leadership. And by doing so, he has projected himself as the choice of the Gandhis, especially party chief Sonia Gandhi, with whom he has had meetings in the run-up to the polls.

The 71-year-old leader, who is expected to file his nomination papers early next week, has also done his bit to project himself as a loyalist of the Gandhi family. As the buzz about him contesting the elections had become intense, he kept on insisting that he would till the very last try to persuade former Congress President Rahul Gandhi to make a comeback at the helm.

After his meeting with Rahul in Kochi on the sidelines of the Bharat Jodo Yatra, Gehlot finally declared that he would be filing his nomination for the election since the former party chief had not changed his stand regarding either him or any other member of the Gandhi family becoming the next party president. The message he sought to convey was that he was entering the fray as a choice of the Gandhis, with their assent and in solidarity with them.

By doing so, he has also drawn contrast between his loyalist image and Thiruvananthapuram MP Shashi Tharoor, who has made his intent to contest clear and whose representatives today collected the nomination papers from the AICC headquarters. Tharoor was one of the signatories of the letter written by the so-called 'Group of 23' to Sonia demanding reforms in the party.

Gehlot, has in recent times, especially in the wake of the dissent expressed by the G-23, been one of the most vociferous supporters of the first family of the party. He also played a lead role in mobilising support for the Gandhis on the streets of Delhi when Sonia and Rahul were summoned by the Enforcement Directorate for questioning in connection with the National Herald case.

The neutral stance of the Gandhi family is an effort aimed at ensuring that the election is seen as providing the contestants with a level playing field. It is significant especially in the backdrop of the family's critics saying that the new president will be a puppet in their hands.

However, Gehlot is going ahead and making it known to the voters in the election that his USP is his loyalist tag.