'Jungle raaj was in Gujarat': Lalu slams Amit Shah for remarks on Bihar 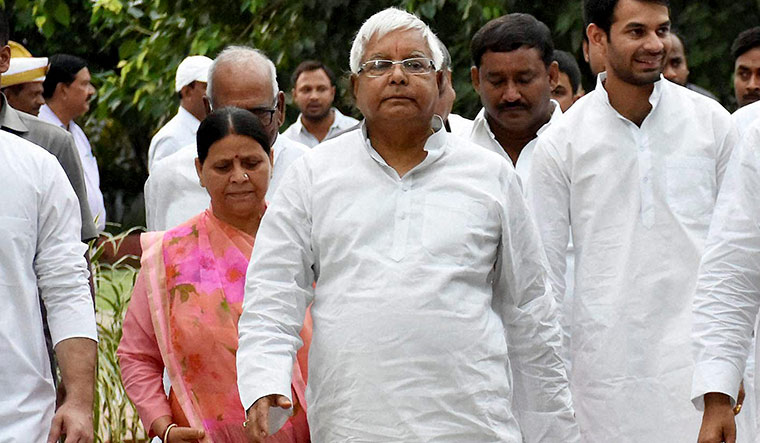 RJD president Lalu Prasad Yadav on Saturday lashed out at Home Minister Amit Shah over his "jungle raaj" jibe on Bihar's ruling alliance and stressed on the need for Opposition unity, a day before he meets Congress leader Sonia Gandhi along with Chief Minister Nitish Kumar.

"Amit Shah has totally gone crazy. His government has been removed there (Bihar). It (BJP) will face a rout in 2024 as well. That is why he is going there running and speaking of 'jungle raaj' and all those things. What did he do when he was in Gujarat," Yadav told reporters in the national capital.

"Jungle raaj was in Gujarat when he was there," the former Bihar chief minister alleged.

"Amit Shah bilkul paglaye hue hain," he said, speaking in Hindi, when asked about Shah's 'jungle raaj' barb at the state government on Friday in his Purnea rally where he went hammer and tongs after Kumar and Yadav.

Asked about the home minister's claim that the BJP will form the government at the Centre in 2024 again and then in Bihar the next year, he quipped, "We will see that."

With the BJP saying that Kumar will dump the RJD later in his pursuit of power, Yadav asserted they are together now.

"We are making every effort for Opposition unity," Yadav, who has been battling poor health, said, adding this will be the agenda of their meeting.

Earlier in Patna, Yadav predicted a wipeout for the BJP in the 2024 polls. "Don't worry, the BJP will be wiped out (safaya ho jaega)," he said.

His legal troubles and falling health have kept the charismatic leader mostly away from the daily grind of active politics as his son and Deputy Chief Minister Tejashwi Yadav has emerged as the RJD's de facto leader.

Shah on Friday had flayed former ally Nitish Kumar, accusing the Bihar chief minister of backstabbing the BJP and trying to fulfil his prime ministerial ambitions while "sitting in the laps of Congress and RJD".

At a rally held in Purnea, Shah asserted the combine of Kumar and RJD president Lalu Prasad will be "wiped out (soopda saaf)" in the 2024 Lok Sabha polls and, a year later, the BJP will win a majority on its own in the state assembly elections.

Bihar does not want the grand alliance's "jungle raaj", he had said.