Talks under way between India and Pakistan on flood aid relief: Report

The death toll from the devastating floods in Pakistan reached 1,136 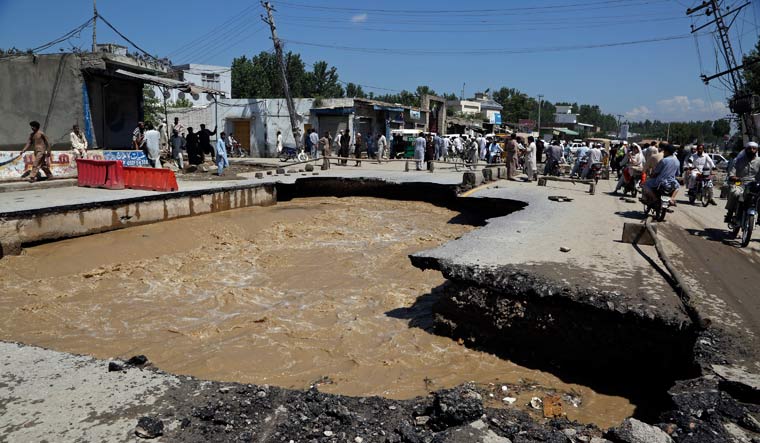 A road damaged from flooding on the outskirts of Peshawar, Pakistan | AP

After Prime Minister Narendra Modi expressed his condolences to the bereaved in the devastating Pakistan floods, discussions are underway at the highest levels on the possibility of extending humanitarian assistance to Pakistan, The Indian Express reported. "Saddened to see the devastation caused by the floods in Pakistan. We extend our heartfelt condolences to the families of the victims, the injured, and to all those affected by this natural calamity and hope for an early restoration of normalcy," Modi said in a tweet.

The death toll from the floods in Pakistan reached 1,136, as international aid began trickling in following Prime Minister Shehbaz Sharif-led cash-strapped government's desperate appeal for aid to deal with the crisis that has displaced 33 million or one-seventh of the country's population. Pakistan's Climate Change Minister Sherry Rehman called it the "monster monsoon of the decade," while Finance Minister Miftah Ismail said the floods have impacted Pakistan's economy by $10 billion.

Planning Minister Ahsan Iqbal said that the country has suffered economic losses of over $10 billion due to rains and floods that inundated vast areas, affecting millions of people. The minister told the media that more than five years would be needed to rebuild the country. He said that the preliminary assessment showed that the losses were huge.

At least 1,136 have been killed due to floods and another 1,634 injured, according to the latest data issued by the National Disaster Management Authority, the chief national body tasked to deal with calamities. It said that about 1,051,570 houses were totally or partially damaged, leaving millions of people without food, clean drinking water and shelter.

Around 7,19,558 livestock are also dead, as millions of acres of fertile farmlands have been inundated by weeks of constant rains. At least 11 people, including women and a child, were drowned and several others remained missing when a boat carrying 30 flood victims capsized in the swollen Indus river in Sindh's Sehwan on Monday. The incident happened when the people affected by the floods were migrating from submerged villages to a safer location.