BJP vs TRS: Hindutva nationalism vs Telangana regionalism in the making 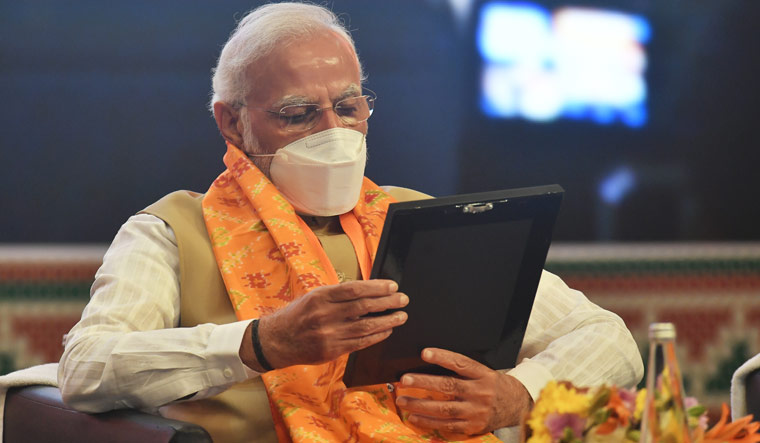 A star-studded BJP with Prime Minister Narendra Modi, chief ministers and other top party leaders has blown the conch shell in Telangana, signalling a psychological war against the ruling Telangana Rashtra Samithi (TRS), on the sidelines of their National Executive Committee (NEC) meeting in Hyderabad. The aggressive stand taken by the national BJP leaders in the run-up to the event makes their parallel agenda overtly clear. The party once again has attached importance to the names.

Former Jharkhand CM and senior BJP leader Raghubar Das said Hyderabad would be renamed Bhagyanagar if the BJP comes to power. BJP Chief J.P. Nadda inaugurated Gollakonda photo exhibition of the Telangana martyrs at the meeting venue, choosing to send out a message by ignoring the corrupted and widely used term ‘Golkonda’ which was associated with the Qutb Shahi kings who ruled the Deccan region. The saffron leaders also intend to invoke former home minister Sardar Vallabhbhai Patel and highlight his contribution to nationalism in driving out Nizam from power in Hyderabad state.

The Hindutva flavour to the BJP’s campaign will be further intensified with the visit of Uttar Pradesh CM Yogi Adityanath to the controversial Bhagyalakshmi temple, abutting Charminar in the olden parts of Hyderabad. The large contingent of the BJP members are not shying away from announcing that Telangana is the next target. A systematic media campaign has also been unleashed as a number of news reports have appeared highlighting BJP’s focus on upcoming Telangana elections.

With just 3 MLAs in the 119-members Assembly, the BJP has managed to generate a lot of hype in the state. Through the NEC and a public meeting to be attended by PM Modi in the heart of Hyderabad, the party wants to give out a message to the cadre that they have their backing to go all out in their fight against the TRS, say party insiders. The BJP has never been in power in the state or considered a formidable force in the past. The lack of experienced or powerful faces is a drawback which the party wants to overcome by airdropping big names of national repute to match the stature of Chief Minister K. Chandrashekar Rao. In the last Greater Hyderabad Municipal elections, the BJP’s strategy of hype and Hindutva agenda worked perfectly well as it surpassed its own expectations almost giving a scare to the TRS. Fresh from the success of operation Maharashtra, the BJP camp is hopeful that a few well-known names from other parties will switch sides. Apart from attacking the family rule of KCR and his party’s proximity to MIM, the BJP wants the local voters to be apprised of national events and support the party on that basis.

The TRS is trying to counter the BJP blitzkrieg in its own style even though there is uneasiness within the party due to the growing clout of BJP. According to sources within the BJP and the TRS, the ruling party ensured that BJP's publicity splash across the city doesn’t go as planned. There was a jostle for hoardings and both the parties accused each other of playing spoilsport and in the end illegally erected posters and banners adorned the city. The TRS tried to win the optics war on the day Modi landed in the city as the party took out a huge rally to welcome opposition's Presidential candidate Yashwant Sinha. Chief Minister Rao welcomed him and participated in a meeting where he primarily targeted Modi, who is scheduled to speak at a public meeting a day later. The TRS also managed to get a few BJP corporators to join the party. The party has also indulged in anti-Modi and anti-BJP campaigns in online and offline spaces, seeking to know what he did for the state while detailing the successful initiatives of the TRS party.

To fend off attack from the BJP and thwart any serious threat, the TRS will most likely go back to its core slogan of regionalism or Telangana sentiment. The party has already started projecting the BJP as outsiders or “Delhi” party. This will only gain more traction in the coming days. According to analysts, KCR will put on the back burner the idea to start a national party as it would not be convincing to fight on national stage while projecting the BJP as outsiders in their home state. The TRS will find it challenging to demonise the BJP as a party of outsiders to hurt the local interests like in the case of rulers from Andhra region.

Meanwhile, the Congress is facing an identity crisis as the war between the BJP and the TRS gets shriller. The grand old party which had ruled the region for the longest time and was instrumental in bifurcating the state is struggling to be stay visible and relevant, even with some token protests and symbolic gestures aimed at both, the BJP and the TRS.