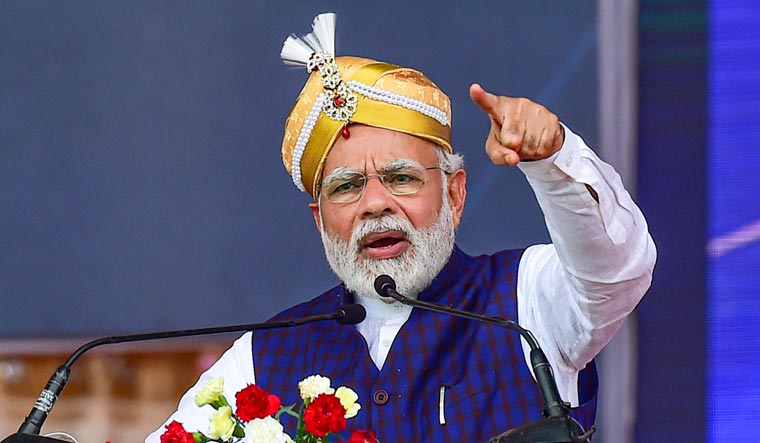 Bengaluru is a reflection of the spirit of “Ek Bharat, Shresht Bharat” as it has become a “city of dreams” for lakhs of Indian youth, said Prime Minister Narendra Modi. “The development of Bengaluru is development of a million dreams. For the last eight years, the Centre has made a concerted effort to enhance the capacity of Bengaluru to reduce the travel time and logistics cost. The double-engine government has been working hard to free the city of traffic jam by focusing on every possible modalities like rail, road, metro, underpass and flyovers. We are committed to build better connectivity to suburban areas,” he said, addressing a huge gathering in Bengaluru on Monday.

Modi is on a two-day visit to Karnataka to inaugurate and lay foundation for 19 projects worth Rs 33,000 crore, including Bengaluru Suburban Rail project, redevelopment of Bengaluru Cantonment and Yeshwantpur stations, five National Highway projects and Multi modal logistic park, doubling of Yelahanka-Penukonda and Arsikere-Tumakuru tracks, dedication of Sir M Visvesvaraya railway terminal, and 100 per cent electrification of Konkan Railway.

Taking a dig at the previous governments, Modi alleged that the suburban rail project had been in discussion for the last 40 years. “Forty years have been wasted in mere discussion. You will be surprised to know that this project, for 16 years, remained shut in a file. If only this project had taken off 40 years back, Bengaluru would not have been under so much pressure today. It would have emerged much stronger perhaps. I assure you that I will work hard to fulfil this dream in the next 40 months. I am happy that our double-engine sarkar is striving to help the people of Karnataka and Bengaluru to realise their dream,” said Modi, adding that the project would reduce the need to live within the city.

“If the satellite townships, suburban and rural areas are connected through rapid transport system, it will have a multiplier effect and also reduce congestion in Bengaluru. The development of national and state highways will help avoid outbound vehicles passing through the city. The widening of the highways and better connectivity will boost economic activity and tourism too,” he said.

“This city has shown what encouragement to entrepreneurship, innovation, youth and private sector can achieve. During the pandemic, the Bengaluru youth showed the way to manage the pandemic. It goes to show that if the government provides resources without interfering in people’ lives, our youth can achieve almost anything and help the country scale greater heights,” said Modi.

Reiterating that Bengaluru was a city of dreams, where entrepreneurship, innovation, public and private sector co-exist, Modi said the city also gave an important lesson to people to change their mindset that degraded private sector and enterprise.

“The 21st century India belongs to wealth creators, job creators and innovators. This is the strength of our country which is one of the youngest nations of the world and there is a need to mainstream and highlight our efforts in promoting this core strength. Bengaluru lives this culture and it is my responsibility to highlight it,” said the prime minister, adding that the Micro, Small and Medium enterprises (MSME) sector, which is fuelling the economy of the tier-2 and tier-3 cities, was the largest employer in India after agriculture.

“Earlier, there was a tendency to keep the MSMEs small in scale. We changed the narrative as we wanted them to grow and create more employment. With the government encouraging global tenders, the MSMEs had limited scope to grow. So, we ended Foreign Direct Investment in government projects costing less than Rs 200 crore and also ruled that 50 per cent of all government procurement should be made from MSMEs. The e-Market platform allows MSMEs to directly trade with government entities and today, 45 lakh MSME traders are benefiting from this initiative,” said Modi.

Hailing India’s startup ecosystem, Modi said Bengaluru was a big hub. “Compared to the past decades, the last eight years have seen at least a 100 billion dollar companies crop up. The unicorns’ valuation in the same period is nearly Rs 12 lakh crore. The startup ecosystem is growing at a fast pace. After 2014, it took 800 days to reach 10,000 startups. But it took only 200 days for the next 10,000 startups to be set up. Today, we have crossed 70,000 startup companies. The road to building a startup is not of comfort and ease. It was not easy to build this ecosystem as it needed tough reforms. But it is reforms that take you towards a new goal. We have broken the monopoly of the government by opening up space and defence sectors. Today, the youth are encouraged to make drones and aircraft. We are urging our youth to test their ideas and vision and compete with government entities like ISRO and DRDO which are our pride. We can compete with the world only when we have a level playing field for all within the country. This will also fuel ‘Atma Nirbhar Bharat’,” said Modi.

Earlier in the day, Modi inaugurated the Centre for Brain Research (CBR) at Indian Institute of Science (IISC). In fact, Modi had laid the foundation stone for the project costing Rs 280 crore in February 2015. The Centre is carrying out research in rural Karnataka to provide evidence-based public health interventions to delay the onset of dementia and slow down its progress, too. The prime minister also laid the foundation stone for a 832-bed not-for-profit Bagchi-Parthasarathy hospital for clinical research in the IISC campus, followed by inauguration of the new campus of Babasaheb Dr B.R. Ambedkar School of Economics University (BASE) and dedication of 150 ITIs upgraded as technology hubs.