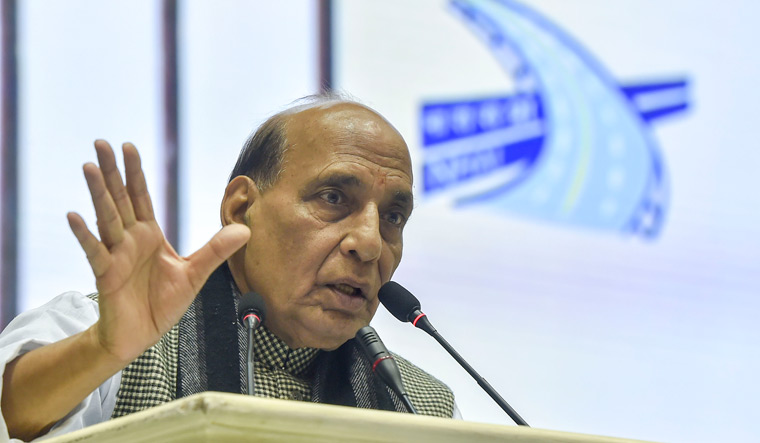 There is a foreign conspiracy behind the recent communal tension and target killings by terrorists in Jammu and Kashmir, Defence Minister Rajnath Singh said on Friday, asserting that the central government will not allow another forced migration of any community from any part of the Union territory.

He said Pakistan-occupied Kashmir (PoK) along with Gilgit-Baltistan are illegally under the occupation of Pakistan which surprisingly is making a claim on the land despite knowing the fact that it was part of the empire of Maharaja Gulab Singh, the founder of Dogra rule.

“There are some forces in Jammu and Kashmir who have always tried to harm the social fabric and encouraged radicalisation. Recently, the attempts to fan communal hatred increased...the communal tension in Bhaderwah town (Doda district) is against our culture,” the minister said addressing a function to celebrate 200th year of coronation of Maharaja Gulab Singh in Jammu.

Singh, who reached Jammu on the second-leg of his two-day tour of Jammu and Kashmir, said no country can progress if its population is divided in communities.

“In Jammu and Kashmir, our neighbouring country is playing an important role in sowing the seeds of hatred. From 1947-48 tribal raids, till the recent targeted killings (by terrorists in Kashmir), there is a foreign conspiracy behind this,” he said.

Without naming Pakistan, the defence minister said the neighbouring country is not happy with India marching ahead despite various challenges.

“We have to thwart this conspiracy and the people of Jammu and Kashmir need to build their future with their own hands,” he said.

“Our government has taken the pledge of resolving the Jammu and Kashmir problem when it first came to power in 2014 when I was the home minister. The work is going on at a fast speed under the new home minister (Amit Shah).”

Stating that the twin Union territories of Jammu and Kashmir and Ladakh have a major role in new India, he said the BJP-led government took a number of steps for the welfare of the displaced people, whether they are West Pakistani refugees, Pakistan-occupied Jammu and Kashmir (PoJK) residents or Chamb migrants.

There was no honest move to resettle 5,674 refugee families of West Pakistan but our government provided them Rs 5.5 lakh per family for their one-time settlement and similarly.

The package was extended to PoJK displaced persons and Chamb refugees who were also provided Rs 5.5 lakh per family. A package of Rs 2,000 crore was given to Kashmiri migrant pandits to create transit accommodations and jobs for them besides increasing their monthly relief, he said.

Paying rich tributes to Maharaja Gulab Singh and other Dogra rulers who extended the boundaries of Jammu and Kashmir, he said they have a dream after making Jammu and Kashmir part of India and therefore every section of the society had to come forward and take a pledge to fulfill their dream which will be a great tribute to them.