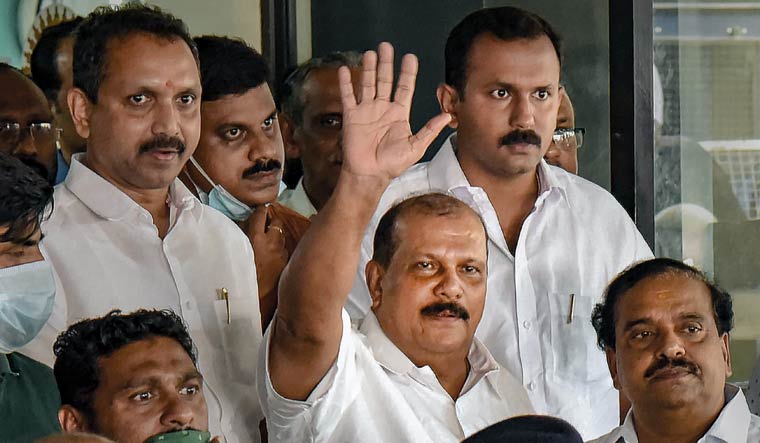 Janapaksham leader P.C. George, who was arrested by the police following cancellation of his bail granted in connection with a hate speech case, was sent to judicial remand by a court in Thiruvananthapuram on Thursday.

George had surrendered at the Palarivattom Police Station in Ernakulam on Wednesday evening. A team of police officers from Thiruvananthapuram formally arrested him and took him into custody

from the Ernakulam AR camp. George was produced before the court on Thursday morning, which sent him to 14-days judicial remand. He was shifted to a district jail in Thiruvananthapuram.

George's son and leader of Kerala Janapaksham, Shone George, questioned the “haste” shown by the police in producing his father before the court early in the morning and alleged the role of Chief

Minister Pinarayi Vijayan in the act.

The Thiruvananthapuram First Class Judicial Magistrate Court on Wednesday cancelled the bail granted to P.C. George after he was booked for making a communally charged speech at the Hindu Maha Sammelan in Thiruvananthapuram on April 30.

The court also granted the police the power to arrest George and produce him before the court.

The police had arrested George on May 1 after registering a case against him under Indian Penal Code Sections 153A (promoting enmity between different groups on grounds of religion) and 295A (deliberate and malicious acts intended to outrage religious feelings of any class by insulting its religion or religious beliefs).

George was granted bail on the same day after his counsel assured the court that he would abide by the bail conditions. One of the conditions was that he should not utter statements intended to divide society on communal lines, like the ones he made at the Hindu Maha Sammelan. At the Sammelan, George exhorted the largely Hindu audience to refrain from eating in Muslim restaurants as these places used certain drops that could render a Hindu client impotent.

However, ten days after he was let out on bail, George made equally unpleasant remarks against a religious community at a temple function at Vennala, near Palarivattom, in Kochi. “He made this speech with the deliberate and malicious intention of outraging the religious feelings of a class of citizens, which is a clear violation of the bail condition,” the court said in its order. “The accused has misused the concession granted to him by not following the terms agreed while he was released on bail,” it added.

George's counsel argued that bail could be cancelled only in case of supervening situations or events that changed the status quo. The court reasoned that violation of a bail condition was in itself a supervening circumstance.

George's counsel had submitted a transcript of the entire Vennala speech to the court. His argument was that certain portions of the speech were selectively highlighted taking out the context of George's

remarks. However, after reading the transcript, the court found that George had repeated almost all the unverified charges he had made against the Muslim community at the Hindu Maha Sammelan, notably

'love jihad' and excess population. He is also seen to have said that the Muslim community was behind most criminal activities like land mafia, gold smuggling, narcotic, terrorism and hawala business.

The Kerala High Court on May 23 had granted P.C. George anticipatory bail till May 26 in the Vennala hate speech case. Then, too, the court had asked George to desist from making controversial statements. George had approached the High Court arguing that police registered the case against him without listening to the full speech and learning the context.

(This article was first published in onmanorama.)