We feel very insecure in Kashmir, they said 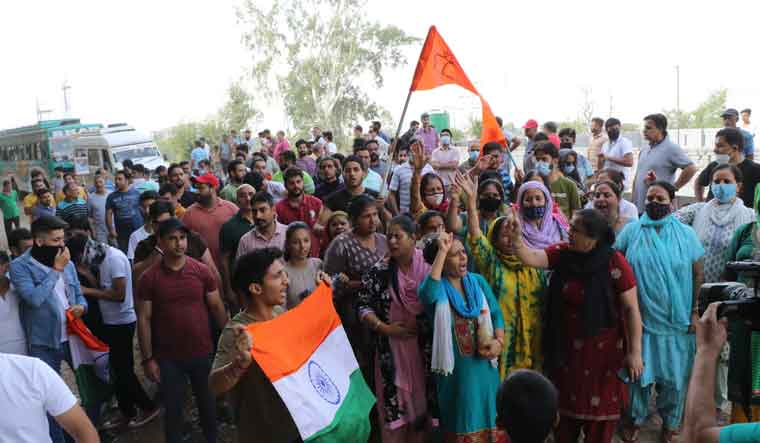 Kashmiri Pandits block the Jammu-Akhnoor National Highway during a protest over the killing of Rahul Bhat, in Jammu | PTI

Migrant Kashmiri Pandits working in Kashmir under Prime Minister Relief and Rehabilitation Package staged a protest in Srinagar on Saturday to press for their demand of posting outside Kashmir in view of the killing of one of their community members Rahul Bhat on May 11 by militants.

Bhat was shot dead in the Tehsil office, Chadoora in Budgam. He was living at Sheikhpura in Budgam, where some migrant Pandit employees working in Kashmir live under security.

The government has constructed similar camps in south Kashmir's Vessu and Haal.

The protesters, male and female, held placards reading “our only demand relocation/deputation of all valley posted migrant employees to any other place in India to stop our bloodshed."

They said they want to tell the government that except relocation outside Kashmir, they will not accept any other decision for their safety. Demanding an end to the targeted killings of members of their community, they said don't feel safe in Kashmir. They said the government was not paying attention towards them. “We feel very insecure in Kashmir after the killing of Rahul Bhat,’’ a protester said. “ The government must understand our concerns.”

Around 6,000 migrant Kashmiri Pandits are working in Kashmir under the Relief and Rehabilitation Scheme. The killing of Bhat evoked condemnation from political leaders and civil society members in Kashmir. The incident has put the government in a spot. It has also deflated the claims of restoring peace in Kashmir after the repeal of Article 370. The killing of Bhat is a setback to the government's efforts to encourage migrant Kashmiri Pandits to return.