Amit Shah is a 'Badshah of lies', says KTR 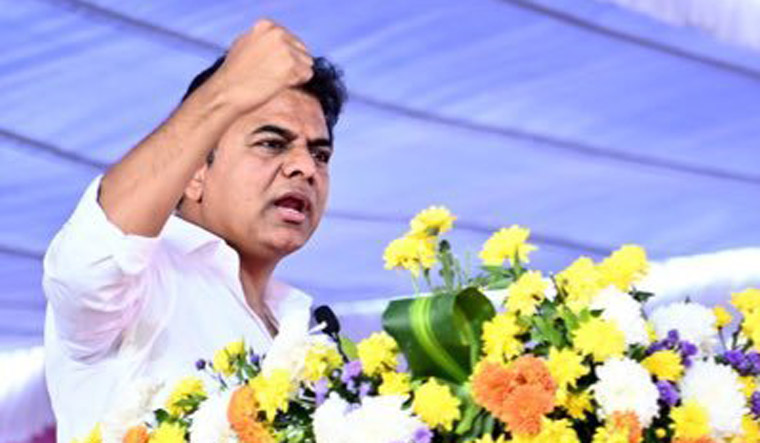 Rama Rao, son of Telangana Chief Minister K Chandrasekhar Rao and popularly known as KTR, alleged that the steering of the NDA government at the Centre had gone into the hands of corporates.

Addressing a public meeting here that marked the culmination of Telangana BJP president Bandi Sanjay Kumar's second phase of 'padayatra' (foot march), Amit Shah on Saturday attacked the TRS government in the State for alleged corruption and accused it of failing to fulfil the major planks of separate Telangana agitation of "water, funds and jobs" and said his party is ready to face the polls due in the State next year.

On Shah's charge against the Telangana government led by Chief Minister K Chandrasekhar Rao that he has not seen such a corrupt government in the country, Rama Rao hit back at Shah over instances of "rampant corruption" prevailing in BJP-ruled Karnataka and referred to the allegations of a Karnataka BJP MLA that he was approached by some people, offering the State chief minister's position in exchange for Rs 2,500 crore.

Similarly, the Telangana Minister also referred to the alleged comments of a Lingayat seer in Karnataka that mutts (monasteries) pay a commission of 30 per cent to get the sanctioned grants released for them. Rama Rao also referred to alleged suicide of a contractor in Karnataka, who made allegations against the then BJP Minister over demand of 40 per cent cut in a public work taken up.

Rama Rao told reporters here that Amit Shah should change his name to "Badshah of lies" (emperor of lies).

Shah claims Rs 25,000 crore was given to 'Mission Bhagiratha' scheme. There is an urgent need to change his name. He is not Amit Shah but "Badshah of lies", Rama Rao said.

"Should we not call him "Badshah of lies"? NITI Aayog recommended Rs 19,000 crore as grant for the project, saying that it is a good project. Has your government given 19 paise? Have any shame to speak blatant lies? People are not ready to believe your talk...Such "nonsensical" talk won't be tolerated," Rama Rao said.

Saying that TRS has demanded Amit Shah to speak on contribution of the Centre to Telangana's development, Rama Rao alleged that Shah spoke about Nizam and Razakars without saying anything useful for Telangana and again sought to know what the BJP-led NDA government at the Centre did to Telangana in the last eight years.

Telangana paid Rs 3.65 lakh crore as taxes to the Centre but it got only Rs 1.68 lakh crore in return, he said.

Reacting to Shah's comments on loans taken by Telangana government, Rama Rao accused the BJP of pushing India into a debt trap and said Rs 100 lakh crore loans were borrowed by NDA government in the last eight years.

On Shah's statement that BJP is ready to face polls, if TRS government dissolves the Assembly, Rama Rao said the TRS is also ready for elections if the BJP dissolves Parliament.

The people are ready to reject the "double-engine" government and (Prime Minister Narendra Modi) Modi, Rama Rao claimed, even as he recalled Chief Minister KCR's (as Telangana Chief Minister K Chandrasekhar Rao is also known) statement that the elections would be held on time in Telangana (in 2023).

On Shah talking about abolishing minority reservations in Telangana, Rama Rao claimed that quota for Muslims already exists in Kerala and BJP-ruled Karnataka and Bihar. If it can be given in those states why not in Telangana, he asked.

On Shah's charge that the steering of TRS poll symbol of car is in the hands of AIMIM leader Asaduddin Owaisi, Rama Rao said, "Our steering is in our hands but yours (NDA government) is in corporate hands. 'Hum do, hamare do'...everybody knows who's driving...two Gujaratis selling, two buying. Everybody knows why you impose condition on importing coal, why you sell airports".

"But you are able to play games using Central agencies and hunting others. Targeting opponents through Central agencies. But that doesn't run for long, remember Amit Shah ji, because this is democracy. You can't survive on lies for long," Rama Rao said.

Shah created a record of being a Home Minister who spoke the highest number of lies, they alleged.