Rajnath Singh will launch 'Surat' and 'Udaygiri' in Mumbai 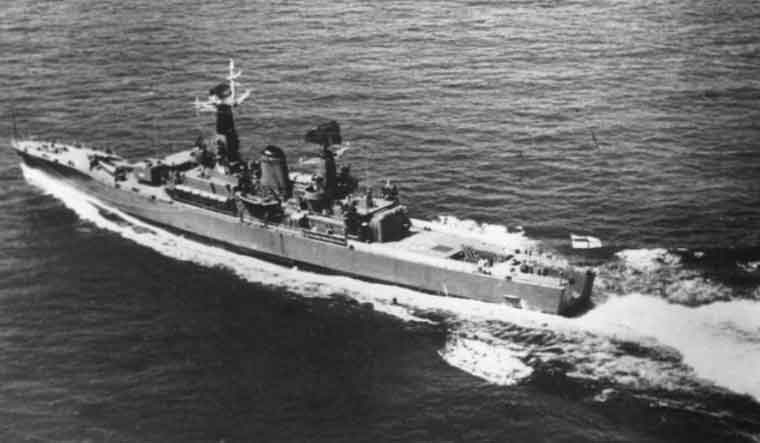 The new Udaygiri is the reincarnation of erstwhile ‘Udaygiri’ (shown in pic), the Leander Class ASW Frigate, which served the country for three decades | ANI Twitter

In a big boost to Indian naval power, two new frontline warships—a frigate and a destroyer—will be launched next week.

Naval ship Surat, a destroyer, and Udaygiri, a frigate, will be launched concurrently at Mumbai-based Mazgaon Docks Limited, in presence of Defence Minister Rajnath Singh on May 17.

As India looks to counter growing Chinese influence, it focuses also on its naval power. The Navy has 130 ships and submarines, with 39 more vessels under construction, besides the two frigates being built for the Navy in Russia.

On the contrary, the Chinese navy has a battle force of around 355 ships and submarines, including more than 145 major surface vessels. By 2030, it is expected to operate around six aircraft carriers, according to a report prepared by the Pentagon. While China has been inducing 12-13 ships every year, India has only commissioned 2-3 ships annually, on an average.

Budgetary constraints have downsized the Indian Navy's expansion plans, from a target of becoming a 200-ship force to the present 170-ship force goal now.

According to a naval official, the Project 15B class of ships are the next generation stealth guided-missile destroyers being built at the Mazgaon Docks Ltd. And 'Surat' is the fourth ship of the project which heralds a significant makeover of the P15A (Kolkata Class) destroyers with an overall budget of Rs 35,000 crore. It is named after the commercial capital of Gujarat and also the second-largest commercial hub of western India after Mumbai. Surat city has a rich maritime and shipbuilding history and vessels built in the city in the 16th and 18th centuries were known for their longevity (of more than 100 years).

"The ship Surat has been built using the block construction methodology which involved hull construction at two different geographical locations and has been joined together at MDL, Mumbai. The first ship of this class was commissioned in 2021. The second and third ships have been launched and are at different stages of outfitting/ trials," said a naval official.

The second is the frigate, Udaygiri. The warship is named after a mountain range of Andhra Pradesh and is the third ship of Project 17A Frigates. These follow up on of the P17 Frigates (Shivalik Class) with improved stealth features, advanced weapons and sensors and platform management systems. Naval officials claim that Udaygiri is the reincarnation of erstwhile ‘Udaygiri’, the Leander Class ASW Frigate, which saw numerous challenging operations in its illustrious service to the country spanning over three decades from February 18, 1976, to August 24, 2007.

Under the P17A program, a total of seven ships, with four at MDL and three at Kolkata-based Garden Reach Shipbuilders & Engineers Ltd (GRSE) are under construction with an estimated cost of Rs 45,000 crore.

The Naval official maintained that various novel concepts and technologies like Integrated Construction, Mega Block Outsourcing, Project Data Management Project Lifecycle Management (PDM/PLM) have been adopted for the first time in indigenous Warship Design and Construction in this project. It may be recalled that the first two ships of the P17A Project, were launched in 2019 and 2020 at MDL and GRSE respectively.

Both 15B and P17A ships have been designed in-house by the Directorate of Naval Design (DND). During the building phase at the shipyard, around 75 per cent of the orders for equipment and systems have been placed on indigenous firms including MSMEs.

Apart from vessels under construction, ‘Acceptance of Necessity' has also been accorded by the ministry of defence for another 43 ships and six Project 75 (India) submarines to be built in India.