The Royal Gold Medal is approved personally by Queen Elizabeth 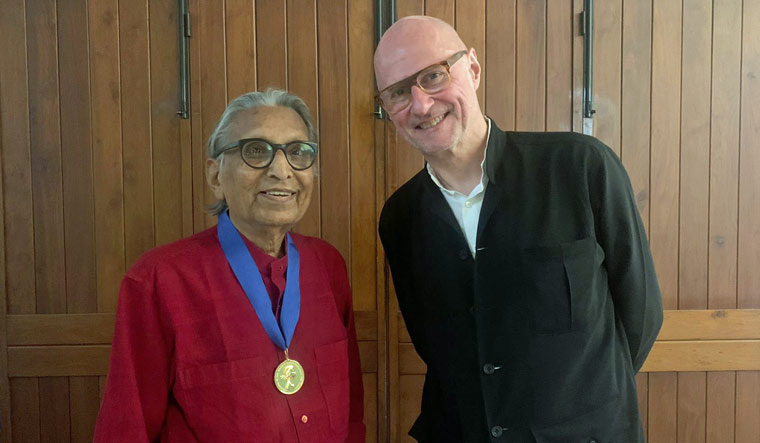 Noted architect Balkrishna Doshi was on Tuesday conferred with the Royal Gold Medal 2022, one of the world’s highest honours for architecture.

Doshi, 94, is the only Indian among those who have been awarded both the Royal Gold Medal and the Pritzker Architecture Prize, often referred to as the Nobel Prize in Architecture.

The 2022 Honours Committee that selected the Royal Gold Medallist was chaired by The Royal Institute of British Architects president Simon Allford and other distinguished people from the field.

Given to a person in recognition for their life’s work, the Royal Gold Medal is approved personally by Queen Elizabeth. It is given to people who have had a significant influence on the advancement of architecture.

It is for the first time that the medal has been given to a person at the place of their residence. Ahmedabad-based Doshi was given the medal in the city as he could not go to London.

Allford remarked that Doshi has influenced generations of architects through his delightfully purposeful architecture. “Influenced by his time spent in the office of Le Corbusier, his work nevertheless is that of original and independent thinking. His outstanding contribution to the art of architecture, the craft of construction and the practice of urban design establish him as a most deserving recipient of this award,” he said.

Some of his key projects include Shreyas Comprehensive School Campus in Ahmedabad, the Institute of Indology, Ahmedabad, the Ahmedabad School of Architecture, which was renamed as CEPT University; Kanoria Centre for Arts in Ahmedabad, Amdavad ni Gufa and the Aranya Low Cost Housing project in Indore.

“It is very prestigious. My guru Corbusier got this medal and he showed it to me. I am honoured,” Doshi said. Asked if he had aspired to get this medal, Padma Bhushan awardee Doshi said that he just aspired to do good work and the gold medal came by.

Replying to the question of what today’s architects should keep in mind while designing structures, Doshi said unfortunately we look at architecture as a building and a client as a customer, who is using spaces. “We never look at it as a place whether they will live together. We make rooms. We need to make living spaces, gathering spaces where people interact with the society,” he said.

He said the Indore project is closest to his heart and said that he built it and then people changed it. “Go and see the way people are living there,” he said.

Architecture, to him, happened by instinct. Brought up in Pune in the joint family home of his grandfather, Doshi always saw the house growing due to numerous additions in the family. He was fascinated by the community and the cultural lives and, the impact it has on the buildings. “I often go to the pols (by-lanes) of Ahmedabad,” he said.