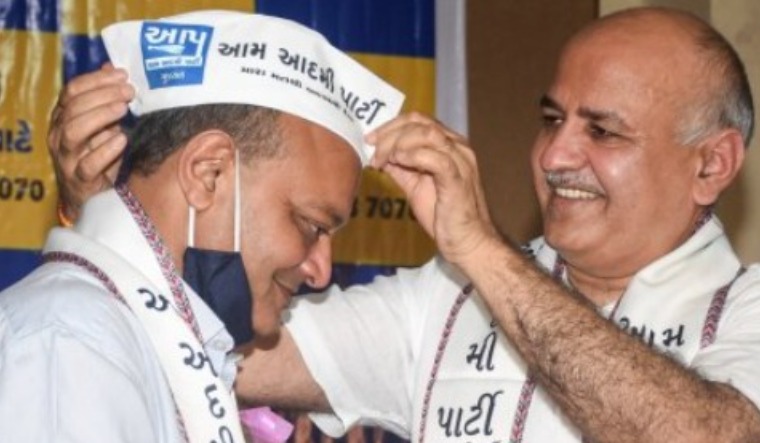 Ruining all hopes of Aam Aadmi Party (AAP) becoming an alternative to both the BJP and the Congress in Gujarat, Patidar leader Mahesh Savani resigned from the party, saying he does not want to associate with any political party.

Assembly polls are due in Gujarat by end-2022.

Savani, a 52-year-old Surat-based businessman and philanthropist, said he quit as he was unable to focus on his business and social service activities due to his political commitments.

Savani, who is into diamond and real estate businesses, is known for adopting orphan girls of all faiths and arranging their lavish mass weddings.

“I had joined the AAP thinking that it would help me in expanding my social activities. But, it actually proved counter productive as I was not able to focus on my business or social activities due to political commitments. Even my family and well-wishers told me that politics is not my cup of tea and requested me to leave it,” Savani told reporters in Surat.

“As of now, I will stay away from politics. I have not thought of joining any other party as of now. I will join a party which believes in serving the people. The BJP is in power. But, I am not ambitious about having any post or becoming a minister. I will remain attached to social service,” he said.

Savani who led an indefinite fast for five days had collapsed during the fast and had to be hospitalised in December 2021. The fast was in support of 93 AAP members, including 10 students, who were sent to Sabarmati Central Prison for protesting outside the BJP headquarters in Ahmedabad against the question paper leak in government recruitment examinations.

Meanwhile, Vijay Suvada, a popular folk singer too resigned from the AAP membership on Sunday. He joined the ruling BJP in the presence of its state unit chief CR Paatil in Gandhinagar a day later, saying he has “returned home”.

Suvada said he needs a party with strong organisation like the BJP to serve the people well.

“I have returned home. My family has been BJP supporters for three generations. CR Paatil considers me as his son. I need a strong organisation to serve the people in a better way. And, everyone knows that BJP has the best party organisation on the ground,” Suvada said.

Both Suvada and Savani had joined Arvind Kejriwal’s party in June last year. Manish Sisodia, the Deputy Chief Minister of Delhi had come to Surat to induct Savani in AAP.