No end to stalemate in Parliament, as opposition rejects govt invitation to leaders of 4 parties 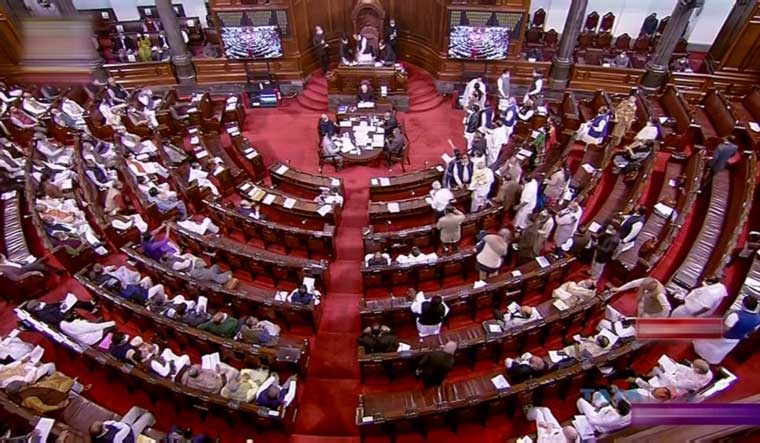 The logjam in Rajya Sabha looks to continue as the opposition has rejected a Central outreach to discuss the suspension of 12 MPs. According to multiple media reports, leaders of opposition said they will not attend the Monday morning meeting convened by Leader of the House Piyush Goyal, as invitations were sent to leaders of the four parties—Congress, TMC, Shiv Sena, CPI(M)—whose MPs have been suspended and not to the entire opposition. Responding to a letter from Parliamentary Affairs Minister Pralhad Joshi inviting the four parties, Leader of Opposition in Rajya Sabha Mallikarjun Kharge said "select invitations were unfortunate".

The proceedings of the House have been repeatedly disrupted since the start of the winter session following the suspension of the 12 opposition MPs from the Rajya Sabha on November 29. The 12 opposition members have been suspended for the entire winter session of parliament for their "unruly" conduct in the previous session in August. The opposition has described the suspension as "undemocratic and in violation of all the Rules of Procedure" of the Upper House.

TMC leader Derek O'Brien tweeted, "Monday morning STUNT from a government who do not want Parliament to function. Government calls leaders of the four Opposition parties whose 12 RS MPs have been arbitrarily suspended."

A similar letter has also been sent to Joshi by CPI(M) MP Elamaram Kareem. "It is quite unfortunate that the government has delayed such talks with the opposition even after three weeks of the suspension. Even now the action of the government is not sincere as the meeting is meant for only the floor leaders of the suspended MPs' parties," he said in the letter. "You are well aware that the entire opposition has been taking a unified stand on this suspension issue and all the opposition parties together requested the Chairman and government to hold such a meeting to resolve the stalemate from day one."