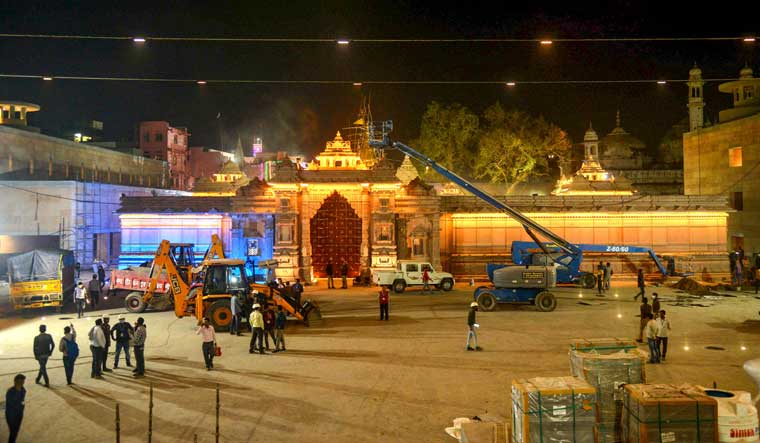 Bharatiya Janata Party has decided to turn the inauguration of Kashi Vishwanath corridor in Varanasi into an event of cultural renaissance. The party will organise a series of events to mark the occasion, with Prime Minister Narendra Modi unveiling the redevelopment and beautification of Kashi Vishwanath Dham, on December 13. The events will continue till January 14.

The event is taking place ahead of the crucial Uttar Pradesh elections, and the ruling party is banking heavily on Hindutva sentiment as an election strategy. While the construction of Ram Temple will take some more years, redevelopment of Kashi will be an important milestone before the polls.

“On December 13, events will be held in all ‘Jyotirlings’ across the country, while giant LED screens will be put up at 51,000 spots across the country where the live telecast of the grand ‘Divya Kashi - Bhavya Kashi’ programme will be done,” BJP general secretary Tarun Chugh said.

“LED screens will also be put in all important temples, ashrams and religious organisations so that religious gurus, priests, intellectuals, other prominent personalities and BJP representatives and workers and people from all walks of life can attend,” he said.

Arrangements are also being made to live telecast the ceremony in all villages. The BJP is also campaigning to ensure that people in every household in Uttar Pradesh light diyas to mark inauguration of the Kashi Vishwanath Dham. “The BJP will also organise ‘deepotsav’ in every city, town and village and people will pray to Lord Shiva for the nation’s growth, development, progress and prosperity. It will also be an occasion for the people to witness the grandeur of our ancient religion and tradition,” the BJP leader said.

A number of events and programmes are also being organised in Kashi to mark the ‘Divya Kashi - Bhavya Kashi’ programme, including laser shows and special lighting of all temples, ashrams and important crossroads and roads in Kashi. All boats on the river Ganga will also be adorned with special lights. The Uttar Pradesh government has made special arrangements to ensure uninterrupted electricity supply in Kashi.

All the BJP units have been asked to hold programmes at the district headquarters involving temples, religious places. A publication on ‘Divya Kashi - Bhavya Kashi’ will also be distributed at the programmes and events. The BJP will also felicitate religious gurus, spiritual leaders and priests on the day, Chugh said.

In the run up to the December 13 event, the BJP will take out 'prabhat pheri' (hymn processions) on December 8 and 9. “The BJP workers will take out ‘prabhat pheri’ on ‘Divya Kashi - Bhavya Kashi’ in all the districts across the country. On December 10, 11 and 12, a cleanliness drive will be organised in all the temples, ashrams and religious places across the country where all elected representatives of the BJP, MLAs, MPs, ministers, chief ministers and deputy chief ministers will take part. A booklet on ‘Divya Kashi - Bhavya Kashi’ and prasad will also be distributed in five lakh homes,” Chugh said.

On December 17, the Union Urban Development Ministry and Uttar Pradesh Urban Development Department will organise a conference of mayors in Kashi. On December 23, a seminar to promote natural and organic agriculture will be held where Modi will share his vision. The saffron party will use the occasion to reach out to farmers across the country to talk about various “pro-farmers government policies”.

On January 12 next year, to mark the birth anniversary of Swami Vivekanand, a youth conference will be organised in Kashi.