'How do we bear this pain': Foster parents of Anupama’s child distraught 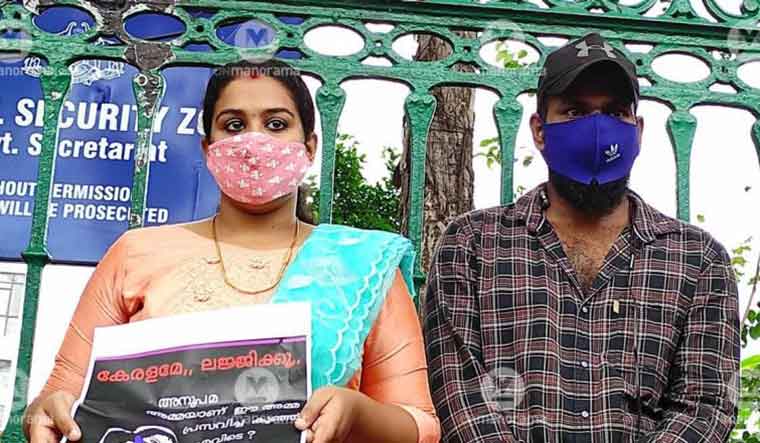 Tuesday evening marked the end of the relationship between Anupama’s child and his foster parents. The couple, who live in Prakasam district of Andhra Pradesh, got the heartbreaking news of the positive DNA result, which confirmed that Anupama Chandran and her husband Ajith were the child's biological parents.

“How do I bear this pain? They have played with the emotions of a mother,” said the woman in her 40’s, who is a lecturer in a private college.

The couple blamed the authorities in Kerala for giving them baby despite knowing that the child’s mother was on a protest.

“We learnt that his mother was on agitation since April. We went to Kerala in August to get the baby. Their biggest mistake was that they never told us anything. They should have just given us another baby. Now we are being punished for no fault of ours,” she said.

Her husband, who, too, is a lecturer, said, “He is a very intelligent boy. He was very much attached to my wife. When we brought him home, he stuck to her and refused to leave her side. He was our life.”

The couple said the child was so attached to them that he refused to go with the authorities and wept a lot.

“Can only biological mothers give love and care to a child. Can't foster mothers do the same?”

The couple said they haven’t slept properly since they got to know about the issue.

“We request only one thing. Please give us another baby as soon as possible so that we feel a little better. We cannot feel lonely for a long time and miss the child,” said the woman.

The childless couple had waited for four years for their turn to adopt a child. As per rules, they chose three states - Andhra Pradesh, Telangana and Kerala - to adopt a baby. A long waiting list in the first two states made them settle for Kerala.

A child welfare official, who was closely involved in the counselling of the foster parents, said that the couple are “mentally distressed”. The officials said that the husband and wife are more distraught because they feel the media attention has demonised them.

Principal Secretary of Women and Child Welfare Department A.R. Anuradha said that the couple will be treated as a special case and will get priority in the allotment of children for adoption.

Meanwhile, DNA tests on the baby and the couple were conducted at the Rajiv Gandhi Centre for Biotechnology (RGCB) yesterday.

After being informed about the test result, the couple went to the Nirmala Sishu Bhavan in Thiruvananthapuram under the Child Welfare Committee (CWC) to see the baby whom Anupama had last seen when he was just three days old.

When she came out of the child care home, Anupama told reporters that she was happy her baby had been brought back, but it was difficult for her to leave him there now after seeing him.

On November 18, the CWC issued an order directing the Kerala State Council for Child Welfare (KSCCW) to bring the child back to Kerala.

A team, led by KSCCW officials and comprising an escort of a Special Juvenile Police unit, received the child from the adoptive parents on Saturday and brought him back to Kerala. The team reached the Thiruvananthapuram airport on Sunday night.

Anupama (24) and Ajith have been protesting in front of the KSCCW office at Thycaud for some days, demanding to get the baby back.

The woman's allegation that her child was forcibly taken away from her by her father, a local CPI(M) leader, triggered a political controversy and the government had announced a departmental probe into the incident.

Anupama had accused her parents of forcibly taking away her newborn child from her soon after its birth a year ago and alleged that though she had complained about it to the police several times since April, they were reluctant to register a case against her family members.

However, the Peroorkkada police has said a case was registered against six people - her parents, sister, sister's husband and two of his father's friends - and that the delay happened as they were awaiting legal opinion.

A family court last month stayed the adoption process of the child and directed the police to submit a detailed report on the matter in a sealed cover.