Why Tushar Gandhi has gone to court against Sabarmati Ashram redevelopment

The PIL is likely to come up for hearing after Diwali 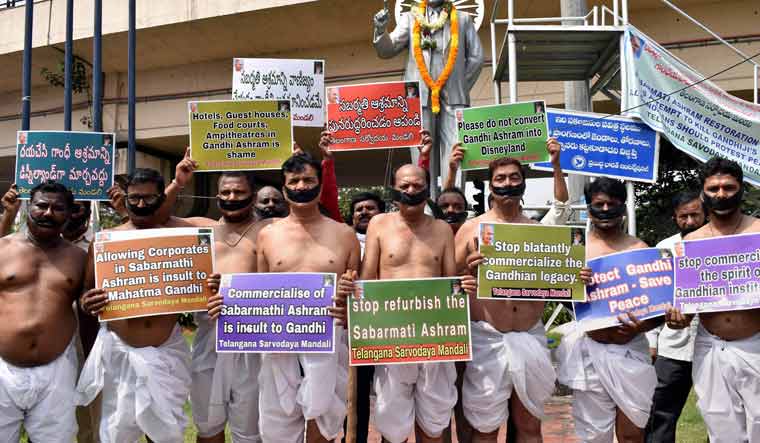 Gandhians in Hyderabad protest against redevelopment of Sabarmati Ashram | PTI

Opposition against the government’s plans to redevelop Gandhi Ashram, founded by Mahatma Gandhi, seems to be growing stronger.

In a public interest litigation filed recently at the Gujarat High Court, Tushar has taken exception to the redevelopment plan for the Gandhi Ashram made by the government authorities.

Situated on the banks of river Sabarmati in Ahmedabad, the ashram is also popularly known as the Sabarmati Ashram.

Recently, a group of Gandhians and organisations following Gandhian ideology completed a yatra from Sevagram to Sabarmati. They rejected, outright, the formation of a trust that is to oversee the redevelopment.

The redevelopment plan that is to cost Rs 1,200 crore has been designed by HCP Design, Planning and Management Pvt. Limited, headed by architect Bimal Patel. The same firm has designed the Central Vista project.

The PIL has been filed through Bhushan Oza, and leading lawyer Mihir Desai is to appear on behalf of Tushar.

He has sought that the Gujarat High Court direct that any redevelopment work should be planned and executed by the trusts under the umbrella of National Gandhi Smarak Nidhi. This was formed after the assassination of Mahatma Gandhi to preserve his legacy.

Tushar has also sought that a government resolution of March 5—issued by the industries and mines department on setting up of a governing council and executive council comprising government functionaries—be cancelled.

The PIL is likely to come up for hearing after Diwali.

He has pointed out that the manner and method in which redevelopment has been planned, it was not only “diametrically opposed to personal wishes and bequeathal of Mahatma Gandhi”, but it would also alter the management structure of the ashram.

He has further stated that if the High Court does not intervene, the complex would be ruined and would be turned into a commercial entertainment complex.

Tushar emphasised he has no issues with the government continuing to fund Gandhian institutions.

In a video clip released about 10 days ago, the office of Gujarat Chief Minister Bhupendra Patel had maintained that the ethos and simplicity of the ashram will be preserved.

Tushar told THE WEEK that it is in the constitution of National Gandhi Smarak Nidhi that the ashrams and institutions for eternity will be insulated from government and political interference and influence. “It is about saying to the government that you are not welcome,” he said, adding that if the government wants to give funds, then they are most welcome but not as executive authority. “Look what have they done to Jallianwala Bagh,” he pointed out.

Tushar alleged the government has made contradictory statements from time to time. First, they said they would make the Sabarmati Ashram a grand tourist destination. Then they spoke about restoring it to what it was in 1947. They also spoke about having parking facilities and food malls, he said. Going by the plan, even the 'Sanghralaya' will be gone as it was set up after 1947.

Tushar said that if the judicial system does not give justice, then all hopes are lost. “I haven’t lost hope,” he said, adding that he is an optimist. “If the cause is true, it will be met with honesty and integrity,” he said.