Sasikala’s comeback could shake existing power equations in the AIADMK 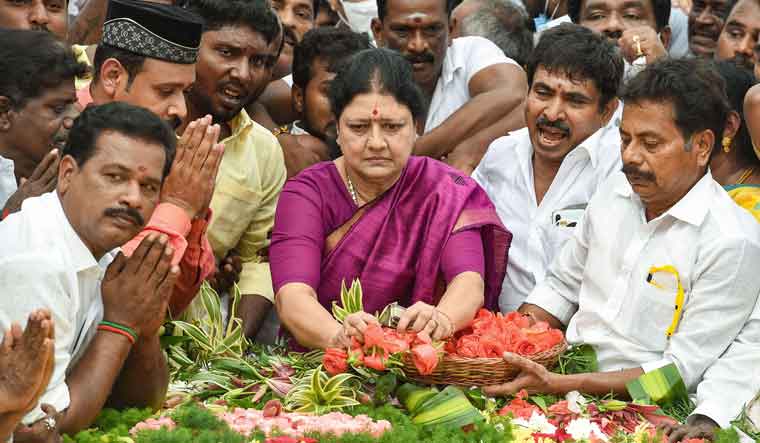 A teary-eyed Sasikala visited Jayalalithaa’s memorial for the first time in four years on Saturday and paid floral tributes. Sasikala, who chose to remain silent and step aside from active politics during the elections, has decided to make a comeback after the debacle of the AIADMK in the recently concluded local body polls.

“I believe MGR and Jayalalithaa will save the party. With that belief, I start my journey from here,” she told media, sending out a clear message that she is embarking on an active political journey to reclaim her position and revive the AIADMK which lost two consecutive elections in the last five months.

As Sasikala set out from her T. Nagar residence on Saturday morning, her supporters welcomed her. With the AIADMK party flag on her car, Sasikala reached the beachside memorial amid chants of ‘Thyaga thalaivi chinnamma' and ‘Puratchi Thai chinnamma’. Sasikala broke down several times as she stood in front of the memorial and offered prayers. In her exclusive interview with The Week earlier, she had talked about her closeness to Jayalalithaa.

In February 2017, before she walked into the Parappana Agrahara prison in Bengaluru, Sasikala visited the memorial and took a vow to retrieve the party. And now with the leadership crisis in the party at its peak, Sasikala and her supporters believe that her comeback can once again lead the party to a victory. “We have lost three elections since 2019. Amma gave us 39 MPs. Now we have only one. The local body polls tell where we are. Chinnamma can only save the party now,” said G. Arunkumar, an AIADMK cadre from Perambalur, who came to the Jayalalithaa memorial to catch a glimpse of Sasikala. “Many ask me why I took so much time to visit the memorial. But everyone obviously knows why I took so much time to visit the memorial,” she said, hinting that she stepped aside earlier only to help AIADMK win the elections.

“MGR and Jayalalithaa always worked for the welfare of the people. I have never been without Jayalalithaa. Jayalalithaa and MGR will definitely save the cadres and the party,” she said.

Sasikala’s comeback could shake the existing power equations in the AIADMK, which is turning 50 on Sunday.