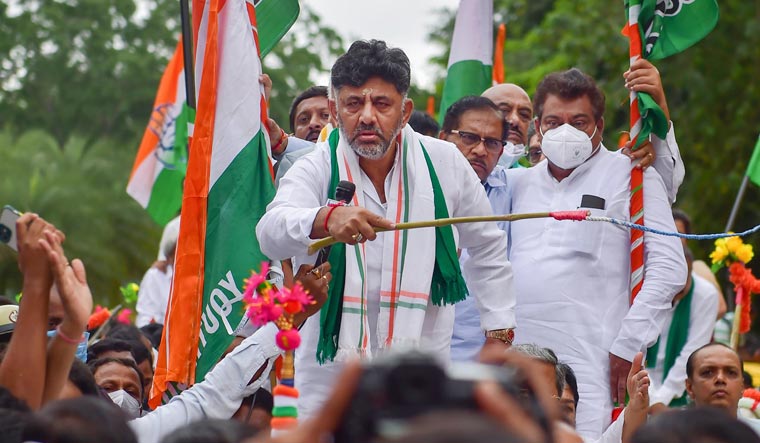 The Karnataka Congress has expelled its media coordinator M.A. Saleem from the party for six years after a video of his private conversation with senior Congress leader V.S. Ugrappa, where the duo is heard making serious allegations against KPCC chief D.K. Shivakumar, went viral. However, Shivakumar chose to distance himself from the controversy.

"It was a private conversation between two of my party leaders during the press meet. But I am in no way concerned with it, neither is the Congress party as it was not an official press statement. The party's disciplinary committee headed by Rahman Khan will take appropriate action as per the party's constitution," said Shivakumar, who rushed to the KPCC office on Queen's Road, an hour after Ugrappa had held a press meet to clarify his point.

Earlier, Ugrappa convened another press meet to issue a clarification and tried to shift the blame on the media for "glorifying" a private conversation and contended that Saleem had only narrated how some BJP men were talking ill about the state Congress president.

"Saleem was only referring to the Rs 18,500 crore irrigation scam and the recent IT raids on the contractors. He said the BJP men were making allegations against our party chief. But the media has misreported it," claimed Ugrappa, who was chastised by the reporters for twisting the facts.

Ugrappa, a lawyer, not only praised Shivakumar as a "good administrator" and a "committed leader" of the Congress party but also claimed that he had advised Saleem against making such allegations against the party chief after the press meet.

Interestingly, Shivakumar told the reportes that he had no reason to blame the media. "You show what we politicians speak. I have also seen the video of my party leaders making the private conversation. In politics, people throw both brickbats and bouquets at you and you should accept everything as it is part of public life," said Shivakumar, who categorically denied the allegations of corruption.

"I am not involved in any percentage (commission) business and there is no need for me to do it. The home minister is free to order a suo moto inquiry into the alleged scam," Shivakumar said, while also citing instances when BJP leaders had had private conversations about the corruption in the BJP. He made special mention of a conversation between former chief minister B.S. Yediyurappa and late H.N. Ananth Kumar and the alleged "bedroom conversation" of a BJP minister (now former minister) recently.

When asked about Ugrappa's apprehensions over Shivakumar's leadership, he said, "We can't satisfy everyone. As for my performance, the people will judge my performance and vote in the elections."

The state party chief who is caught in a power tussle with former chief minister Siddaramaiah, said, "Our party has no factionalism and we will fight unitedly. People commenting on my body language and my style should know that I come from a village and I have my own style, mannerisms and brand of success. I will not change for anybody's sake."

D.K. Suresh, Bengaluru rural MP and younger brother of Shivakumar, admitted the brothers had many adversaries within the party, too. "We have many close aquaintances and some people are trying to tarnish the image of Shivakumar. We need to understand their intentions," he said.

Meanwhile, the KPCC disciplinary committee headed by veteran leader K. Rahman Khan announced the expulsion of Saleem from the party, while issuing a showcause notice to Ugrappa.

The committee stated that Saleem had indulged in "irresponsible behaviour" during the private conversation and expelled him from the primary membership of the party for six years with immediate effect.

In the showcause notice, it stated that Ugrappa had made several remarks that could dent the image and dignity of the state party chief and also cause immense damage to the party.

"The Congress party strongly refutes the allegations and condemns them as they are baseless," said the notice, which has demanded a reply within three days.