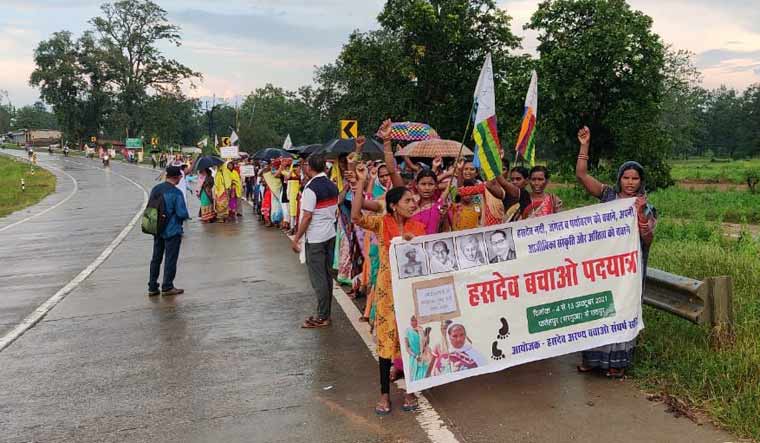 About 350 people from tribal villages in Hasdeo Arand forest area spanning Korba and Sarguja districts of Chhattisgarh are on a 10-day, 330-km long foot march from Sarguja to Raipur to protest against the coal mining projects and the consequent ‘illegal’ land acquisition process in the region.

The residents of around 30 villages started their foot march from Fatehpur in Ambikapur of Sarguja district and are likely to reach the state capital on October 13. They will seek meetings with Governor Anusuiya Uike and Chief Minister Bhupesh Baghel to press their demands.

The villagers have been protesting against the ongoing and proposed coal mining projects in the region that is threatening the forest ecosystems and the people dependent on this ecosystem for their livelihood. Despite protests, six coal blocks have been allocated, and mining is operational on two of these blocks – Parsa East and Kete Basan (PEKB) block and Chotia I and II block.

Another block – Parsa - has received forest and environment clearance. The forest clearance allegedly on the basis of forged gram sabha consent and land acquisition process has commenced without the consent of gram sabhas, said Hasdeo Aranya Bachao Sangharsh Samiti, the joint platform of protesting tribals.

Though the coal blocks are mostly allocated to government-owned companies, the actual mining is done by corporate companies as mine development operators (MDOs), the committee said.

Of the two operational mines, the PEKB is being mined by the Adani group as MDO with Rajasthan Rajya Vidyut Utpadan Nigam Limited (RRVUNL), while the Chotia block is mined by the Bharat Aluminium Company Limited (BALCO) of the Vedanta Group.

The protesters are demanding immediate cancellation of all coal mining projects in Hasdeo Aranya region, withdrawal of all land acquisition proceedings carried under Coal Bearing-Areas Act 1957 without taking prior consent from grama sabhas, cancellation of clearances to Parsa coal block; immediate FIR and action against company and officials for “forged grama sabha consent”, implementation of “free prior informed consent” from grama sabhas before land acquisition and allocation of any mining or other projects in Schedule 5 areas, restoration of the Community Forest Rights (CFR) title of Ghatbarra village which has been illegally cancelled; recognition of all CFR and individual forest rights titles across Hasdeo Arand and implementation of all the provisions of PESA Act 1996.

The local residents had staged a 75-day sit-in in 2019 to press for the above demands, but no cognisance was taken, the committee said. They also said that the ruling Congress seems to have gone back on its promises, made by ex-president Rahul Gandhi, CM Baghel and other senior leaders when in opposition and through its election manifesto, supporting the rights and struggle of grama sabhas, and protecting the region.

What is at stake in Hasdeo Arand?

Alok Shukla of Chhattisgarh Bachao Andolan, who has been associated with protests of locals against coal mining in Hasdeo Arand for almost a decade, told THE WEEK that the foot march reached Ratanpur in Bilaspur on Friday. He said that the issue is not only about illegal land acquisition but also about the entire Hasdeo Arand forest ecosystem.

Known as the “Lungs of Chhattisgarh”, the Hasdeo Arand forests, where the coalfields are, are one of the largest intact dense forest areas in central India, covering 170,000 hectare.

The forests are home to rich biodiversity (over 450 species of flora and fauna) including species like elephant, leopard, sloth bear and others. The area shows significant elephant presence throughout the year and is part of a large migratory corridor.

It is a catchment for Hasdeo (Mahanadi’s largest tributary) – critical for perennial river flow. It is also the watershed of Hasdeo Bango reservoir – critical for irrigation of almost three lakh hectares double-cropped land in the “rice-bowl” state of Chhattisgarh. The forests are Schedule 5 area, home to around 20,000 tribal and forest dwellers.

Shukla further said that the importance and criticality of conservation of Hasdeo Arand has been accepted in government records, yet being ignored to allow coal mining in the region.

The forests were declared an entirely ‘No-Go area’ in 2010 based on a joint study of the ministry of coal and ministry of environment and forests. Such ‘No-Go’ areas are less than 10 per cent of India’s coal-bearing areas deemed as “out of bounds” for mining.

Even after multiple policy revisions, the maximum portion of Hasdeo Arand are still deemed “inviolate”. Yet, new mines are being opened in violation of the policy, Shukla said.

The forests also form a part of the Lemru elephant reserve project for conserving elephants and reducing human- elephant conflict, but successive state governments have failed to notify the reserve and the project boundaries have now been modified to exclude all coal-bearing areas.

Forest Clearance for Parsa East and Kete Basan (PEKB) project was cancelled by NGT in 2014 and currently the mining is operational through a stay order as case is pending in the Supreme Court.

Last year, five coal blocks in the area were withdrawn from auctions by the Union government based on state government intervention – yet, pre-mining activities continue in four other adjacent coal blocks.