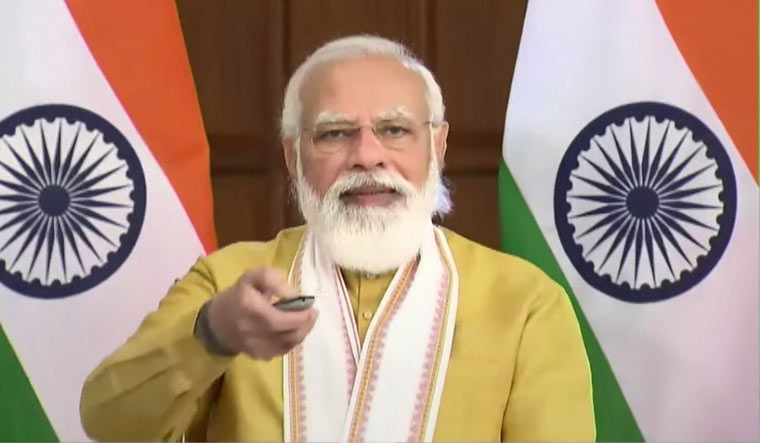 Prime Minister Narendra Modi on Monday launched the Ayushman Bharat Digital Mission, under which a digital health ID will be provided to people that will contain their health records. Modi asserted that it has the potential to bring revolutionary changes in health care.

In his address after the launch, Modi said the mission marks a new phase in efforts of the last seven years to strengthen health facilities.

The pilot project of the Ayushman Bharat Digital Mission was announced by the prime minister from the ramparts of the Red Fort on August 15, 2020.

Currently, Ayushman Bharat Digital Mission is being implemented in a pilot phase in six Union territories.

In his remarks, Modi said that the Ayushman Bharat Digital Mission has the potential to bring revolutionary changes to our health facilities.

The prime minister noted that India has nearly 130 crore Aadhaar users, 118 crore mobile subscribers, 43 crore Jan Dhan bank accounts, and such a connected infrastructure can be found nowhere else in the world.

The prime minister said that under the mission, people of the country will now get a digital health ID.

Health records of every citizen will be digitally protected, he said, adding that the poor and the middle class will benefit the most from this mission.

Emphasising on the importance of technology, the prime minister pointed out that the Aarogya Setu app helped a lot in preventing the spread of the coronavirus infection. He also noted that India has been able to administer about 90 crore vaccine doses, and the CoWIN application and its portal played a big role in it.

Based on the foundations laid down in the form of Jan Dhan, Aadhaar and mobile (JAM) trinity and other digital initiatives of the government, Ayushman Bharat Digital Mission will create a seamless online platform through the provision of a wide range of data, information and infrastructure services, duly leveraging open, interoperable, standards-based digital systems while ensuring the security, confidentiality and privacy of health-related personal information, according to the Prime Minister's Office (PMO).

It will enable access and exchange of longitudinal health records of citizens with their consent, the PMO said.

The key components of the Ayushman Bharat Digital Mission include a health ID for every citizen that will also work as their health account, to which personal health records can be linked and viewed with the help of a mobile application, a Healthcare Professionals Registry (HPR) and Healthcare Facilities Registries (HFR) that will act as a repository of all health care providers across both modern and traditional systems of medicine.

This will ensure ease of doing business for doctors, hospitals and health care service providers.

The Ayushman Bharat Digital Mission Sandbox, created as a part of the mission, will act as a framework for technology and product testing that will help organisations, including private players, intending to be a part of the National Digital Health Ecosystem become a health information provider or a health information user or efficiently link with building blocks of Ayushman Bharat Digital Mission, the PMO said.

This mission will create interoperability within the digital health ecosystem, similar to the role played by the Unified Payments Interface in revolutionising payments, it said. Citizens will only be a click away from accessing health care facilities, it added.