Ummu's grandmother has approached Kerala, Central govts to save her from the Taliban 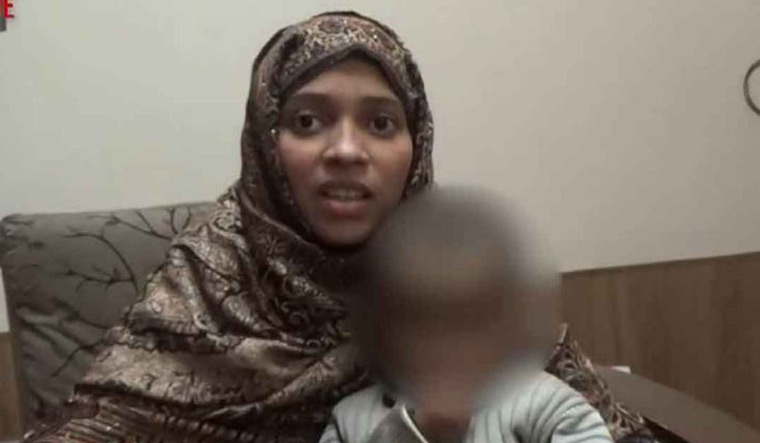 Screengrab of Nimisha Fathima with her child | Via onmanorama

Ummu Kulsu turns five on Friday. She is the daughter of Nimisha Fathima, one of the six women from Kerala who had left India to join the Islamic State in Khorasan Province (ISKP). She was released from the Kabul jail by the Taliban recently after it captured Afghanistan.

Ummu's grandmother, Bindu Sampath, is knocking on all doors, including the state and national child welfare councils, to “save her grandchild” from the hands of the Taliban.

“I have not even seen my granddaughter. All I have heard is her sound over the phone when Nimisha used to call me earlier,” said Bindu. “I know my daughter has committed a grave crime against the country by joining ISIS. Do put her in a prison in our country. But please don't throw her into the hands of the Taliban,” said Bindu on the verge of tears.

Nimisha, a dentist, was 7-months pregnant with Ummu Kulsu when she left the country along with her husband Bestin, a Christian who converted to Islam. Nimisha had told Bindu that she and her husband were leaving for Sri Lanka for business purposes.

Now, Bindu is pleading that Ummu Kulsu be handed over to her. “Why should she be thrown into the hands of the Taliban? What crime has that little child committed?” asked Bindu. “We all know the plight of girls under the Taliban,” she said.

Nimisha is among the 21 people who went missing from Kerala between May and July 2016. Among the ‘missing 21’, including six women and three children, were doctors, engineers and MBA graduates. They had planned their trips very meticulously and the only ‘proof’ they had left back were the messages some of them sent to their families on Telegram, saying they had reached Dawlatul Islam (territories under the control of the Islamic State).

Of the 21, most of the men are dead now, and the women have been arrested and lodged in jail since November 2019.

Gracey, the mother of Bestin and Bexon—two Christians who converted to Islam before leaving for Afghanistan—also told THE WEEK that she wanted her grandchild to be brought to the country. “Both my sons are dead now. All I have now is my grandchild,” Gracey said. “Wish I could get at least a glimpse of her,” she added.