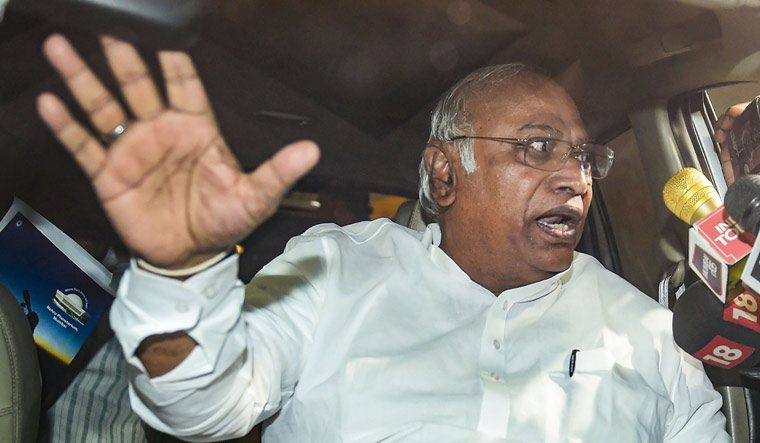 Every time Karnataka is faced with a political uncertainty and a leadership change, the chorus for a dalt chief minister grows louder. But the aftermath of such vociferous demand and protests that fizzle out in no time raises suspicion that it was only a diversionary tactic of vested interest groups and not a sincere call for anointing a dalit CM.

The chief minister's chair has remained elusive for the dalit leaders across all parties. The BJP's leadership crisis has once again triggered the demand for a dalit CM, strangely from former chief minister and Ahinda leader Siddaramaiah, who is blamed for sidelining veteran Dalit leaders in his own party.

"Once Yediyurappa resigns, the BJP should appoint a dalit CM as the party claims to have great concern for the dalits and commitment to social justice. Let Kateel appoint a dalit CM," said Siddaramaiah, the leader of the opposition, throwing a challenge to state BJP president Nalin Kumar Kateel.

Kateel hit back at Siddaramaiah, saying the Congress party had done great injustice to dalits and also humiliated Dr Ambedkar.

"Siddaramaiah seems to have forgotten that Dr Ambedkar had quit the cabinet due to the humiliation caused by the Congress party. The Congress not only defeated Baba Saheb in the Lok Sabha elections, but refused to give land for Dr Ambedkar's last rites. They did not give him the Bharat Ratna, too. They did not make Jagjivan Ram the prime minister," said Kateel.

The saffron party leader slammed Siddaramaiah, calling him a "migrant" leader.  "Siddaramaiah migrated to the Congress and ensured the defeat of Parameshwara. He was responsible for sidelining Kharge, Chandrappa and Dhruvanarayana,"  alleged Kateel, adding that the BJP, in its short tenure, had chosen Abdul Kalam from the minority community and Ramnath Kovind, a dalit leader, as the Presidents of India.

"In Karnataka, we have appointed Govind Karjol as the deputy chief minister and MP Narayanaswamy as the Union minister," added Kateel.

A closer look at the state politics reveals a saga of deprivation and perhaps discrimination, too, in the name of political prudence. The Congress party, which heavily banks on the "Ahinda" (minorities, Muslims and dalits) votes to win elections, is sure guilty of overlooking dalit leadership in the state for long.

Veteran Congress leader Mallikarjuna Kharge (77), who has made a mark in the national politics, has a record of sorts as he has missed the CM's post thrice, but has never raised the banner of revolt even once.

Kharge, who is the leader of the opposition in Rajya Sabha, has won eight consecutive Assembly elections (Gurmitkal and Chittapur), followed by two Parliament polls from Kalaburagi (SC reserved) in north Karnataka. But he lost the 2019 Lok Sabha elections to Dr Umesh Jadhav, the sitting Congress MLA from Chincholi, who  joined the BJP just before the LS polls.

In 1999, Kharge lost the top post to S.M. Krishna, and again in 2004, following a fractured verdict, the party chose N. Dharam Singh as the consensus candidate to head the Congress-JDS coalition government. In 2008, Kharge was the leader of the opposition during the Yediyurappa government. But he stepped down within a year and got elected to Lok Sabha, paving the way for Siddaramaiah.

In 2013, when the Congress party got a thumping victory, Siddaramaiah, who had joined the Congress in 2007 after being ousted from the JDS, beat him to the post.

Interestingly, JDS patriarch and former prime minister H.D. Devegowda recently claimed that he had proposed Kharge's name to the CM's post when the Congress high command mooted the JDS-Congress coalition after the 2018 Assembly elections delivered a hung verdict. While Gowda confided that the Congress leaders (Ghulam Nabi Azad and Ashok Gehlot) had offered the CM's post to JDS (H.D. Kumaraswamy), the Congress has not bothered to give any clarification on Gowda's statement on the issue of a dalit CM.

Another dalit leader and Koratagere MLA Dr G. Parameshwara missed the CM's post by a whisker.  In 2013, when the Congress Party swept 122 seats to capture power from the BJP,  Parameshwara suffered a major setback—a shock defeat in Koratagere constituency in Tumkur district. He had missed the race for the CM's post. There were murmurs of Siddaramaiah's role in turning away Kuruba votes away from Parameshwara which led to his defeat. In the Siddaramaiah government, Parameshwara was denied the deputy chief minister's post, too.

In 1989, Prime Minister Rajiv Gandhi noticed young Parameshwara and invited him to join politics. The same year, Parameshwara entered the state Assembly after winning the Madhugiri seat. He served as a minister in Veerappa Moily and S.M. Krishna governments. In 2008, he won the Koratagere seat, and was appointed as the KPCC chief in October 2010. His introvert nature and the image of an “elite” leader like his mentor and former chief minister S.M. Krishna, is perhaps why he fell short of being a mass leader.

In 2013, Parameshwara lost to JDS candidate P.R. Sudhakarlal by a huge margin of 18,000 votes. He was elected to the Upper House in July 2014, but was inducted into the Siddaramaiah cabinet (as the home minister) only in October 2015. According to sources, Parameshwara was kept out of the cabinet for long, as Siddaramaiah feared a parallel power centre. In 2018, Parameshwara became the deputy chief minister in the JDS-Congress coalition government.

This time, even as the party is bracing for the 2023 Assembly polls, both Siddaramaiah and Shivakumar are hoping to be the next chief minister. But there is a third faction led by Parameshwara and former MP from Kolar K.H. Muniyappa which is quietly lobbying for a dalit CM, if the Congress party captures power in the state.

In the BJP, which has been in power twice, a dalit CM seems far fetched for now, as the core vote bank of the party is still the Lingayat and other dominant communities, along with the Scheduled Tribes and Scheduled Caste (Left) communities. However, a prominent dalit face is Govind Karjol, a five-time MLA from Mudhol (Bagalkote), who has been appointed as one of the three deputy chief ministers in the Yediyurappa government. Karjol represents the marginalised SC (Left) community, which backs the BJP.

Another popular dalit leader in the saffron party is Ramesh Jigajinagi, a six-time MP from Vijayapura, who served as the Union Minister of State for Drinking Water and Sanitation in the Modi government in 2016. A member of undivided Janata Dal and three-time MLA Jigajinagi, who was mentored by Ramakrishna Hegde, joined the BJP only in 2002.

The dalit voter in Karnataka is no longer a single block but fragmented. The Scheduled Castes community with 101 castes accounts for 17 per cent of the population. The ST (Valmiki) community in Karnataka has 50 caste groups and accounts for 7 per cent of the total population. Former minister and Congress working president Satish Jarkiholi and BJP minister B. Sriramulu are the prominent faces from the community.

Dalit leader and Kollegal MLA N. Mahesh, who is an independent legislator (after being expelled from BSP) says, "Dalits should get their rightful share in political power. I have observed that dalit leaders in Congress party,  which claims to be pro-dalits and the oppressed classes, have remained deprived of power. Dalits and Muslims are the core vote base of the Congress. But the party has ensured these communities remain in the basement. There are many dalit leaders who are eligible to be the chief minister. The party high command, Smt Sonia Gandhi, Rahul Gandhi, D.K. Shivakumar and Siddaramaiah are aware of this. But dalits remain a mere vote bank of the Congress."

Mahesh feel the Congress party should show its commitment to social justice by anointing a dalit as the chief minister if the party comes to power in 2023. "Our community has been voting for the party unconditionally. The Congress high command had picked Gundu Rao, Veerappa Moily and Dharam Singh as the chief minister without any one demanding for it. So, the party on its own should choose a dalit leader as the CM. Mallikarjun Kharge and G. Parameshwar deserve to be the CM though the power tussle is now between former chief minister Siddaramaiah and KPCC chief D.K. Shivakumar."

Mahesh also has a piece of advice for his community members. "Our SC and ST communities are decisive in about 200 out of the 224 Assembly constituencies. We can make or break a government and also choose who should be our leader. But unfortunately the community is only a vote bank and the political parties are taking us for granted," he rued.

Calling out the Congress party's "double standards", Mahesh said, "When Veerappa Moily was made the chief minister, S.M. Krishna was his deputy. But when Krishna became the chief minister, Kharge was denied the deputy chief minister's post saying it would create a parallel power centre and threaten the stability of the government."