Muslims should know BJP came to power due to Congress: Kumaraswamy

The future is of regional parties, says the JD(S) leader 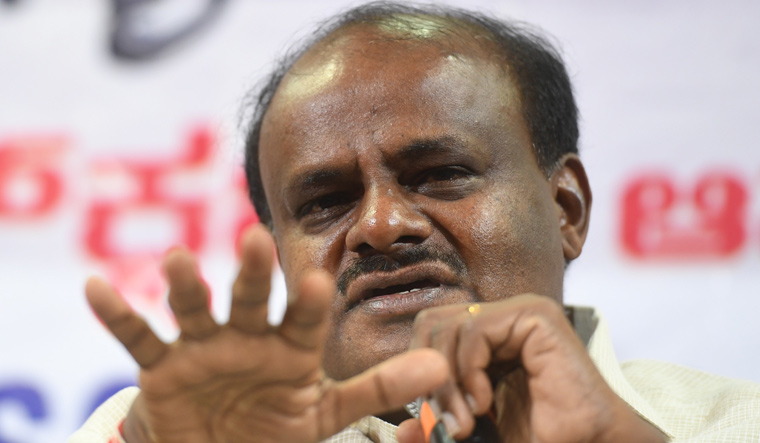 Former Karnataka Chief   Minister H D Kumaraswamy on Thursday asked Muslims to "realise" that the BJP came to power in Karnataka due to the Congress.

He claimed that the Congress will never come to power again and "the future is of regional parties", citing the "decline" of national parties in the recently concluded assembly elections in five states including West Bengal, Tamil Nadu and Kerala.

"If the BJP is in power in Karnataka at present, it's because of the Congress. My Muslim brethren should understand this. If BJP came to power in the state, it is not because of JD(S)," Kumaraswamy, the JD(S) second-in-command, said.

He was speaking at the party office JP Bhavan here at an event to welcome political workers led by a local leader Kadar Sheikh from Hanagal in north Karnataka into his party fold.

The JD(S) leader said, "Congress does not have strength to come to power independently.Our Muslim brethren in the state should understand this fact, or else you will continue to receive blows throughout."

He claimed that the Congress got majority in 2013 because the BJP split into three -- One was the BJP, the other two were the breakaway groups led by Chief Minister B S Yediyurappa and minister B Sriramulu.

He ridiculed the alleged internal strife in the Congress over who should be the next Chief Minister in the event of the party coming to power.

"There is an internal fight going on in the Congress over who should be the next Chief Minister when the elections are two years away.They are so desperate to come to power that they can't even wait for two years. They have begun stitching their suits thinking that they have already come to power," Kumaraswamy said.

Welcoming Kadar Sheikh, he said people from Hanagal joining JD(S) is an indication that the constituency will become "our gateway" to victory in north karnataka in 2023 Assembly elections.

The former Chief Minister underlined that every constituency is important for the JD(S) in Karnataka and his party intended to expand its reach and become a strong regional party by making its presence felt across the state.