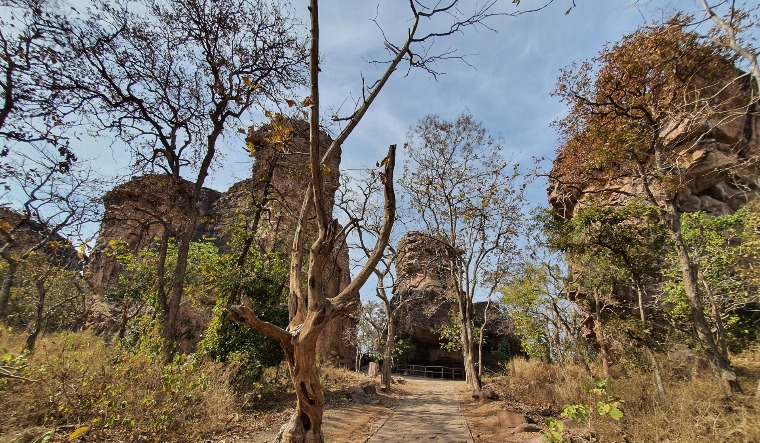 Saying physical intervention measures that essentially modify the fabric of heritage structures and sites are not the only options of conservation, renowned archaeologist S.B. Ota has stressed upon the need for appropriate place-specific management policies and involvement of the local community in the conservation process for better and long-lasting results.

Giving an example of world heritage site Bhimbetka, the expert said that opening up more sectors of the painted rock shelter site to tourists was important to reduce pressure on a single group of shelters (Bhimbetka III), which is currently open. Ota was personally involved in conservation measures at Bhimbetka as an officer of the Archaeological Survey of India (ASI).

Ota said that the three sectors of the world heritage site—Bhimbetka III group, Bineka and Bhonrawali groups and the Lakhajuar East and West groups—should be each opened by rotation for four months in a year, so that the adverse impact of high tourist footfall gets distributed, allowing arresting of soil erosion and vegetation growth/forest regeneration. Also it will break the monotony for the repeat tourists who will be able to see more rock shelters.

He was speaking at an online lecture on the topic Conservation through management and public participation: experience at Bhimbetka World Heritage site, organised by the Madhya Pradesh Directorate of Archaeology, Archives and Museums on the occasion of the 75th year of Indian independence. Ota retired as joint director general of ASI.

Ota spoke on his experience of conservation at Bhimbetka involving the local tribal community and also suggested conservation measures that do not modify the original heritage fabric. He said that growing suitable species of trees (as the thin-sediment layers near rock shelters do not support all kinds of vegetation) to provide a screen to the painted shelters to save them from impact of direct sunlight and high temperatures was important.

Ota added that an earlier intervention—wherein the local people were made aware of importance of conservation and convinced not to use and dump plastic/polythene bags, water pouches and guthka (paan masala) pouches during an annual religious fair inside the world heritage site campus—had brought very good results vis-à-vis garbage management and consequent adverse impacts. This practice has since been discontinued and should be reintroduced, Ota said.

He also spoke on certain provisions of the forest and wildlife-related acts—such as Indian Forest Act, 1927; Forest (Conservation Act), 1980, and Wildlife Protection Act, 1983—that have become hindrances to safeguarding the intangible heritage at the site. He made certain suggestions to remove these hindrances. Ota said that while there should be strict restrictions on outsiders on grazing cattle, collecting medicinal plants and herbs, cutting wood or exploiting the forests surrounding the world heritage site that is situated inside the Ratapani Sanctuary, these activities should be allowed to the local people who have been residing in the area since generations and provide continuity to human settlers since prehistoric times.

“The local people, with their knowledge and awareness about importance of the natural surroundings and resources, are part of the intangible heritage and never harm the heritage, but work to conserve them naturally. So it is important to involve them in the decision making as well as implementation of conservation plans for them to be successful,” Ota said while speaking to THE WEEK later.