Return of the past 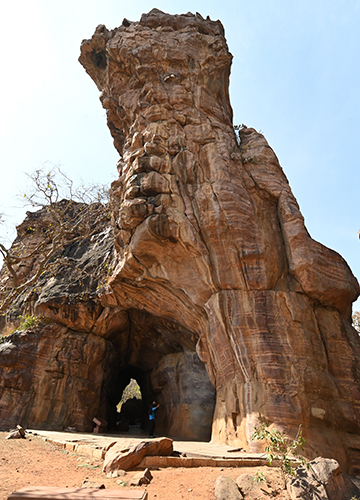 UNDER A PALE February sun, the massive reddish-brown sandstone outcrops at Bhimbetka loom like silent sentinels guarding ancient mysteries. Only the mysteries have suddenly deepened. The world heritage site, located 50km from Bhopal, is renowned for its paintings and etchings by successive generations of settlers from over 10,000 years ago. The current excitement is over a chance discovery that hints that the caves here could possibly have fossils from 550 million years ago.

In March 2020, by sheer chance, a group of Indian and international palaeontologists spotted three, white, leaf-like imprints—some of it obscured by soot—about 11.5 feet up on the roof opposite the entrance of the iconic sphinx-shaped shelter No 3 of Bhimbetka, also known as the auditorium cave. The researchers were stunned by the fact that they might have just discovered the first ever Indian fossils of the complex early life form called Dickinsonia that thrived just before the explosion of life on the earth in the Cambrian period, which extended from 541 million to 485 million years ago.

The scientists had come to India to attend the 36th International Geological Congress (IGC). The sessions were, however, cancelled because of the Covid-19 pandemic, but some of the participants from the US and South Africa, accompanied by a few officers of the Geological Survey of India (GSI) went ahead with their planned pre-conference tour, and Bhimbetka was one of their last destinations.

Among them was Gregory Retallack, a palaeontologist from the University of Oregon, who has been working on fossils like Dickinsonia for years. The group photographed the imprints extensively for future study, as they were not carrying any scientific instruments. After his return to the US, Retallack undertook an in-depth examination of the images using the latest 3D modelling software, and confirmed his hunch that they had stumbled upon the first ever specimens of Dickinsonia fossils in India. A scientific paper on the finding was published in the February 2021 edition of the international journal Gondwana Research, which has attracted a great deal of attention from the scientific world.

Dickinsonia is considered to be one of the most iconic and controversial fossils of the Ediacaran period that extended from 635 to 541 million years ago. Retallack told THE WEEK that the discovery was extremely significant as it confirmed that the Indian subcontinent, along with Australia, was part of Gondwanaland, the supercontinent which was fully assembled by some 550 million years ago. The discovery gave a conclusive age of at least 550 million years to the Upper (later) Vindhyan rock formations that host pre-historic sites like Bhimbetka. There has been no clinching evidence of the actual age of the basin hosting Bhimbetka till now, though the early levels of the Vindhyan ranges are considered to be as much as 1.6 to 1.7 billion years old.

The claim of the discovery, however, has not gone uncontested. Retallack’s claim that Dickinsonia—earlier reported from Australia, Ukraine, Russia and more recently from China—was lichens (a symbiotic partnership of a fungus and an alga) that lived on land has been controversial. Most experts believe that Dickinsonia was an animal that lived on the seafloor.

There are also questions whether the find reported from Bhimbetka is indeed Dickinsonia. Some experts feel that the impressions could well be rock paintings or petroglyphs (prehistoric rock carvings). “These are potentially very interesting specimens; however, it is not clear to me whether or not they are fossils,” Emily Mitchell, palaeontologist with the University of Cambridge, told THE WEEK. “I think more work is needed to determine that. If they are fossils though, it would be very exciting because no Dickinsonia had previously been described from the Indian subcontinent.” Mitchell said although Dickinsonia was said to have lived in the sea, it was very common to find marine fossils far away from present day seas. “Because of plate tectonics, the sea-beds can be pushed up to shallow water and indeed onto land through millions of years.” 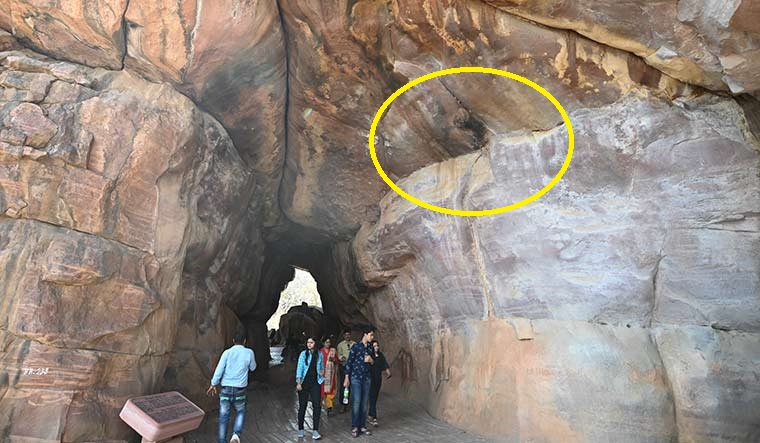 Relics of the past: The claimed Dickinsonia fossil in the auditorium cave at Bhimbetka | Mujeeb Faruqui

Retallack and his co-authors list numerous similarities between the Indian specimens and those found in South Australia, from the host rock to the shape, pattern, alignment and the missing pieces to claim that what they found in Bhimbetka was indeed Dickinsonia. Retallack ruled out the specimens being rock art.

Even as the latest discovery is getting talked about a lot, parts of the three specimens have apparently started to flake off. THE WEEK shared with experts the latest photographs of the specimens and the photographs taken last March. “This is concerning. The fossils appear to be more delicate than we thought,” said Retallack. “It was already encrusted in soot from a palaeolithic fire pit excavated below. Perhaps that material is etching the fossils and falling off.” Mitchell said such peeling could happen because the specimens were more vulnerable to other erosive effects once exposed. “For example, increased moisture that could come with increased human presence could cause different layers of rock to peel apart,” she said.

An interpretive sketch (a), a photograph (b), and a false-colour elevation model from photogrammetry (c) of Dickinsonia

But human presence has hardly increased. Bhimbetka attracts about 200 visitors a day, which goes up to 600 on weekends. The numbers have not shown any change even after the discovery of the rare fossil. “We planned a visit here because we had come to Bhopal for a family occasion. We did not know about the fossil,” said Divyanshu Tiwari from Jabalpur, who was in Bhimbetka with his family.

While the international scientific community is engaged in a debate on the discovery, the obvious question that is dogging the domestic circuit is how the specimens—found at a very obvious spot in one of the most visited rock shelters in the country—remained undetected for so long. Bhimbetka, essentially an archaeological site, is under the protection of the Archaeological Survey of India (ASI). Senior archaeologists Narayan Vyas, known for his work with V.S. Wakankar who discovered Bhimbetka, and S.B. Ota, former central region director of the ASI, said the study of fossils was a different subject and archaeologists were not trained to spot their presence.

“It is clearly a subject area of palaeontologists. Our purview of work extends only till back in the time of the beginning of human evolution, which is about 2.5 to 3 million years ago,” said Ota. Vyas said a team of geologists had surveyed the Bhimbetka area before it was declared a world heritage site in 2003, but their scope of work was limited to surveying and ascertaining the number of rock shelters.

The GSI, which is the nodal agency for geological surveys and research in the country, did not respond to emails sent by THE WEEK. The ASI, too, has not yet heard from the GSI. Piyush Bhatt, superintendent archaeologist of the Bhopal circle of the ASI, said there had been no communication from the GSI about the discovery. But he made it clear that the ASI’s permission was mandatory for any further study at Bhimbetka.