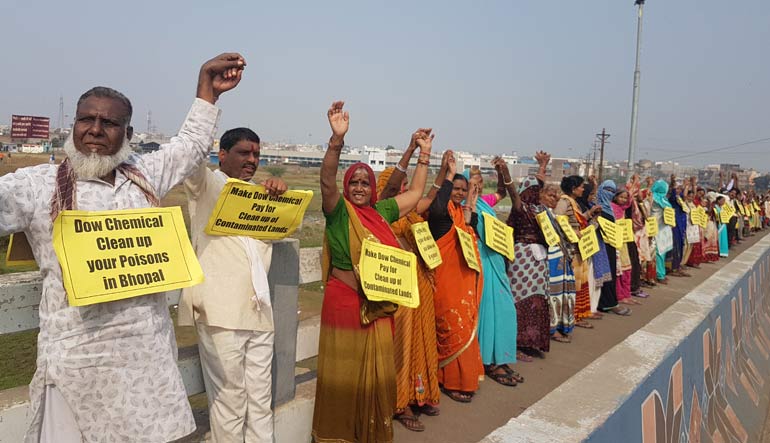 Survivors of Bhopal gas tragedy vehemently opposed what they claim are attempts at disposing off a minuscule amount of the entire toxic waste on the abandoned Union Carbide factory premises, without proper assessment of the extent, depth and spread of the chemicals due to toxic waste dumping.

Different organisations of the gas tragedy survivors have called upon the state government to first get the hazardous waste amount and impact scientifically assessed and only then initiate the work of waste disposal.

Deadly methyl iso-cyanate (MiC) gas had leaked from the Union Carbide factory on the intervening night of December 2-3, 1984, killing thousands and maiming lakhs for lifetime.

The survivors’ statements have come after the Bhopal gas tragedy relief and rehabilitation minister Vishwas Sarang said on Sunday that the state government has decided to go ahead with construction of an ‘employment-oriented’ memorial on the abandoned Union Carbide factory premises. As a first step, tenders have been issued to dispose of the hazardous waste (about 337 metric tonnes kept packed in a shed) on the factory premises, the minister said.

The survivors’ organisations have also questioned the hastiness of going ahead with building of the memorial without proper disposal of entire toxic waste and asked as to what kind of employment will it generate and how will it benefit the survivors.

Rachna Dhingra of the Bhopal Group of Information and Action said according to a report of the National Environment Engineering Research Institute (NEERI), Nagpur, toxic waste has been dumped in 21 spots on the abandoned factory premises. Waste was especially dumped in the solar evaporation pond made on 32 acre land from 1977 and due to breach in the plastic lining of the pond in 1982, toxic chemicals from the waste started seeping into the ground water.

Scientific studies have shown that even now, groundwater in 48 settlements near the factory are polluted by the toxins and impact the brain, kidneys and liver of the residents. Also children born here have congenital abnormalities.

“The 337 MT waste in question is just about five per cent of the entire waste. The solar evaporation pond itself contains as much as 1.7 lakh tonne toxic sludge and the waste cannot simply be disposed off without scientific assessment. The government should rather float international tenders for comprehensive assessment of depth and spread of the chemicals from toxic waste before anything else. It should also make Dow Chemical (current owners of Union Carbide) pay for the disposal of the waste by pressing the pending petition in MP High Court in this regard,” Dhingra said.

Meanwhile, Balkrishna Namdeo of Bhopal Gas Peedit Nirashrit Pension Bhogi Sangharsh Morcha has also highlighted similar points and added that in year 2007, the Gujarat government had refused to incinerate the Union Carbide toxic waste in Ankleshwar and urged the Supreme Court to stay an order of the MP High Court in this regard. The issue is still hanging fire.

Meanwhile, there is yet no forward movement on a 2012 decision of the group of ministers on Bhopal to send the toxic waste to Germany for incineration at the cost of Rs 25 crore. Namdeo said unless the entire waste on the premises is scientifically disposed, there is no point in constructing a memorial there.

Sadhna Karnik of Bhopal Gas Peedit Sangharsh Sahayog Samiti alleged that the government is trying to wipe off the evidence of the criminal case of Bhopal gas tragedy by attempting to construct a memorial there without proper disposal of toxic waste. She said that there is no objection to disposal of the toxic waste (337 MT) kept in the shed, but superficial disposal without studying the extent and impact of the toxic waste will be dangerous.

Construction of concrete memorial on the non-disposed waste will force the people in surrounding areas to continue drinking toxic water.