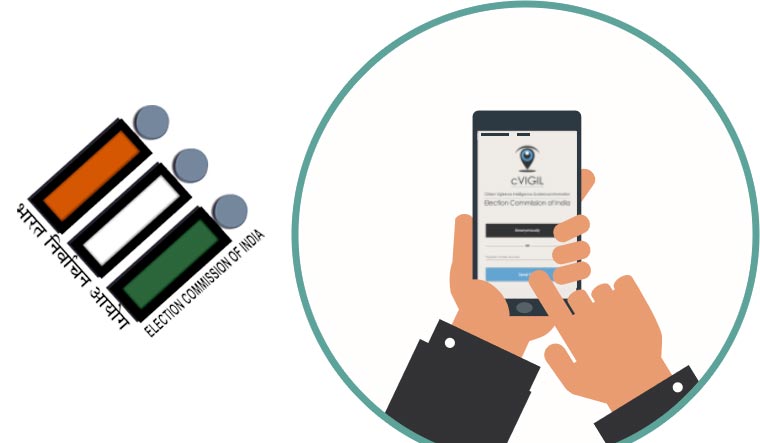 Electoral integrity in a democracy has many facets, but inclusiveness, fairness, and representativeness are often quoted as its qualitative dimensions.

Elections must be participative and inclusive for all competent voters. The citizens make a free and informed choice among the candidates and policies on offer.

Their votes ought to reflect a convergence of opinion, resulting in seats in the legislature as well as policies that underlie future public action.

This ideal is difficult to achieve, and all democratic societies and nations have established regulatory and institutional frameworks to strive for this goal. This duty primarily vests with the Election Commission (ECI) in India. The ECI has frequently used digital technology to accomplish this task and EVMs are the best-known examples of such initiatives. A lesser-known but more significant innovation of the ECI is the cVIGIL App.

What is the cVIGIL App? How would it make elections fairer and more transparent? Why is cVIGIL looked upon as a tool of the future? An answer to these questions requires peeling back a few layers of the election process.

Elections in India are full of din and dash. The ardour and fervour of political parties are matched by leaders' energy and rush. Big rallies are organised; roadshows happen; small street corner gatherings are addressed; neighbourhood leaders are wooed; booth agents are recruited, and door to door canvassing is undertaken. The feverish search is to somehow capture and articulate that narrative that voters prioritise at that point of time.

The purpose is to engage with the proverbial common man, in his avatar as the typical voter. And the objective is to get his vote. These activities require men and resources, and both cost money.

Who pays for the electoral expenses, and do we need limits on such expenses? Is the democratic process vitiated by misuse of power and money by one or more aspirants? How can we stop voter mobilisation on an issue that causes fissures within the community based on caste, class, or faith?

These are critical issues for those entrusted with the conduct of the elections. An officer in the Kerala state assembly elections of 1960 suggested a voluntary code of conduct for both candidates and political parties as a possible solution to these vexed issues. His move found resonance with all stakeholders, and over time a rule book of desired practices came to be prescribed by the ECI under the nomenclature of the Model Code of Conduct. The task of implementing the Code is assigned to the local administration and central observers, who the ECI deputes from outside the state boundaries to ensure unbiased supervision that is devoid of local political pressures.

Over time, the ECI has realised that local ingenuity often defeats the efforts of the administration and of outsider observers in implementing the Code. The urgent need is to engage the common citizen and the local community to police the fair elections process. cVIGIL aims to spur and rouse the common man to participate in efforts of transparent and fair elections.

cVIGIL is a free app developed by the ECI for use by citizens during electioneering. The aim is to incentivise a mindful and observant citizen to engage in supervision of the Model Code of Conduct and to report any indiscretion of law or desired practices. All that is asked of the citizens is to record such evidence on their smartphones and transmit it to the local regulatory authority entrusted with the conduct of free and fair elections.

The indelible imprint that a complaint under cVIGIL leaves in the records is expected to spur immediate action by the regulatory and administrative authorities. The current mandate is to prepare and submit a first action taken report within 100 minutes of the receipt of the cVIGIL complaint.

The initial response from the public has been very encouraging. More than 1.61 lakh cVIGIL grievances were received in Kerala in different districts for the assembly elections in April 2021. Initial enquiries found 1.58 lacs to be factually correct.

The message is loud and clear: If a platform is given to the public, where they have algorithmically assured protection of anonymity, their time and resource engagement is kept minimal and without litigation, and their voice elicits an immediate response, then the man on the street is willing to collaborate with the state to cleanse the election process.

Gandhiji's long march in the salt satyagraha did not win us freedom immediately, but it laid out the contours of the future freedom struggle; it would be a peaceful and non-violent public protest against all injustices. By introducing digital innovations like EVMs and cVIGIL, the ECI is also laying out the future of the election reform; it would be a participative and public initiated movement supported by digital technology, where the violators of the best election practices would be laid bare by the power of anonymous and amorphous citizens.

Dr P.S. Puniha is a Special Expenditure Observer and a retired IRS officer. He holds a PhD in Public Policy from the University of Southern California, Los Angeles.