Pragya Thakur's tweet attracted a volley of comments, most of them highly critical 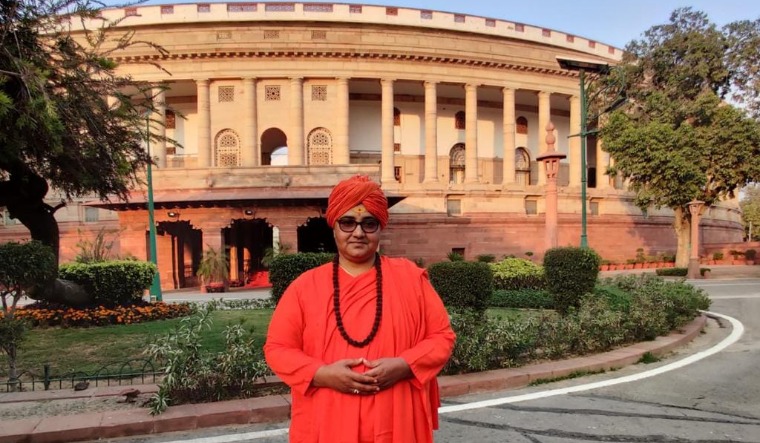 Bhopal Member of Parliament (MP) Pragya Singh Thakur, all too known for her contentious statements, has yet again managed to court controversy, tweeting about post-poll violence in West Bengal and calling for “tit for tat”.

Thakur, who has been proclaimed 'missing' from the parliamentary constituency time and again amid the raging pandemic, called the West Bengal Chief Minister Mamata Banerjee names in her tweet without actually naming her.

She used terms like Mumtaz (an obvious distortion of the name Mamata), kalankini (disreputable) and taadka (after a mythological demon slain by Lord Ram) for Banerjee. The controversial MP added that only President's Rule (in West Bengal) and implementation of NRC (National Register of Citizens) were the solutions (to violence in West Bengal).

“Mumtaz democracy, Hindus, BJP workers brutally killed and raped. O kalankini enough. It has to be tit for tat. Only the President's Rule and NRC are the solutions. Now there is reign of Taadka on the land of saints and courageous. It is imperative to become 'Ram' now,” Thakur tweeted, while tagging official Twitter handles of the BJP and RSS.

Thakur's tweet attracted a volley of comments, most of them highly critical and calling her out for trying to incite violence. Others also questioned her silence on the COVID-19 situation and deaths and her failure to come to the aid of Bhopal citizens.

Earlier, 'missing' posters of the parliamentarian had come up at various places in Bhopal including outside the BJP headquarters in Bhopal and her total absence on the front of helping her constituents during the raging pandemic. The BJP local office continued to defend her, saying that she was unwell and admitted to hospital for treatment.

Thakur also did not say much about COVID-19 on social media, except for sporadic tweets about government arrangements and the vaccination drive. She recently tweeted to say that the entire staff and family at her official residence in Bhopal had tested positive. Some were in hospital and some quarantined at home, Thakur had tweeted, calling on citizens of Bhopal not to move outdoors unnecessarily and to use masks and sanitisers.

Bhopal continues to be one of the COVID-19 hotspots of Madhya Pradesh and there have often been reports of shortage of oxygen, hospital beds and lifesaving drugs like Remdesivir. Deaths due to shortage of oxygen have been reported from government-run as well as private hospitals in the state capital.

Meanwhile, the Congress lashed out at Thakur for her latest controversial tweet. General secretary of MP Congress media cell, K.K. Mishra tweeted “Unaware of the heaps of bodies due to COVID-19 crisis, Pragya Singh has suddenly appeared and that too in the context of Bengal and Mamata Banerjee. Called her (Banerjee) Taadka, asked for the President's Rule in Bengal. It would have been better if she would have spoken as the sister of the Ravana who abducted the Sita of MP's democracy and on how many deaths have occurred in Bhopal.”