Fire safety at hospitals in Maharashtra goes for a toss 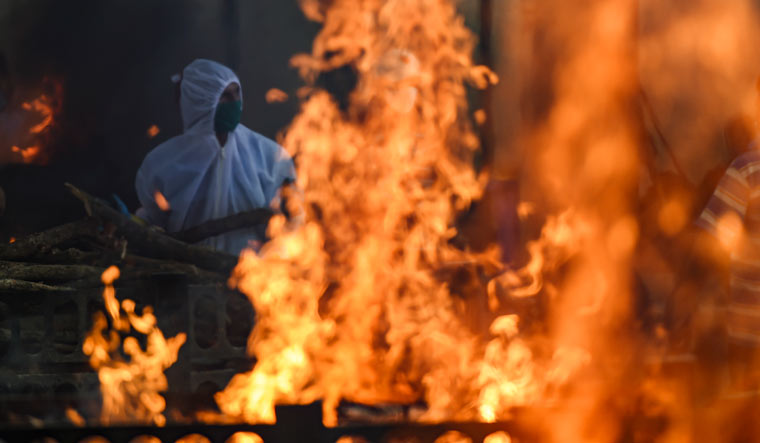 Cremation of COVID-19 victims who died due to a fire at Vijay Vallabh Hospital at a crematorium in Virar West, on the outskirts of Mumbai | PTI

"There was no need to construct a hospital there in the first place. Now with the COVID-19 centres being created by the government on a war-footing, there are bound to be issues. How can you construct a temporary hospital inside a mall? The choice is between two evils: to allow people to die from COVID-19 or allow people to die by creating temporary hospitals," said M.V. Deshmukh, former director and fire adviser to the government of Maharashtra, in an interview to THE WEEK on May 4. He was responding to the tragic fire breakout inside a hospital in Mumbai's Bhandup area, which killed nine patients.

Further commenting on the massive fire breakouts across the state in four different locations in the past four months, he said, "Due to the overburdening of the infrastructure as a result of COVID-19, these fires have broken out. Which state in the country has a system for fire audit? None. At least Maharashtra has its licensed agencies who actually know the job of fixing the problems."

On the morning of April 28, at least four persons died after a fire broke out at Prime Criticare Hospital, a private hospital in Maharashtra’s Thane district. Twenty patients were under treatment at the non- COVID-19 healthcare facility when it caught fire. Six of these patients were admitted in the Intensive Care Unit (ICU). The reason for the fire at the time was said to be a short circuit in the meter room of the hospital. Just a week before this fire, another one took place at pre-dawn at Vijay Vallabh hospital, a COVID-19 facility in Virar in Palghar district, in which 15 patients died. All of them were admitted in the ICU. The reason cited by the officials was negligence and violation of fire safety norms.

Less than a month before this fire in the hospital in Virar, was the fire in the hospital in Bhandup area. It was a massive fire - close to 70 patients were evacuated as the fire which broke out on the first floor of the mall spread to the third floor that housed the COVID-19 patients and took 40 hours to be doused. Of the nine patients killed, most were senior citizens and six were on ventilators. When the fire broke out, 78 patients were being treated at the hospital. The reason confirmed by the authorities at the time was that the building's fire system, including sprinklers, and fire safety equipment such as fire alarms and smoke detectors were not functioning. Exactly two months before that, on January 20, 10 infants died in a fire that engulfed the entire outborn section of the Sick Newborn Care Unit of a district hospital in Maharashtra's Bhandara. The reason was a short circuit that led to the fire.

Within 120 days, four hospitals in Maharashtra caught fire in which more than 40 patients lost their lives, including infants. And in every case, it was found that the cause was gross negligence, non-compliance with fire safety rules and the absence of fire audits across all these facilities. Take, for instance, the case of Virar's Vijay Vallabh hospital. According to an investigation by a Mumbai daily, it has come to the fore that the hospital’s No Objection Certificate from the fire department had expired on March 13 this year and it was never renewed. After the crime branch took over the investigation into the fire, it reportedly said that the fire department of Vasai Virar City Municipal Corporation had been issuing NOCs to hospitals in the area sans acquiring the 'Fire Risk Audit' report, which is mandatory as per government resolutions and the order of the Supreme Court.

The issue was also discussed in the state assembly after a BJP MLA from Mumbai raised the subject following the tragedy in Bhandara. At the time, state Health Minister Rajesh Tope had said that fire safety audits had been completed in 323 of the 567 hospitals in the state. The tragedy is that in its own survey which it conducted in Mumbai in March, the BMC (Brihanmumbai Municipal Corporation) found that of the 1,324 facilities which included hospitals, nursing homes and maternity homes, more than 50 per cent were found to be non-compliant with the Fire Prevention and Life Safety Measures Act of 2006. A few days later, the Bombay High Court asked the state government to conduct fire-safety audits of all hospitals and ensure compliance at the earliest. Yet, hardly anything remains done on the ground. Although, as per the FPLSM Act, licensed private agencies can carry out compliance checks at hospitals, there is no system to verify whether they are actually doing it.

Even more unfortunate is the fact that despite promising to take action against defaulters in every case of major fire breakout, no action has been initiated yet. Take, for instance, the tragedy that took place at Bhandup's Sunrise Hospital inside the mall. A day after, the BMC had ordered an investigation into the issue led by Deputy Municipal Commissioner, Disaster Management, Prabhat Rahangdale, and gave the team 15 days to submit its report. However, it has been more than one month since the incident and no report has come in. When THE WEEK approached Rahangdale, he said the team was on an extension owing to COVID-19.

Talking about the measures taken by the government after the tragedies took place, Deshmukh told THE WEEK, "The directorate of Maharashtra fire services has issued an express order to visit the hospital in certain jurisdictions demarcated to the nodal officers to see that at least the preliminary things are in order. Under the Maharashtra Fire Act, the fire contractors are licensed to visit the hospitals and check if the systems are in order. The Commissioner of Social Welfare is appointed as a nodal officer to get all the hospitals checked. And every district magistrate is directed to form local teams and get government hospitals in districts inspected and private hospitals have been asked to get the audit done at their end and submit the report to the government."