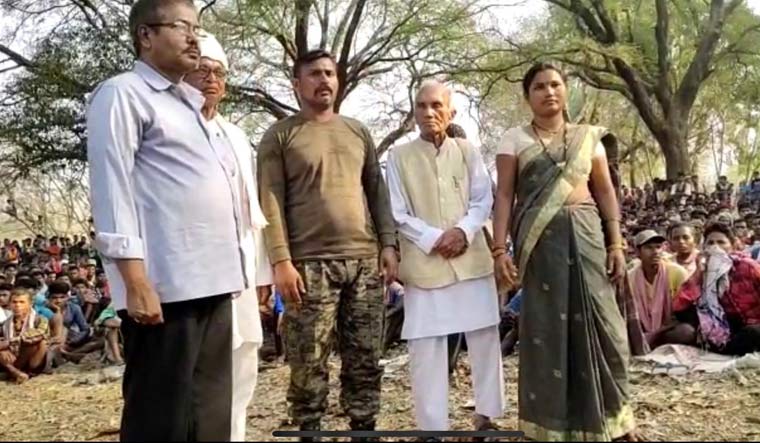 A CoBRA (Commando Battalion for Resolute Action) commando abducted by the Maoists after the deadly encounter in Bijapur on April 3, was released on Thursday.

Constable Rakeshwar Singh Manhas of the 210th CoBRA unit of the CRPF was handed over to a two-member government mediation team of social worker and Padma Shri awardee Dharampal Saini and Gondwana Samaj leader Telam Boraiya and brought back to Tarrem police station in Bijapur, where he was handed over to a CRPF official (DIG Komal Singh), sources told THE WEEK. The jawan, whose medical examination found him fit, is to be sent to Raipur through helicopter, sources added.

Chhattisgarh chief minister Bhupesh Baghel took to social media to officially confirm the release of jawan Rakeshwar Singh Manhas. He tweeted that the safe release was secured by the efforts of the central and state governments and local police officials and added that it was a matter of extreme happiness for the family of the jawan, people of the country and the state.

"I express gratitude to the representatives of social organizations including Dharampal Saini ji and local journalists who aided the campaign of securing the release of the jawan," Baghel tweeted.

Manhas was reported as missing after the Bijapur encounter that left 22 security personnel dead. The Naxals admitted that four of their members, too, were killed. The ultras claimed that they had held captive the jawan and asked the government to name mediators for his release.

Sources said that the two-member mediation team formed by the state government on Wednesday had left for the forests on Thursday morning along with a team of local journalists.

Hundreds of villagers were present as the jawan was released unconditionally in a jan adalat in Jonaguda area.

According to sources, while the state government had not made any official statement on the offer of the Naxals to send across mediators for the release of the jawan, some tribal leaders and social workers were approached for mediation and finally Saini, who has been working for the education of tribal girls in Jagdalpur for a long time, agreed to be the mediator along with Boraiya.

Earlier on Wednesday, an attempt to secure the release of the jawan by a civil society group inclusive of activist Soni Sori had not borne fruit as the Maoists reportedly insisted on talking to government mediators. THE WEEK tried to contact Dharampal Saini, but his phone remained out of network.

Meanwhile in Jammu, Manhas's family expressed happiness at his release, local media reported. His wife said that they were confident that he would be released but were concerned at the silence of the government. The family had participated in a protest demanding Manhas's release in Jammu on Wednesday.