Will the opposition plan to consolidate minority votes work? 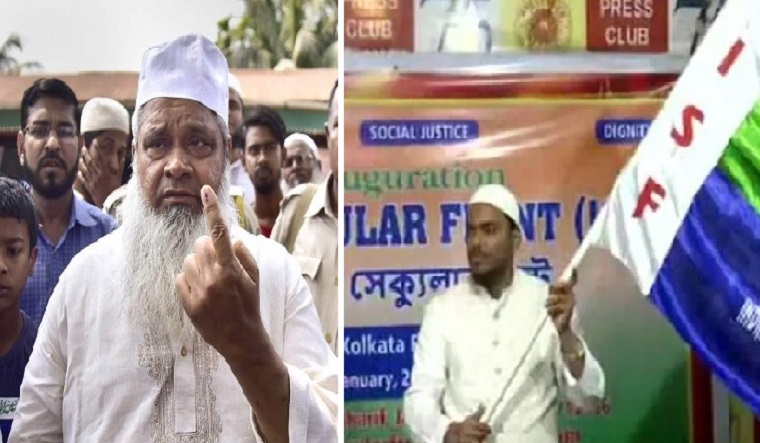 His speech was emotive. "Muslims and dalits will not play second fiddle anymore," Siddiqui spoke to rapturous applause. The effect of Siddiqui’s presence was evident as the audience broke into thunderous cheer when he graced the stage, but the crowd scattered soon after he left the dais. Most notably, Siddiqui mentioned the left parties including CPI(M) leaders, but almost intentionally left out the Congress party—an alliance member very clearly not sold on Siddiqui's inclusion in the coalition.

The BJP, as expected, condemned Siddiqui's 'left' political entry as a “brazen appeasement” move. “Yesterday’s rally was a brazen display of appeasement politics by the left and Congress. We would appeal to people to thwart efforts to divide West Bengal for the second time,” he said.

More surprisingly, voices of opposition in the Congress went public. Veteran Congress leader Anand Sharma was the first to express his displeasure. Sharma pointed out that Congress cannot be selective in fighting communalists and added that the party should fight communalism irrespective of religion and colour.

Later, on May 16, veteran Congress MP Abu Hasem Khan Choudhury directed a jibe at the CPI(M), saying that it was the latter's decision to ally with Siddiqui. "We did not join hands with Abbas Siddiqui. CPI(M) allied with his party. I think they felt that they may not get a single seat in the elections, so they forged an alliance with him," Choudhury said. "We forged an alliance with the left at first, then they went and allied with Siddiqui. We told them that we did not like it, but they were scared that they may perform badly in the elections. So, they joined hands with Abbas, if he can get them eight-ten seats in the name of religion," he added.

It is not just Siddiqui in West Bengal. Assam's Maulana Badruddin Ajmal, the face of the All India United Democratic Front (AIUDF), aligned with the Congress, is another Muslim politician in the spotlight during the election season. The BJP had dubbed AIUDF as communal, with Union Home Minister Amit Shah calling the Congress "shameless" for talking of secularism and culture preservation even as it had Ajmal "seated on its lap".

Both the Muslim leaders had a single retort: Stop polarising, look at the division in communities of candidates, and then decide what is secular.

Siddiqui in West Bengal Abbas Siddiqui is an influential cleric, one of the pirzadas, of the very popular Furfura Sharif in West Bengal's Hooghly district. Muslims, accounting for 30 per cent of the population, can make or break elections in the state. For the Congress and the left, who were left with a minuscule 12 per cent of votes in the last Lok Sabha elections, Siddiqui represents a chance to make inroads into the southern belt Muslim votes which were earlier concretely pocketed by the TMC. Congress had always had a foothold in the northern belt comprising Malda and Murshidabad.

Siddiqui was said to be in talks with AIMIM's Asaduddin Owaisi for an alliance, but the former cut ties with the latter in favour of the left parties.

An alliance with the ISF chief for Muslim votes is certainly not a foolproof idea. Siddiqui, still politically untested, can sink or swim in the state which has a diverse cast of Muslim traditions including Shias, Deobandis and more. Also, Siddiqui is known for making fundamentalist statements in the past. He called TMC MP Nusrat Jahan as one "who sells her body", was criticised for a video in which he sought a virus that could kill crores in India, called TMC leader Firhad Hakim a "non-believer" for taking part in Durga Puja, and more.

However, a profile in the NewsClick argues that "fundamentalist" would be an unfair tag on Siddiqui as he speaks for his community, but addresses issues through the prism of class.

The article argues that Siddiqui works for dalit-Muslim-tribal unity, saying that the ISF has a tribal as its president Simul Soren, and that all the ten organisations represented in the Front articulate the interests of subaltern Hindu groups. "Abbas often blames Chief Minister Mamata Banerjee and her Trinamool Congress for allowing the BJP to strike roots in West Bengal.

She participated in Muslim religious congregations and visited devotees offering Eid prayers. These are the activities of maulanas and muftis, he argues. Instead of engaging in such tokenism, her government should focus on generating jobs, health and educational facilities," according to the report.

The candidate list of ISF consists of a mix of dalits, Muslims, upper caste Hindus and tribals. A senior leader of the ISF told The Indian Express: “With our list we are saying that we are not communal. We are fighting for all backward people and our candidates list reflects that. We will maintain that.”

Whatever happens, Bengal will witness a communally charged election this time, largely driven by identity politics, with the TMC and the BJP accusing each other of fanning communal sentiments ahead of elections. Siddiqui's entry has been criticised by most opposition parties. The politically crucial Matuas and mashudras, who had fled from Bangladesh due to religious persecution, voted for the Left for decades, before shifting lock stock and barrel to the BJP during the last Lok Sabha polls, following the promise of citizenship under a newly amended law. The TMC feels the ISF's entry into Bengal's poll arena will further deepen the divide and help the BJP by eating into the ruling party's Muslim vote base.

"This time, assembly elections will be different from the ones we have witnessed since independence. The BJP has long been trying to create divisions among the communities. But we will fight against it and work to unite people," senior TMC leader and MP Sougata Roy said. The saffron leadership, too, agreed that communal polarisation was on the rise in the state, but blamed appeasement politics by the TMC for its upsurge. "For us, the election plank happens to be 'development for all'. That said, appeasement politics and injustice towards the state's majority community by the TMC government has indeed led to communal polarisation in Bengal," BJP state president Dilip Ghosh said.

The opposition Congress, on its part, trained guns on both the TMC and the BJP for fomenting divisive politics. CPI(M) politburo member Mohammed Salim, however, stressed that the narrative wouldn't yield any result as masses are "fed up with the misrule" of the TMC and the BJP at the state and the Centre respectively. "Had communal narrative been at play in the past [during CPI-M rule], people would have seen saffron camp and other fundamentalist forces gaining ground back then. But that was not the case. True, this time parties are playing the communal card, but issues concerning common people such as fuel price hike, corruption and unemployment will negate its influence to a large extent," he said.

The elections in Assam are being held in the shadow of the controversy over the Citizenship Amendment Act and the National Register of Citizens. The BJP, which had made its entry into the northeast with a victory in Assam in the previous election, is banking on its welfare measures. The Congress, which is bereft of a face to offer after the death of former chief minister Tarun Gogoi, is hoping that the popular sentiment against CAA-NRC would help it. It has entered into an alliance with Badruddin Ajmal's AIUDF, hoping to consolidate the Muslim votes. However, Ajmal's perceived support of illegal Bangladeshi migrants could work out against the Congress in seats outside of the AIUDF zone of influence.

A perfume baron helming Ajmal Perfumes, a brand spread spread all over the Middle East, the AIUDF chief broke out in Assamese politics in 2005 in some style. He created quite a stir as a newcomer campaigning in Muslim-dominated areas, prompting then Congress chief minister Tarun Gogoi to sarcastically comment: "Who is Badruddin?" Ajmal's party won 10 seats in the 2006 assembly elections, 18 seats in 2011 and 13 in 2016.

In Assam, the Muslim populace of over one crore are dominant in three constituencies—Dhubri, Barpeta and Karimgunj. They also live in big proportion in six other Lok Sabha seats including Silchar, Tezpur and Naogaon, where they are around 40 per cent of the total population. In tribal areas like Konkrajhar and Bodoland as well, Muslims have large presence.

That is where Ajmal comes in.

In Assam, Ajmal, the Lok Sabha MP from Dhubri, is completely against implementationof the amended law. The party enjoys support of a large number of  Muslims in Assam. A section of the Congress believes that an alliance with the AIUDF, a party that is identified as espousing the cause of the non-Assamese Muslim voters in the state, would help consolidate the Muslim votebank.

Muslims comprise 35 per cent of the state's population. Leaders in favour of the alliance argued that if there was no tie-up with the AIUDF, the Congress would lose minority votes to Ajmal.

The argument of those in the Congress opposed to having an alliance with the AIUDF was that it would lead to an alienation of the indigenous Assamese voters who view Ajmal as a leader of the Bengali-speaking Muslims and fear that their culture is under threat from outsiders.

Home Minister Shah had highlighted the Congress's links with Ajmal extensively during rallies. "The Congress cannot save Assam's glory with Ajmal by its side, and this message should be taken to every household in the state by the cyber warriors," he stated. "Can the Congress, with the All India United Democratic Front (AIUDF) as ally, stop infiltration? Can they realise the dreams of Assam icons such as Vaishnav saint Srimanta Sankardeva, Ahom warrior Lachit and multi-faceted personality Dr Bhupen Hazarika?" he contended.

BJP leader Devendra Fadnavis on Tuesday slammed the alliance of Congress and AIUDF, calling it mahakhot (great flaw), which he claimed will destroy the social and cultural fabric of the state. The alliance between the two parties was created to fulfill political ambitions, he said at an election rally at Nalbari. "The Congress-AIDUF alliance is is not a mahajoth (grand alliance) but a mahakhot (great flaw) who have aligned to fulfill their political ambitions with the sole purpose to defeat BJP. But the people of Assam will reject them," the former Maharashtra chief minister said.

Ajmal, in reply, had alleged that the BJP was attempting to polarise the Hindus by pointing at him, invoking the 'Mughals' and portraying the Muslims as enemies, but said the ruling party will not succeed. Dismissing as "baseless" the BJP's charge of communalism against his All India United Democratic Front (AIUDF), Ajmal claimed "no outfit was more secular" than his party in Assam, and cited the AIUDF giving substantial representation to non-Muslims in elections in the past.

"The AIUDF is secular and will always remain so. But since the BJP is itself "communal" and plays communal politics, it looks at others through that lens," Ajmal said. "The BJP doesn't have any development issue to talk about.

"By showing my face, by portraying Muslims as enemies, and making communal comments, the BJP wants to polarise Hindus, but unlike last time, they will not succeed," he said.