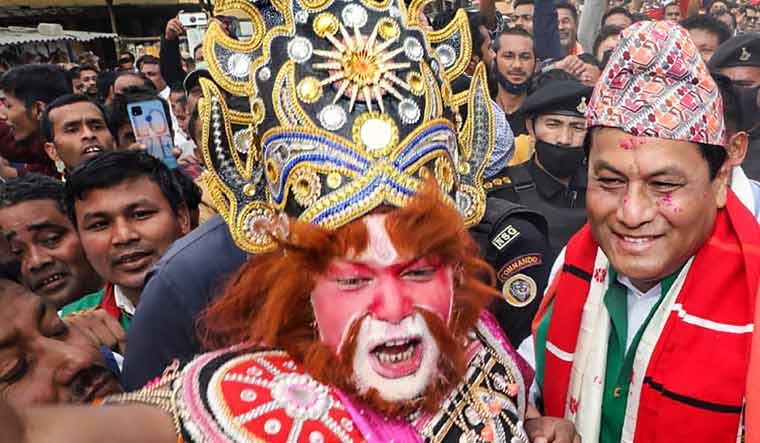 Assam's first BJP chief minister, Sarbananda Sonowal, has been conducting a determined campaign to highlight his government's successes ahead of the Assembly polls.

Earlier this week, Sonowal filed his nomination from Majuli constituency.

In an interview with The Indian Express, Sonowal said the BJP had implemented in "letter and spirit" whatever promises it had made to the people before the 2016 Assembly polls.

"Be it tackling corruption, pollution and extremism, or sealing the Indo-Bangla border… In every sector we have performed well visibly. Our government has taken both the Valleys of Assam—Brahmaputra and Barak—together and moved ahead on the path of development," Sonowal was quoted as telling The Indian Express.

Sonowal targeted the opposition alliance led by the Congress, in particular the grand old party's tie-up with Badruddin Ajmal's All India United Democratic Front (AIUDF), a party that has mostly won seats in areas with a considerable Muslim population.

Sonowal described the Congress-AIUDF tie-up as an "unholy nexus" that would not be accepted by the people of Assam.

Sonowal told The Indian Express, "They [Congress and AIUDF] pose a threat to the very existence of the people of Assam, Assamese culture and civilisation. During the long period of its rule, the Congress never cared about the rights, culture, heritage and identity of the people of Assam." Sonowal accused the Congress of being "interested in bringing illegal migrants into Assam and settling them illegally, just to create a vote bank".

Sonowal also played down the electoral significance of the Citizenship (Amendment) Act, which had triggered protests in Assam in late 2019. Sonowal declared, "CAA will no way be an issue this election" and alleged that opposition parties had misled the people of Assam.

The BJP has repeatedly targeted the Congress's tie-up with the AIUDF, despite Ajmal's party being a smaller regional force. Assam Cabinet Minister Himanta Biswa Sarma was quoted by NDTV as saying on Thursday, "In the polls, there will be a fight between the BJP and Congress-AIUDF. The regional parties have not been able to reach out to the people as they should have. Ajmal is always a factor given the area Assam is. He is a threat to the culture and civilisation."