Greta Thunberg’s remarks not a bilateral issue between India and Sweden: MEA 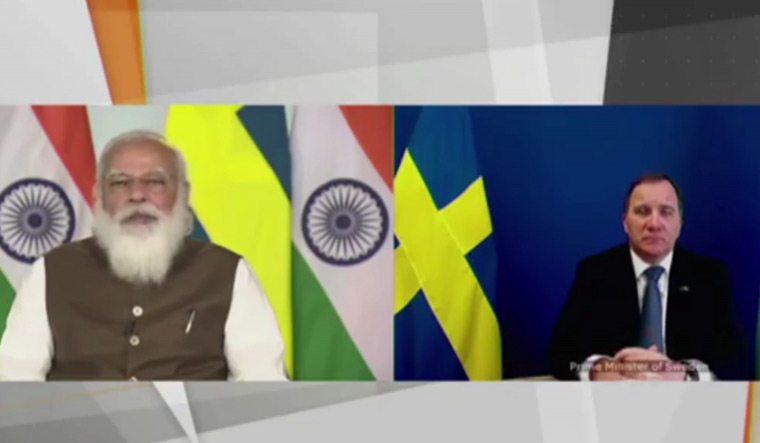 Young Swedish climate activist Greta Thunberg's recent comments on the farmers' protests in India do not form a bilateral issue between India and Sweden, and the matter did not come up during an online summit between the prime ministers of the two countries on Friday, the Ministry of External Affairs said.

At a special briefing after the summit, Vikas Swarup, Secretary (West) in the ministry, was asked whether the issue of Thunberg's comments on the farmers' protest was taken up by India with Sweden during the meeting.

"The answer is no. This is not a bilateral issue between India and Sweden," Swarup said.

Our close cooperation across areas like innovation, R&D, climate change and clean technology, trade & investment will contribute to sustainable recovery in the post-COVID world.

Modi expressed solidarity with the people of Sweden in the wake of the violent attack on March 3 and prayed for early recovery of the injured.

The leaders also noted the growing membership of the India-Sweden joint initiative—the Leadership Group on Industry Transition (LeadIT) that was launched during the UN Climate Action Summit in September 2019 in New York.

The meeting comes a month after Thunberg tweeted, "We stand in solidarity with the #FarmersProtest in India." This was followed by another tweet a day later, in which she shared "a toolkit for those who want to help".

While a number of international celebrities, including pop star Rihanna, had also tweeted in support of the farmers' protests, which entered its 100th day on Friday, the 'toolkit' matter became a major issue with the Delhi Police later registering FIRs against several people for allegedly trying to tarnish India's image.

The 'toolkit' document, listed various actions, including creating a "Twitter storm" and protesting outside Indian embassies, to support the farmers' protest.

According to the PMO, both leaders underlined that the longstanding close relations between India and Sweden were based on shared values of democracy, rule of law, pluralism, equality, freedom of speech, and respect for human rights. “They reaffirmed their strong commitment to work for multilateral-ism, rules-based international order, counter terrorism and peace and se-curity. They also acknowledged the growing salience of India’s partnership with the European Union and EU countries,”the PMO said.