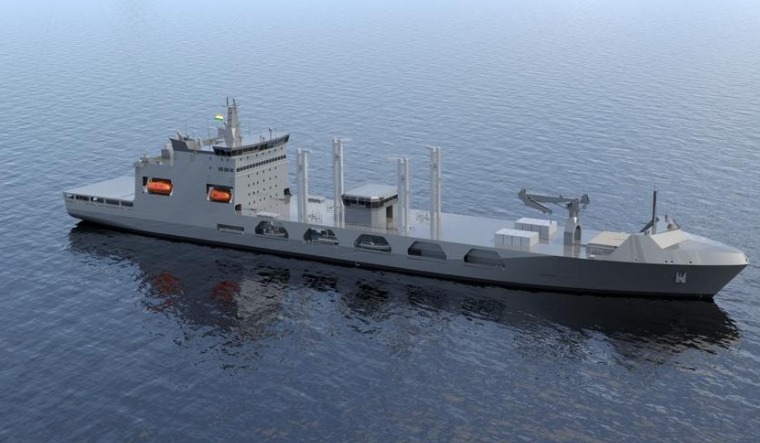 A concept of the fleet support ship | TAIS

On Tuesday, the Hindustan Times reported Hindustan Shipyard Limited, the Visakhapatnam-based shipbuilder, was expecting a major Indian Navy contract by this year-end.

The contract involves the construction of five 'fleet support ships', which have the vital role of resupplying warships at sea with spare parts, fuel, food, weapons and other equipment. In June 2019, Hindustan Shipyard had selected TAIS, a consortium of Turkish shipbuilding companies, as its partner for the fleet support ship project. The Turkish consortium was selected over offers from Russian and German companies.

According to the original agreement, TAIS would provide Hindustan Shipyard assistance in design and supply of machinery to build the five ships. The total value of the contract to Hindustan Shipyard would be about $2.3 billion, with the builder estimated to take about eight years to complete all five vessels.

The project to build the fleet support ships with Turkish assistance was delayed and faced uncertainty, in part due to Turkey's vocal support for Pakistan's stance on Jammu and Kashmir. On Monday, Hindustan Times quoted a source as saying, "The agreement with the Turkish consortium will kick in after HSL gets an order from the Indian Navy. If all goes well, that could happen by October 2021. Several Indian vendors will also be involved in the project." The Hindustan Times also reported "... the Turkish side has decided to go ahead with transfer of technology from the initial stages and back the 'Make in India' initiative..."

While less glamorous and menacing in appearance than sleek destroyers and mammoth aircraft carriers, the fleet support ships will be a key element in enabling the Indian Navy to stay at sea. Their importance has only increased as the Indian Navy has embraced the concept of 'mission-based deployment' of warships, with vessels remaining stationed away from base for several months.

Moreover, the five fleet support ships would be among the largest ships of the Indian Navy. Hindustan Times reported, "The vessels will be 230 metres long and have a displacement of 45,000 tonnes," which would make them just smaller than aircraft carriers.

A successful deal with Hindustan Shipyard would mark the biggest venture by Turkey into India's arms market. However, Turkey is already a key supplier to Pakistan.

In 2018, the Pakistan Navy commissioned the PNS Moawin, a fleet support ship, built with assistance from Turkish company STM. The Moawin is significantly smaller than the ships being offered to the Indian Navy, having a displacement of around 17,000 tonnes. In 2016, STM won a $350 million contract to upgrade Pakistan's fleet of French-designed Agosta 90B submarines with new sonars, periscopes, electronics and self-defence systems.

In 2018, Pakistan announced a contract with Turkey to build four 'MILGEM' class corvettes for the Pakistan Navy. Corvettes are small warships, displacing around 2,000 tonnes and that carry missiles and torpedoes for anti-ship and anti-submarine warfare and also air-defence roles. The MILGEM contract, valued at $1.5 billion, was in 2018, described as Turkey's largest defence export deal. A shipyard in Istanbul is building two MILGEM ships, while two are being built in Karachi. The four MILGEM class ships for Pakistan will, reportedly, carry a Chinese-built medium-range surface-to-air missile system.

Over the last decade, Turkish arms companies have spread their wings to emerge as an exporter of affordable weaponry. They have been most famous for sales of drones. However, Turkish companies have also sold small naval patrol craft and remote-controlled gun systems to countries in the Middle East and Asia.