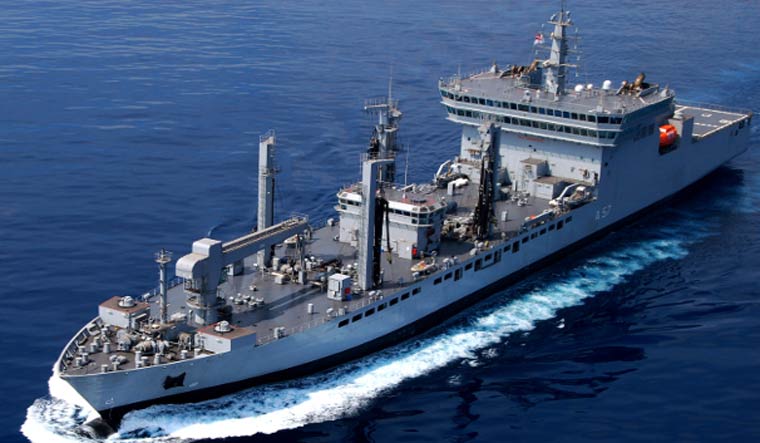 Media reports have suggested that a consortium of Turkish shipyards could lose a contract to provide assistance to Hindustan Shipyard Limited in Visakhapatnam to build five 45,000 tonne fleet support ships for the Indian Navy.

The fleet support ship project, announced in 2016, aims to provide the Indian Navy with auxiliary vessels that will ferry weapons, food, equipment and other items to replenish ships deployed at sea. The consortium of Turkish shipyards, led by Anadolu Shipyard, was selected to partner with Hindustan Shipyard in May. Anadolu Shipyard was to provide design assistance and equipment for the fleet support ship contract, which is estimated to have a total value of around $2.3 billion. Construction of the first fleet support ship was expected to be over in four years.

The Turkish shipyard consortium had not yet formally signed a contract with Hindustan Shipyard on the fleet support ship project.

The Economic Times reported security concerns have been raised about close ties of Turkish shipbuilders and the Pakistan Navy. The Economic Times added the access to Hindustan Shipyard by the Turkish partner could result in serious security issues. This is on account of Hindustan Shipyard's proximity to the Ship Building Centre, where the Indian Navy is building its nuclear-powered submarines.

In September, Turkish President Recep Tayyip Erdogan attended the start of construction of the first of four 'stealthy' warships for the Pakistan Navy at a shipyard in Istanbul. Pakistan and Turkey had agreed in 2018 for the supply of four MILGEM corvettes, which are multi-role warships designed in Turkey. Turkish companies are also modernising Pakistan's fleet of French-designed conventional submarines. Over a decade ago, the Pakistan Navy chose a Turkish design for its new class of missile-armed small craft.

On October 3, US defence publication Defense News quoted a ministry of defence official in India as saying "punitive action would bar Anadolu from carrying out any business with Hindustan because such a partnership could have grave consequences for India’s security".

“Involvement of [the] Turkish defense company will include overseeing construction, detailed manufacturing, engineering, selecting equipment, quality assurance, etc. This would mean a permanent presence of Turkish people at HSL yard. That is a big security risk,” an Indian Navy official told Defense News. The publication quoted an official as saying the Indian Navy will direct "Hindustan to immediately end ties with Anadolu".

Diplomatic ties between India and Turkey have been frayed since September when Erdogan supported Pakistan's attempts to internationalise the Jammu and Kashmir dispute. In a 'tit-for-tat' response on Thursday, the Indian government expressed concern about Turkey's ongoing invasion of Syria.

The likely ouster of the Turkish consortium is yet another setback for the Indian Navy's fleet support ship programme. Hindustan Shipyard had initially selected South Korean shipbuilding giant Hyundai Heavy Industries for the fleet support ship contract and held long discussions. However, a venture with Hyundai was dropped by October 2018 following disputes over quality assurance requirements.