A contract for 83 LCA Tejas for Rs 48,000 crore was signed after the inauguration 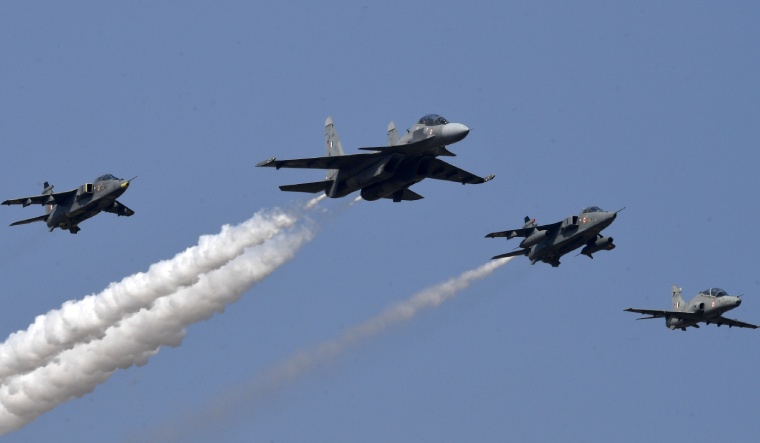 “In the universe of aviation, this show is one of the brightest galaxies,” said Defence Minister Rajnath Singh while inaugurating the 13th edition of Aero India in Bengaluru.

Soon after the inauguration of Aero India, Asia’s biggest defence and aerospace exhibition, on Wednesday, a contract for 83 LCA Tejas was also singed with Indian public sector giant Hindustan Aeronautics Limited. The contract is worth Rs 48,000 crore. These jets will come in two variants—73 of these will be ‘Tejas Mk-1A’ configuration while 10 jets will be the Tejas Mk-1 configuration, used as a ‘trainer aircraft’. All aircraft will be delivered by the end of 2030.

Tejas will also be considered for exports as several friendly foreign nations have shown interest in the fighter jet.

On Chinese military aggression on the Line of Actual Control (LAC), the defence minister said, “We have long witnessed unfortunate attempts to employ force to change status quo along our unresolved borders. India is vigilant and prepared to counter and defeat any misadventure to defend our people and the territorial integrity at all costs.”

Singh further said that India faces threats and challenges from multiple fronts. “India is a victim of state-sponsored and state-inflicted terrorism, which is now a global threat,” he said, without naming Pakistan.

2020 has been a challenging year for the entire world, he pointed out. Despite the events of last year adversely impacting the lives, livelihood, industrial growth, and economy of many countries due to the global pandemic, a large number of participants have attended the Aero India event, Singh added.

A total of 540 exhibitors including 80 foreign companies, defence ministers, delegates, service chiefs and officials from more than 55 nations are participating in the event.

“It reflects the growing optimism of the global community,” the defence minister added.

Talking about the Defence Ministers’ Conclave of the Indian Ocean Region (IOR), Singh said that India has a vast coastline, but our interests also lie beyond our shores.

“It includes our people who reside and work across continents, especially in IOR, It is our bounden duty to remain capable and willing to assist them in times of natural calamities and security challenges,” he added.

Defence ministers from Maldives, Ukraine, Equatorial Guinea, Iran, Comoros and Madagascar will be present to participate in Defence Ministers’ Conclave of Indian Ocean Region while others will join virtually. A total of 27 IOR countries is participating in the conclave.

“To achieve the twin goals of self-reliance and exports, we have set a target to achieve a turnover of Rs 1,75,000 crore, including export of Rs 35,000 crore in aerospace and defence goods and services by the year 2024,” Singh said.

He further said that the existing supply chains, developed by aerospace and engineering firms, an investor friendly government, with simplified procedures and fast-track business approvals through single window mechanism, combine to make Karnataka a very attractive destination for the industry.

This year’s event is restricted to business only as general public is not allowed to the exhibition.