Aero India to kick off with LCA Tejas deal 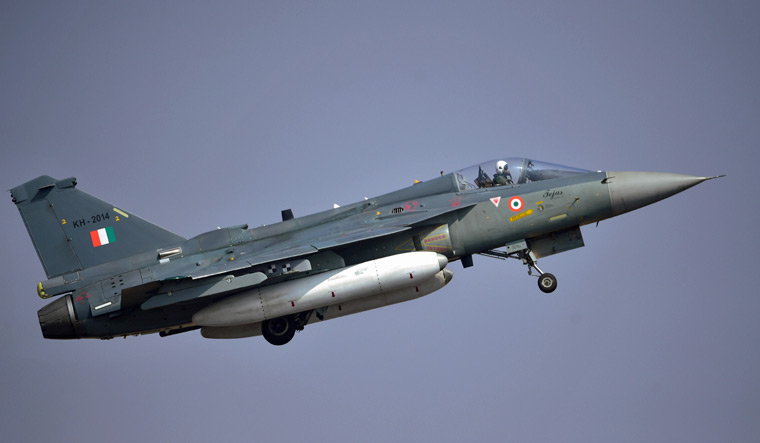 The 13th edition of Aero India—Asia's largest defence and aerospace exhibition—will begin from Wednesday with the inking of a Rs 47,000 crore deal for 83 Light Combat Aircraft 'Tejas' for the Indian Air Force (IAF).

The three-day biannual event, scheduled February 3-5, will be hosted by the Air Force Station Yelahanka in Bangaluru, which is going to be the first international aviation event in the COVID-19 era. Close to 80 nations are participating in the hybrid (online and offline) event, in which over 200 MoUs are expected to be signed.

Even the logo of this year's Aero India is inspired by the LCA. The tri-coloured figure of the Tejas LCA with the Ashok Chakra in the middle is the core concept of Aero India 2021.

After much delay, the Cabinet Committee on Security, last month, gave its go-ahead for the manufacturing of 83 LCA jets. This includes 73 LCA Tejas Mk-1A fighter aircraft and 10 LCA Tejas Mk-1 trainer aircraft at the cost of Rs 45,696 Crore along with design and development of infrastructure sanctions worth Rs 1,202 crore. It is the biggest ever single defence order for an Indian company and one that is expected to generate over 5,000 jobs.

"Tejas is not only indigenous, but it is also better than its foreign equivalents on several parameters and also comparatively cheaper. Many countries have shown interest in Tejas," Defence Minister Rajnath Singh said while adding that India would achieve the target of Rs 1.75 lakh crore in the field of defence manufacturing in few years. Early in the day, Singh inaugurated a second assembly line for the LCA at Hindustan Aeronautics Limited (HAL) which will increase the production rate from eight aircraft per year to 16.

HAL head R. Madhavan explained that deliveries would begin 36 months from the signing of the contract and delivery of all 83 jets would be completed in six years from then. This means the IAF would have 83 LCA Mk1 jets by the end of 2030.

The LCA Mk1 is an advanced version with four major capabilities over the current variant of LCA. These improvements are planned in operational roles, enhancing the combat ability and maintainability improvements through the incorporation of an AESA radar, an EW suite and BVR missile capabilities. The aircraft will have the inbuilt capability to fire BVR missiles such as the Derby missile, with the current Tejas having already proven such capability. The indigenously-developed BVR missile (ASTRA Mk1) has been identified to be integrated on the Mk1A, which will be the weapon of choice for the IAF.

This versatile weapon will give an edge to the LCA Tejas over its contemporaries in BVR warfare.

"The Aero India 2021, will help forge enormous global engagement with Indian defence industry, in the form of partnerships and investments, paving the path for a transformation of the world’s largest democracy into the world’s most powerful defence economy," Rajnath Singh said while releasing the curtain-raiser for the event. He added that over 600 exhibitors including 80 foreign companies, would showcase their defence manufacturing prowess at Aero India 2021 exhibition.

Speaking on the ten-month long military standoff with China on Ladakh border, Singh said, "I have no hesitation in saying that our robust stance, immediate and calibrated response and the unrelenting spirit of the soldiers on the borders led to stabilisation of the situation and we showed our resolve to defend the sovereignty and integrity of our country."

For the first time, a conclave of defence ministers of the Indian Ocean Region is planned, which will be attended by 27 countries. Besides the presence the of Iranian defence minister, representatives of 19 countries will be present at the show, while the rest would join virtually.

“The Indian Ocean Region (IOR) Defence Ministers conclave would reinforce the relevance of the region and its continued importance for stakeholders, from the perspective of trade, security and freedom or navigation,” Singh said, while speaking at Tuesday's curtain raiser event for the air show.

Due to COVID-19 pandemic restrictions, the event has been restricted to business days only and participants will need a negative RT-PCR test in order to physically attend.

The highlights of Aero India 2021, Rajnath Singh said that it would include the inauguration of India Pavilion based on the theme 'Rotary Wings, Conclave of Defence Ministers of IOR', the Conclave of Chiefs of Air Staff of various countries, The India – Russia Military Industrial Conference and the Startup Manthan, among others.