Atma Nirbhar defence: Indigenous projects to look out for at Aero India 2021

From unmanned drones to medium-lift helicopters, future of IAF will be on display 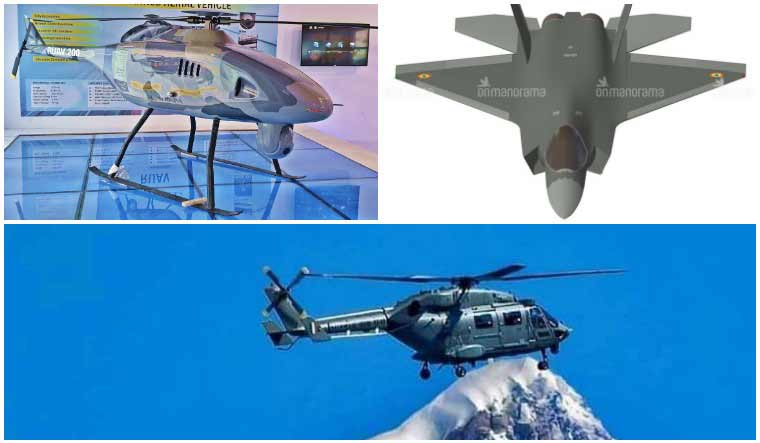 Defence Minister Rajnath Singh may have touted Aero India 2021 as the world’s “first-ever hybrid Aero & Defence exhibition”, but for aviation fans, the cause for excitement over the annual air show has less to do with its format and everything to do with its hardware.

The Aero India events, Asia’s largest air shows, have long been a place for foreign jet manufacturers to showcase their tried and tested hardware. 2021 will be no different: From the United State’s long-range bomber, the B-1 Lancer (AKA “the Bone”), to the Dassault Rafale, there will be enough eye candy on display for enthusiasts.

But, in a time of Atma Nirbhar, fans of the indigenous defence sector will also have plenty to be excited about. Taking to the sky will be the 'Aatmanirbhar Formation Flight' consisting of HAL products such as LCA trainer (LIFT Trainer), HTT-40, IJT, Advanced Hawk Mk 132 and Civil Do-228, which will fly in a special formation showcasing the spectrum of trainers and signifying self-sufficiency in the trainer segment.

Chief among them is the Light Combat Aircraft ‘Tejas’—with the order for 83 Mk1A models to be formally signed at the event.

But aside from India’s first and best foot forward in terms of an indigenously developed fighter jet, here are some of the most exciting indigenous defence projects that will make an appearance at this year’s Aero India.

After the first day of talks is over, the second day of Aero India 2021 will feature a presentation on HAL’s Medium Lift Helicopter (MLH). Intended to replace the Soviet-era Mi-17s, the MLH is an ambitious projectthat could substitute for up to Rs 4 lakh crore of imports in the future, according to HAL chairman R. Madhavan.

"One major project we are focusing on is to produce a helicopter in 10 to 12 tonnes category to replace the Mi-17 fleet. It will be an indigenous platform with the potential to manufacture around 500 helicopters. It will stop import of more than Rs 4 lakh crore worth of platforms from foreign countries," he told PTI in March 2020.

Madhavan said Rs 9,600 crore will be required for design as well as to produce the prototype of the helicopter.

"If we get the approval in 2020, we will be able to manufacture the first chopper by 2027. We are looking at producing at least 500 helicopters of the variant. It will be a major project we are working on," he said.

The ALH Dhruv reached a significant milestone in 2020 after HAL produced its 300th unit. The chopper, designed to handle high-altitude battlefields like those in Ladakh, has been a mainstay of the Indian military as well as of humanitarian efforts.

ALH Dhruvs were used to help Mauritius contain the devastating oil spill that took places off its waters in August last year.

As one of HAL’s most prolifically produced aircraft, the Dhruv is one of few Indian aircraft to find service in multiple countries.

However, the Dhruv’s reputation has been plagued by crashes, some of which saw it getting withdrawn from service in countries like Ecuador. Just a day before Republic Day, one ALH crash-landed in Jammu and Kashmir. One pilot later died in hospital.

The ALH will join its cousins, the Light Utility Helicopter and the Light Combat Helicopter in a flying display at the air show.

So, why be excited over a relatively old platform? According to the Ministry of Defence, a host of systems will be on display that can be implemented on India’s rotary-wing platforms. These include over seventeen products applicable including the Low Frequency Dunking Sonar (LFDS) on Advanced Light Helicopter (ALH), torpedoes that can be launched from helicopters, Airborne Software Defined Radio, Radar for Naval Utility, Light-weight Electro Optical Payload (LEOP), Dual Colour Missile Approach Warning System (DCMAWS), Digital RWR, Identification Friend or Foe (IFF) Mk XII, Combat Search & Rescue (CSAR), Heli-Net, SANT Missile and a dummy model of the Naval Anti-Ship Missile.

With plans to replace the Army’s aged Cheetah/Chetak fleet in the high altitude battlefields like the Siachen Glacier, the LUH received operational clearance in February 2020.

During the stand-off with China, the LUH landed in Ladakh for its final winter trials. It completed hot and high altitude trials in September at airfields including the Daulat Beg Oldie Advanced Landing Ground at 5,000 metres above mean sea level. This is the most strategic airfield located near the Galwan Valley flashpoint.

However, the IAF and Navy had both expressed intent to lease light utility helicopters on short duration in the meantime, making use of the lease option in defence procurement.

HAL has an in-principle order for 187 LUHs including 126 for the Indian Army and 61 for the IAF.

The third of HAL’s rotary wing aircraft, which, along with the ALH and LUH, will make a flight demonstration at the air show, the LCH is a deadly, lightweight chopper that is believed to be ideal for aerial combat against drones—and at high altitudes.

If there is a trend here, it is that of high altitude capability: India needs this to be able to maintain logistics and deterrence presence at the high-altitude border locations with Pakistan and China alike.

Amid the flare-up with China, India has seen China move its own indigenous platforms close to the border. China’s Global Times had touted the PLA’s deployment of the Z-10 attack helicopters to Northwest China’s high-altitude desert regions and Southwest China’s Qinghai-Tibet Plateau.

HAL hopes to get an order for 15 limited series production LCHs, a proposal that is expected to go to the Cabinet Committee on Security, according to Chairman R. Madhavan.

Perhaps the most anticipated aircraft in the indigenously developed category, the ‘Warrior’ drone will have a replica on display at Aero India 2021. Spotted by Vayu Aerospace Review, the drone was seen alongside a swarm drone system.

Part of the Combat Air Teaming System (CATS) programme, the Warrior is expected to accompany a manned aircraft like a Tejas and provide it support and penetrate “heavily defended enemy airspace”. Low-observable, and with air-to-air and air-to-ground missiles, it can supplement the effectiveness of IAF missions while reducing the number of pilot lives lost from risky missinos.

According to an NDTV report, the first prototypes are expected to fly within 3-5 years

Another drone, this one is a helicopter. While drones are normally associated with fixed wing aircraft, heli-drones are growing in popularity: One is even being deployed by NASA to Mars, where it is expected to performed the first powered flight on any planet besides earth.

Weighing in at just 200kg, the RUAV-200 is expected to have an endurance of 180 minutes and a capability to operate at temperatures ranging from -35 degrees to 55 degrees celsius—at least, based on the specifications of the propulsion system it was scouting for in November 2020.

Its primary function will be in intelligence, surveillance, and reconnaissance (ISR) operations, and can also be used for humanitarian assistance and disaster relief (HADR) missions.

If there are drone systems, there must also be anti-drone systems. The devastating power of drones in modern combat was made evident by Azerbaijan and Turkey’s use of them in the conflict with Armenia in 2020.

With small, civilian drones increasingly used by non-state actors—and the cost of missiles that can shoot them down often more than the cost of the drones themselves, there is need for effective anti-drone systems, with the Border Security Force (BSF) keen on one it can deploy along the Indo-Pakistna border.

During Prime Minister Narendra Modi’s Independence Day address in 2020, a DRDO-designed anti-drone system was deployed, armed with a combination of jamming capacity and even a Directed Energy Weapon.

Largescale production of such a system could enhance India’s defences against UAV attacks.

Though the Naval variant of the LCA Tejas has made huge strides of late, demonstrating carrier-landing capability, the Indian Navy has held to its stated desire of a Twin-Engine Deck-Based Fighter for deployment on Indian aircraft carriers INS Vikramaditya and the upcoming IAC-1 (INS Vikrant).

Aimed at replacing the Russian MiG-29Ks, TEDBK will feature a Delta-Canard configuration, powered by two General Electric F-414 engines (the same engines used on the Tejas Mk2). According to the Aeronautical Development Agency (ADA), it will had an indigenously devloped Uttam AESA radar and carry an advanced version of the ASTRA air-to-air missile. According to Navy Chief Admiral Karambir Singh before the Navy Day in December 2020, the TEDBF is expected to be ready by 2026.

It is hard to look at a country’s aviation inventory without searching for its fifth-generation offering. Whether it’s the United States’ F-22 raptor, Russia’s Su-57, or China’s J-20, stealth fighters remain king at the moment. For India, the Advanced Medium Combat Aircraft (AMCA) has been a project long in the making.

The AMCA, at last report, will be a 5th generation fighter with 6th generation technology, with the IAF’s wish list for it including directed energy weapons. Besides this, it will have all-weather capabilities, be stealthy, and be have super-cruise capability. It is also planned to have both manned and unmanned operational capability.

HAL Chairman R. Madhavan recently said the aim would be to implement the AMCA project with private participation as well, under the framework of a special purpose vehicle.